The first model of the French Loxo 32 (9.5m) was powered by a fuel-efficient inboard diesel consuming a pint of fuel per mile at 12 knots.

Pogo Structures, a French builder of racing and performance sailing yachts, expanded into the power market with the Loxo 32 (9.5m/31.17‘). This simple low-impact coastal cruiser is now also offered with outboard propulsion.

Pogo Structures has been a household name with sailboat racers who aspire to compete in the Mini Transat, as the yard offered competitive production boats in the Mini 6.50 class, where many future ocean-racing stars cut their teeth. Pogo has always been at the cutting edge of design and lightweight composite construction. The latest incarnation of Mini 6.50s, the Guillaume Verdier–designed Pogo 3 Foiler, has a blunt scow-like bow, a canting ballast system, and, of course, retractable foils to lift the hull clear of the water. It’s no surprise that when the yard rolled out its first powerboat about three years ago, expectations were high.

The company had been toying with the idea of a modestly powered displacement vessel for several years before settling on the Loxo 32 design, which resembles a sled under an engine: lightweight (1,650 kg/3,638 lbs with one inboard engine) and slippery as an eel, meaning sipping, not guzzling, gas. The manufacturer’s performance data claims approximately 1 pint of fuel (a tad less than 0.5 l) per mile at 12 knots.

The Loxo hull is vacuum-infused fiberglass sandwich construction with a PVC core (polyester resin standard, vinylester optional). The interior is simple and functional with a small galley with cooktop and fridge, a head/shower compartment with hot water, and four bunks. An option for an inside steering station makes sense for cruising colder latitudes. 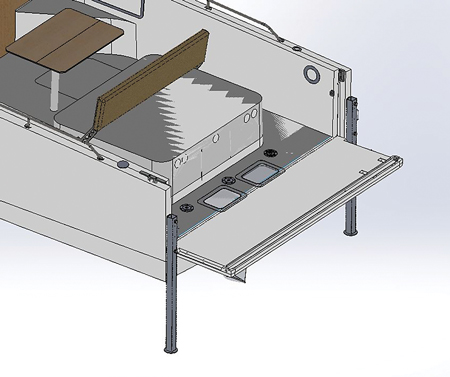 An interesting and practical feature for beaching the boat in venues with big tidal differences is the two retractable struts that help keep the boat upright when it falls dry.

As it was designed for Brittany, a region with big tides, the boat has a unique feature of beachability: two vertical struts can be deployed to keep the hull level when it falls dry.

Originally the Loxo was powered by either a single Volvo Penta D2-75 diesel or twin 30-hp (23-kW) engines, while the electric version can be ordered with either one or two Oceanvolt 15-kW drives and a hefty 53.2-kW/h battery, with a range of 44 nautical miles at 8 knots or 28 miles at 12 knots.

While the diesel version attains a top speed of around 20 knots, the electric Loxo 32 tops out at 14. Pogo has yet to provide performance data for the outboard model; the company suggested a maximum of 150 hp (113 kW) (or 2 x 75 hp) as the upper limit for power. The outboard’s interior layout is identical to the diesel and electric versions, but a newer rendering shows a different cockpit arrangement for seating and sun pad, due to the absence of the engine box. 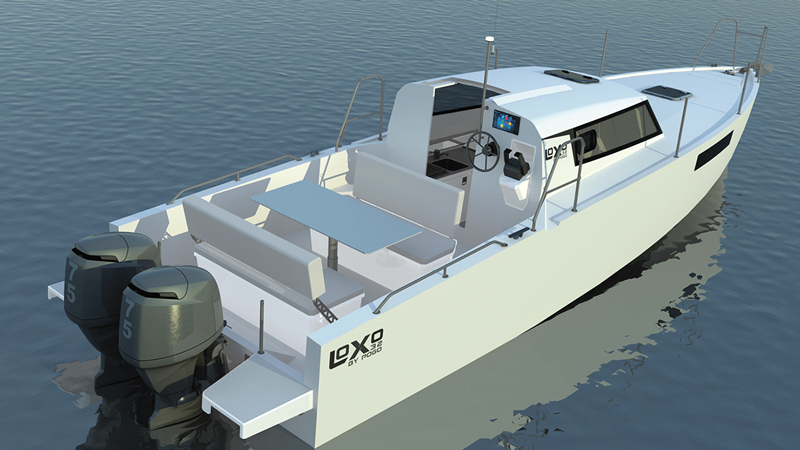 In 2020, the Pogo yard added a twinoutboard version to satisfy the demand for more speed and more space in the aft cockpit.