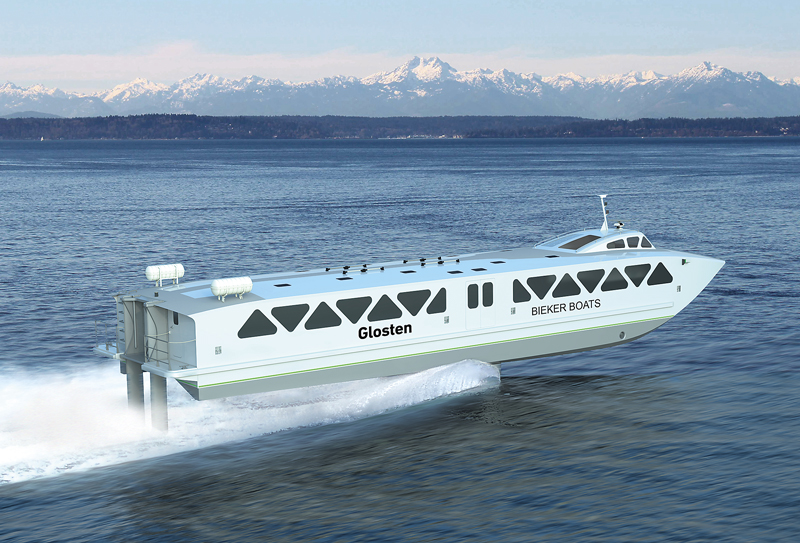 An artist’s rendering of a fully foilborne passenger ferry running between Seattle and other ports on Puget Sound.

The trickle down of foiling technology from the America’s Cup to commercial passenger transport applications is about to speed up. Sea Bubbles (see Professional BoatBuilder No. 173) offered promise as a small foiling ferry, but has yet to deliver.

Hoping for better success, a U.S. project is shaping up in the Northwest: Glosten, a Seattle-headquartered marine design and consulting firm and Bieker Boats of Anacortes, Washington, recently announced the award of a $373,000 U.S. Department of Transportation’s Federal Transit Administration Accelerating Innovative Mobility grant partnership for developing a low-wake foiling passenger ferry.

Three Washington State ports (Anacortes, Bellingham, Skagit) contributed $100,000, while other partners—including Washington Maritime Blue, a nonprofit strategic alliance to foster maritime innovation and sustainability, and Kitsap Transit, the lead entity for the grant—added $139,000 of in-kind support to bring the total committed funds to $612,000. This money will fund the vessel’s preliminary design, the study of feasible routes, and the development of a business model to attract interest and investment by potential clients, nationally and internationally. This collaboration draws on Bieker Boats’ design expertise for Oracle Team USA’s America’s Cup foiling catamarans and foil structural design for Kitsap Transit’s foil-assisted catamaran ferries, coupled to Glosten’s experience in designing passenger vessels and workboats for public and private clients. Those include the Gee’s Bend ferry along the Freedom Trail in Alabama, the first all-electric car ferry in the U.S., which was converted from diesel propulsion.

There are numerous incentives to revisit hydrofoils, which have been around for more than a century in military, racing, and pleasure craft as well as in commercial passenger ferries (see PBB No. 172): Higher speeds cut commute time, drastic reduction of wake protects marine habitat and sensitive shoreside infrastructure, and fuel cost is saved. Glosten estimates twice the fuel efficiency and triple the standard passenger miles-per-gallon ratio compared to conventional craft of similar size; and the potential for a significant drop in CO2 emissions, which could total about 3,700 t (over 8 million lbs) with a diesel-powered ferry connecting Seattle and Tacoma. Smaller, simpler propulsion systems also lead to drastically lower maintenance costs. On the flip side, the cost of design, engineering, and construction of such a craft is higher, because the technology is more complex.

Initial specifications of the 150-passenger Glosten/Bieker craft are: LOA 30.26m (99.3‘), beam 6.77m (22.2‘), draft from 1.6m (5.2‘) in foiling mode to 3.3m (10.8‘) in displacement operation; power 2 x 515 kW (690 hp); and range 215 nm @ 35 kts cruising speed for the diesel-electric version. Construction materials and techniques are reminiscent of aerospace and America’s Cup technologies, i.e., carbon fiber with foam cores above the waterline and massive carbon fiber laminates for struts and foils, “achieving the same strength and stiffness of high-strength steel at 20% of the weight,” as the press release points out.

The main foil is amidships, and a smaller set is installed aft. Not shown are the propulsion pods.

“We are exploring several propulsion options, including diesel, diesel-electric, and fully electric,” said Glosten’s program manager, Matthew Lankowski, 36, who grew up in Maine and holds master’s degrees in naval architecture/marine engineering and manufacturing from the University of Michigan. According  to Lankowski, the type of propulsion chosen depends on the length of the chosen route and the potential to set up dockside infrastructure.

“We did a concept with diesel direct-drive propulsion, but ended up with two 90° gearboxes, which is not the simplest thing,” said Paul Bieker. “Glosten calculated a version with electric drive and lithium-ion batteries that compared to the weight of a fully tanked diesel version. The maximum [electric] range looks like 20 miles, so it would necessitate fast charging capacities or swapping out batteries, which would make charging requirements less stringent.”

From Hydrogen to Pod Propulsors

Even a hydrogen option is on the table, Lankowski said. With California exploring fuel cells as an alternative energy source, a consortium that includes Glosten, Bieker, and DNV GL, the world’s largest registrar and classification society, are pursuing grant opportunities to develop a hydrogen-fuel-cell vessel for the Bay Area. Hydrogen is the lightest element in the periodic table and the most abundant chemical substance in the universe. It offers higher energy density than batteries, which makes it suitable as rocket propellant and for fuel cells that convert hydrogen and oxygen into electricity, thus potentially extending the range of electric vessels.

Passengers love speed and comfort, but the top concern by far for the operator is reliability. “What happens if you hit something?” Lankowski asked rhetorically. “That is why we have developed a collision-absorption system that can be quickly reset, so that the transit is not interrupted in the infrequent but inevitable event that the foils impact a log or other floating debris.” The concept for the foiling ferry includes the development of propulsors that resemble a scaled-up version of pod drives similar to those already available for recreational craft, Lankowski said. These pods must be compact and streamlined so they can be integrated with the submerged foil-and-strut structure. 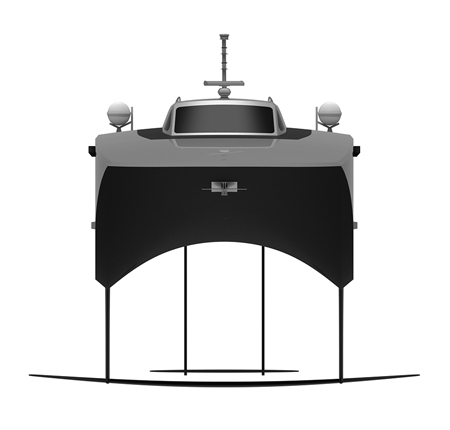 The main foil is amidships, and a smaller set is installed aft. Not shown are the propulsion pods.

Much of the success will depend on finding the right energy source and technology for the application, because so many technologies are in the running. Gothenburg, Sweden, is testing the concept of an electric fast-ferry called BB Green, an Air Supported Vessel with a carbon fiber hull that rides on an air cushion to reduce drag and wake. It uses innovative lithium-titanium-oxide (LTO) batteries, which are well suited for rapid charging and discharging.

In Ireland, Artemis Technologies, which emerged from another former America’s Cup team, is spearheading a consortium of public and private partners including aircraft manufacturer Bombardier. It was awarded a £33-million grant by the U.K. government to develop a zero-emission ferry that looks to pursue a path similar to Glosten’s and Bieker’s.

Interestingly, two of Bieker’s former mates at Oracle Team USA, German aerospace engineers Christopher Erbelding and Thomas Hahn, are now listed as members of Artemis’s engineering staff.  So, the race is on using America’s Cup high-tech—not for the Auld Mug but for foiling ferries that redefine fast, convenient, and low-emission public transport.