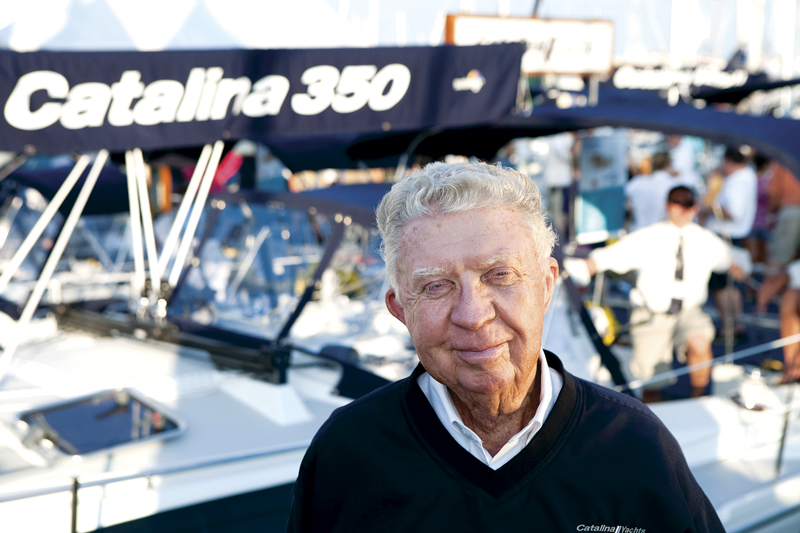 Frank Butler, founder of the largest builder of sailboats in the U.S., died November 15, 2020, in Long Beach, California. He was 92.

Butler founded Catalina Yachts in 1969, in North Hollywood, carefully tending through the many vagaries of the boatbuilding business, surviving when other stalwarts like Pearson Yachts, Cal, and O’Day foundered. The company estimates it has built more than 85,000 boats over the years, ranging from daysailers to the current queen of the fleet, the Catalina 545 (16m).

A self-described loner, Butler said he always liked to draw, as far back as grammar school. After high school in Glendale he joined the U.S. Navy, followed by college and a job at a machine shop, and then as an engineer designing tools. “Most of the engineers that I was designing with had no shop experience,” he told me years ago when I was researching Heart of Glass, Fiberglass Boats and the Men Who Made Them. “They didn’t know the headaches. My boss had worked in a shop and that’s why we got along.” Until one day the boss asked Butler if he’d like to go into business with him. Butler said yes, and told his wife, Jean, whom he had met at a school dance. At the agreed-upon date, Butler began cleaning his desk. The other employees began snickering. Butler was confused. The boss came up to him and said, “You’re really thinking of going into business? I was only kidding.” Butler wasn’t. He said to his boss, “I told my wife, I told my friends I’m going into business. Now if I go home and I don’t go into business, I’m a liar. I’m going into business.”

Butler quit and got a job as a salesman during the day, and at night he made machine parts on an engine lathe in his garage for a company called Bendix. “I wore a suit during the day and machine shop clothes at night. I became one of Bendix’s largest machine shop vendors,” Butler said. Bendix was just one of his customers.

Some years later he drove by a small company, Fiber­glass Sailboats, and stopped in. “I always had a couple of small sailboats and small powerboats,” he said. He ended up buying a 23‘ [7m] Super Satellite, which was promised in five weeks. But when he arrived with his wife and kids in the car to pick it up, there was no boat and no man who sold it to him. However, there was a small crew of about eight men working, so Butler told Jean to take the kids home and come back at five. Then he turned to the workers. “I told them my name and that I was taking over the shop right now,” he told me. “I don’t like to fight. But I’ve never walked from a fight. Now, anybody who doesn’t agree with me, we’re going outside.”

The men fell in and with Frank in charge spent the next 10 days finishing his boat. Eventually the company owner showed up, apologized, and gave Butler tooling for three boats. That was 1961.

Three years later he was ready to market a new model, and approached the well-known design firm Sparkman & Stephens. According to Butler, his contact at S&S told him, “Oh yeah, we can probably get a design for you. Takes about two years. We’d have to check your financial ability.” “He had more excuses than Carter has pills,” Butler said. “So I designed the Coronado 25 [7.62m], and that was a breakthrough in the fiberglass field because it was the first boat that ever had a fiberglass interior. That idea came from Lockheed [Martin].”

The rest, as they say, is history. Butler sold Coronado, his first boatbuilding venture, to Whitaker Corp and founded Catalina in 1969.

The company set production records for numbers of models built—the Catalina 22 and 27 (7.3m and 8.18m) were notable. In 1979–82, Patrick Childress beefed up a Catalina 27 and made a solo circumnavigation. Though Catalinas were regarded as “plain vanilla” boats—the only color offered is white—they were sound if not exciting. The model line expanded to include Nacra and Prindle beach catamarans, and daysailers such as the Capri 22 (6.71m). Later the company bought portions of Morgan Yachts’ line, including the Out Island 41 (12.57m), which had helped launch the bareboat charter trade in the Caribbean. Production of that model continued in its Largo, Florida, home, and eventually Butler moved the entire Catalina operation to Morgan’s old plant in Largo, in part because of environmental restrictions in California. 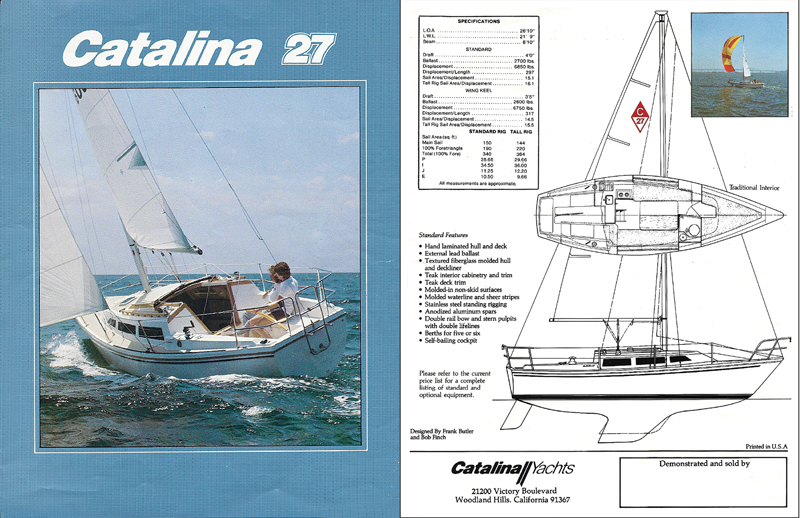 Brochure of the bestselling Catalina 27

For the 1990 Congressional Cup held off Long Beach, Butler designed and built 11 Catalina 37s specifically for the match-racing event. For that and other contributions to sailing, in 2013 he was inducted into the National Sailing Hall of Fame.

Early on, Butler gave his sales manager, Sharon Day, and production manager, Gerry Douglas, a stake in the business, a fortuitous decision that has served the company well, with the latter also taking over design. Last year I was asked to help judge Cruising World magazine’s annual Boat of the Year awards. Among the nominees in the Best Large Monohull category was the Catalina 545. It was up against a formidable group of Europe’s best, and winning seemed unthinkable. After inspecting and sailing all the contenders, our group of judges hashed over their attributes. And we settled on the Catalina 545 as Boat of the Year because it hit all the right notes in terms of design, engineering, construction, and systems. It’s not the first but only the latest of their boats to win this distinction. It’s a remarkable achievement for a company that for so long endured the reputation of “plain vanilla,” and “entry level.”

When I took the editorial helm of Practical Sailor in 1989, a magazine that does not accept advertising money and is known for its critical tone in boat reviews, the publication’s relationship with Catalina was tense. So at an upcoming boat show, I determined to make a sort of rapprochement with Frank Butler.

We met at a quiet seating area in the food court area and sat opposite one another at a small table. “Tell me about yourself,” he said. Well, I thought, any topic to avoid boats is probably good. Something about Frank, his face, the way about him, and the need to win him over prompted me to tell him a few stories I rarely share with others, including how my 12-year-old son Peter had been killed playing on a railroad trestle. Frank said, “I lost a son, too.” We looked into each other’s tear-filled eyes and suddenly boats were irrelevant. We had more important things to talk about.