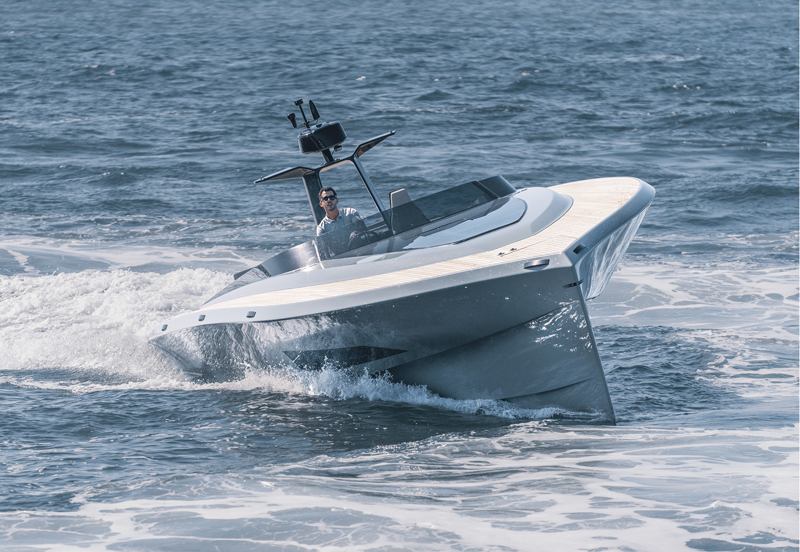 The SAY 42 (12.96m), the latest addition to the German builder’s line of high-end powerboats, like her smaller sister, the 29, has distinctive lines, with a high, narrow bow that cuts through chop.

Recently word reached us from SAY Carbon Yachts, the German builder of sleek lightweight runabouts, about the delivery of the first new SAY 42 (12.96m). Company CEO Karl Wagner—who in a previous career built Carbo Tech GmbH, which became the world’s largest supplier of carbon fiber monocoques for automotive and racing applications—contributed a design brief (see “a = F/m” in PBB No. 180), explaining the thinking and the math that went into the SAY 29, which set a world speed record for production-built electric boats. The 29 is the predecessor and inspiration for the new 42-footer, which replaces the previous model of the same length. Different from the 29, the 42 is available only with combustion-power systems and later will be offered with a hybrid drive. These are the engine choices and their respective manufacturer-rated maximum rpm and power, plus the potential top speeds (as given by SAY):

Wagner, who is adamant about introducing rigorous automotive-production discipline to boatbuilding, also is a stickler for styling that departs from the usual. Calling the new boat “a sportscar on the water,” he hired Munich-based design studio KET to give the 42 the same signature high, plumb, wave-cutting bow we have seen on the 29, a wide-open stern, and a big swim platform that extends on both sides of the hull. The latter feature also “stabilizes the hull and ensures maximum steadiness while enabling incredible cornering speeds,” according to SAY’s marketing material. 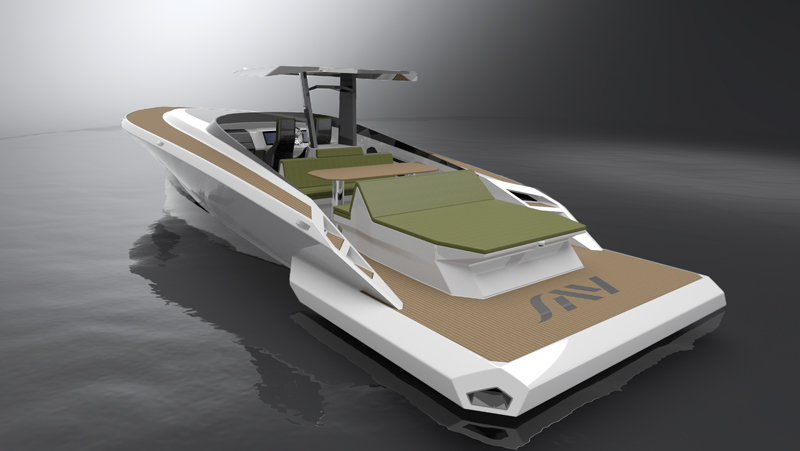 The stern, which runs out to a wraparound swim platform, adds stability for fast cornering.

The hull is built from epoxy-infused T300 and T700 carbon fiber sandwich employing closed-cell foam of various thicknesses and an autoclave oven for curing smaller parts. This effort keeps the hull weight to a scant 1,460 kg (3,219 lbs) and the total dry weight, including two Volvo Penta engines and a Seakeeper 2 gyro stabilizer, to 4.5 tons (9,921 lbs)—less than half of what conventionally built boats of similar size (e.g., 420 Boston Whaler Outrage) weigh without engines. SAY also claims the 42 “consumes up to 50% less fuel than similar yachts on the market.” When pressed for specifics, the company said with the Volvo DPS engines, fuel consumption is about 40 l (10.5 gal) per hour at 20 knots.

For the electronics, SAY installs a CZone CAN bus system to interface with two Garmin MFDs to control all essential functions via touch-screen from the helm station. Other notable features are the carbon mast with instrument carrier, fully adjustable carbon seats, and push-button deployment and retrieval of the bow anchor from a storage well it shares with 30m (98‘) of stainless-steel chain. Suggested retail price (ex VAT and shipping) starts at 681,200€ ($800,000), and each boat can be custom configured online.