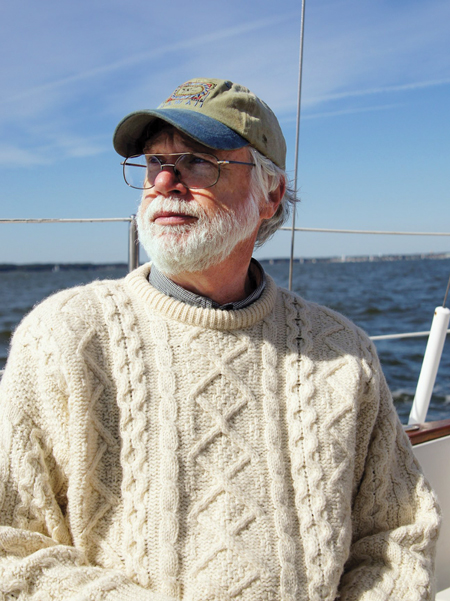 George Hazen, whose work revolutionized yachting as a pastime, a sport, and an industry, died from cancer on December 23, 2020, in Annapolis, Maryland. He was 69.

Many boat owners won’t know the name George Hazen, but most yacht designers do. It’s a bit of a cliché to say he was a boat designer’s designer, but in fact he was, in so many ways. My connection with George started in the 1970s, when we both worked in the design office of C&C Yachts in Canada.

George was already becoming a name in the technical side of sailboat design. While obtaining his Master’s of Naval Architecture degree at MIT, he was instrumental in research for the Irving Pratt Project, an initiative to develop a sailboat velocity prediction program (VPP) that would become the backbone of the Measurement Handicap System (MHS) and the International Measurement System (IMS) in the 1980s. This expertise landed him on C&C’s doorstep with skills that were a little intimidating for those of us still in the days of hand-drawn and hand-calculated everything.

I can admit we were slow to adopt this new way of designing, as the office did not even own a computer. Undaunted, George worked some magic with the technology available—programmable calculators. He converted many of the “cookbook” design processes to programmable versions and in particular had the keel design process refined and stored on those little magnetic strips that you zipped through a Hewlett Packard HP41-C to run the program.

With limited access to a computer powerful enough to run his new VPP code, George put his hand to designing boats as well as analyzing. The classic C&C 40 (12.09m) and the Boston Whaler 4.6 (15‘) dinghy both received the Hazen touch.

George returned to Annapolis in 1979 to open Design Systems and Services and began in earnest to develop a set of computer programs for the professional and amateur yacht designer. I was honored to work with him for a year on that suite of software but have always admitted that George was the brains behind it all, and my biggest contribution was coming up with the name FastYacht. It included modules for hull design and fairing, hydrostatics, keel and rudder design, sail plan analysis, and the final performance assessment with the PPP (performance prediction program). For the era, this was nothing short of a revolutionary set of programs to aid the designer, all running on a first-generation desktop computer. If you have had occasion to view the “polar plot” of velocities for your boat, then you are looking at the work of George Hazen.

In George’s own words, “In the past, the only means that designers have had to evaluate their designs was to build the boat, take it out sailing, and hope that the boat performed well. Because of this rather expensive evaluation procedure, rather than go out on a limb and risk the success of a radical idea, most designers tend to be rather conservative, basing their designs on what has been proven in the past, making only minor changes to the tried-and-true. With the Performance module of FastYacht, designs can be tested without any investment in construction.”

“While he did not consider himself a mathematician, a hallmark of George’s career was his ability to apply mathematics to create practical software tools that could be used easily by other naval architects,” wrote George’s professional partner and friend Bruce Hays in his remembrance of Hazen. His creations were not ivory-tower research projects; they often became commercial-grade software tools that are used today by thousands of designers and builders around the world. In addition to these tools, George was noted for the engineering insights he was able to offer to designers on their projects; he was once accurately called “a naval architect’s naval architect.”

George’s strengths combined an impressive command of the computer coding of complex mathematical and logical processes along with the practical knowledge of how designers like to work. In a series of logical steps, FastYacht became FastShip (for big-ship designers), while his company went through several takeovers as various people saw the merit in his skill and knowledge. In its final iteration, FastShip became a plug-in for Rhino3D software, as RhinoMarine, and now lives on as Orca3D under the leadership of George’s partners and friends Larry Leibman and Bruce Hays.

He also continued to hone his design skills in the Dickerson 37 (11.28m), a nicely proportioned cruising sailboat offered as a sloop and a ketch.

George was one of the smartest people I have known. There was obviously the deep technical knowledge of things aero- and hydro-dynamic—most of us function with just a fraction of his command of the subject. That combined with his ability to code his knowledge into a software program that others could master and use to great effect. But there was the human side of George: soft-spoken but confident, husband and father, superb guitar player, and knowledgeable in almost any subject you put to him—a level of human being that all of us can aspire to but few will achieve.

He was brilliant yet humble, always willing to share his vast knowledge. Sometimes asking him a question was an all-day proposition, because he would not only tell you the answer but could speak for hours about all the issues surrounding the question, a process we referred to as getting “hazened.”

“In one memorable meeting, George kept an entire room full of naval architects spell-bound while discussing the relevance of metacentric shelf,” recalled Bill Cook. “After the meeting we all had to run back to our computers and bookshelves to see if we could figure out how to calculate it, having never heard of it before. I used to joke to George that for him, intelligence was not measured in IQ but in a concept called the HQ, or Hawking Quotient, which was the page of Stephen Hawking’s A Brief History of Time at which the reader became lost and confused. George’s score outpaced mine by an embarrassing margin.”

Yacht designers are thankful to have worked with George, or to have used his software to develop better boats. And many boat owners who have won a race or made a long passage in a seaworthy boat are unknowingly indebted to him. Even though George has left us, his influence on the industry carries on.

“George’s passing is the loss of a truly great talent and wonderful person,” said fellow designer Bruce Farr. “Our run of successes, especially during the ’80s, were in no small part a testament to George’s expertise and his willingness to develop these tools for a relatively small market as larger opportunities beckoned. While George was the consummate software engineer and naval architect, I believe there was also a good bit of traditional ‘yacht designer’ there, as well as an enthusiastic, honest gentleman.”