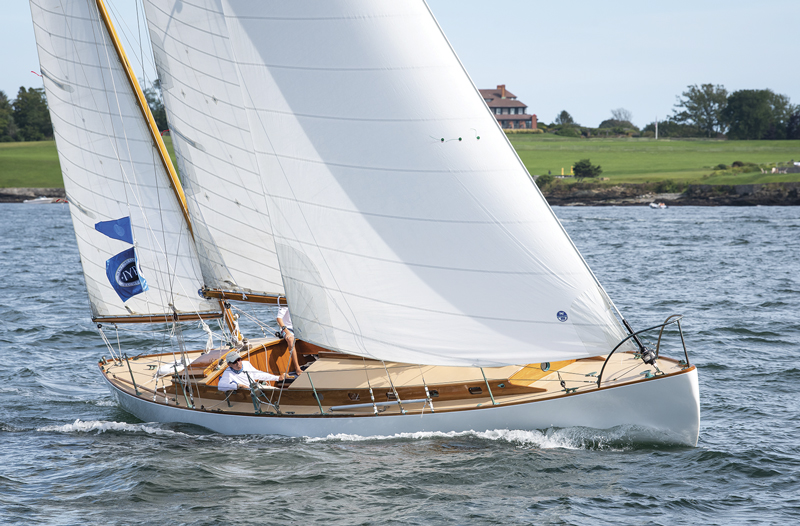 Commissioned by Verner Z. Reed, then the commodore of the Ida Lewis Yacht Club in Newport, Rhode Island, Arion emerged from the shed of The Anchorage in Warren, Rhode Island, where several hundred smaller fiberglass boats had been built from 1946 on. “Built of no-upkeep ‘Dyeresin,’ she’s the world’s largest one piece [sic] reinforced plastic yacht,” a magazine ad heralded the boat. “Smooth as an eel and strong as steel, won’t twist, work or leak. Her construction, prolonging life and GREATLY REDUCING THE COST OF YACHTING, makes her the Boat of the Future,” the ad continued. 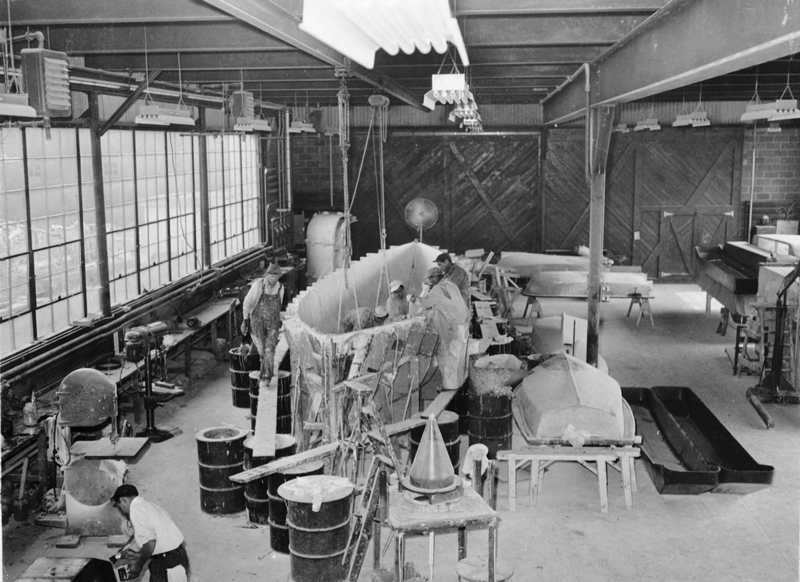 At The Anchorage, personal protection was not yet mandatory for yard workers during hull layup.

Yachting magazine detailed the novel building technique: “The construction is interesting since there are no frames, longitudinal stringers or ‘backbone,’ rigidity being obtained by skin thickness and hull form. Her skin varies from ¼“ [6mm] at the sheer to over 1“ [25mm] at the keel pad.… Decks, cabin tops and watertight cockpit are of waterproof plywood covered with glass cloth and pigmented resin.”

Arion Rings in the Revolution

Her sweet lines and light weight made Arion a force on the race course. And builder W.J.H. Dyer, who’s also the resin’s name patron, was quoted in a local paper: “The hull is quite flexible, not brittle…it is easy and inexpensive to repair.” To say nothing about superior resistance to damage inflicted by marine growth and the lack of appeal to pests like termites or worms, which can wreak havoc on wooden hulls. Her many virtues should have assured Arion’s commercial success, but that’s not how it panned out. 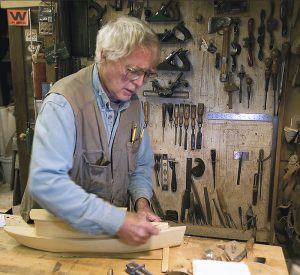 Boatbuilder Damian McLaughlin saved and restored Arion before relaunching her in 2001.

Even though Dyer’s predictions were spot-on and this vessel was a catalyst for a boatbuilding materials revolution that created a new industry and put millions of people on the water, Arion remained a unicorn. Eventually she fell on hard times as a derelict boat in a field, until she was rescued from a potential date with the chainsaw. Her savior was Massachusetts boatbuilder Damian McLaughlin, who made his name constructing oceangoing multihulls designed by the likes of Dick Newick, Chris White, and James Wharram, and also has a predilection for conventional monohull designs by Herres­hoff, Sparkman & Stephens, and Chuck Paine. Arion was just what McLaughlin had been looking for, “long, lean, light and low,” as he states in “The Story of Arion,” posted on his website. In essence, he wanted a bigger version of L. Francis Herreshoff’s seminal canoe-bodied 28‘ (8.53 m) ketch Rozinante, a successful design that still enjoys a following today.

Cosmetically, Arion was a disaster after many years of neglect, but her structure was sound, without any noticeable delamination or excessive moisture in the fiberglass. McLaughlin bought her and started the rehab. Matthew Smith assisted with a lines plan, hydrostatic calculations, and drawings for a new rig. McLaughlin set to work, replacing interior, deck, deckhouse, keel, and aft cabin before relaunching her in Pocasset, Massachusetts, in June 2001, nearly 50 years to the day when Arion first tasted the brine.

“To me it was the resurrection of an antiquity, an archeological excavation, and the assembly of what I thought to be the perfect combination for sailing/cruising,” he explains on his website. “I have been ecstatic over the discoveries of the attributes of this vessel [that I] learned while rebuilding her, getting her tuned, and just sailing her.” 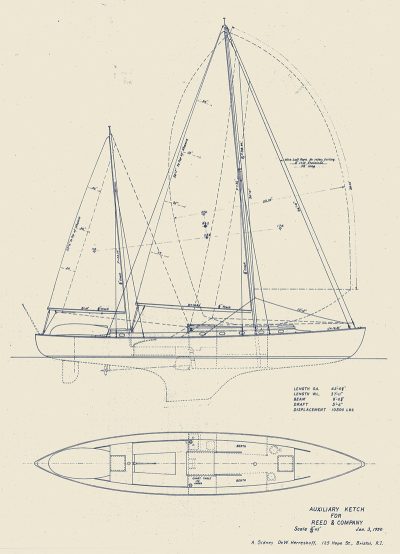 Arion is not a stripped-out camper, he explains, with hull and deck getting plenty of support from six full bulkheads, while floor timbers support the keel. In terms of creature comforts, he lists galley, stove, sink and refrigerator, small settee, enclosed head, two single and two double berths in two separate cabins, and 14 opening ports, inspired by L. Francis Herreshoff’s Goldenball. The boat even has plenty of standing headroom, as long as one stays on deck. “It’s a sailboat, not a kitchen and a bathroom you can take sailing,” McLaughlin quipped, because to him, good boats must move well. Sailing the boat reefed down with his wife, he claims the knotmeter hit 13.9. “She is very fast, with an easy motion; she sails herself with almost no input on the tiller, and she maneuvers inside the harbor like a 15‘ day sailor [sic],” he writes in his website. To drive home the point he tells this anecdote: “On Arion the batteries went dead at times because I never used the engine, always sailed her to and from the mooring.”

That does not mean he did not find plenty to improve. McLaughlin said he disliked the sag in the headstay, so he reinforced the wooden spars with carbon fiber, changed the rig to 7/8, and added running backstays. Increasing the size of the main and doubling the rudder’s depth [not length, Ed.] “made a big difference in handling,” he said.

Only a year later, McLaughlin started building the Walter Greene, a wooden replica of Arion for a client who’d fallen in love with the shape and appearance of this boat (see also WoodenBoat No. 200, page 74), thus reversing the common procedure that brings about fiberglass copies of wooden boats (e.g., Dragon, Nordic Folkboat, Herreshoff’s 12½ and Alerion, and many others). Walter Greene very much resembled Arion, but her new wooden hull was somewhat lighter, which prompted McLaughlin to add 1,000 lbs of ballast in the keel, which made her stiffer upwind and helped her win the Opera House Cup.

In 2012, Arion was bought by Steve Frary, a now-retired business executive who had grown up sailing Blue Jays in Barrington, Rhode Island, and later was a deckhand on the Bill of Rights, a replica of the gaff schooner Wanderer. Frary found an online advertisement for the boat and liked the idea of owning a Sidney Herreshoff design, as he had also owned boats by Nathanael Greene Herreshoff and L. Francis Herreshoff.

He also liked the looks of this double-ended ketch and the center cockpit arrangement, which was unusual for Herreshoff. Primarily, Frary bought the boat for practical reasons and the performance potential hinted by her long waterline, narrow beam, and relatively light displacement. “All sailors are racers at some point,” he laughed as he explained that he wanted a “daysailer with weekend capabilities for my young family, a boat that was fun and easy to sail, either single- or doublehanded,” adding, “I did not quite understand what I had until I got deeper into the project.” 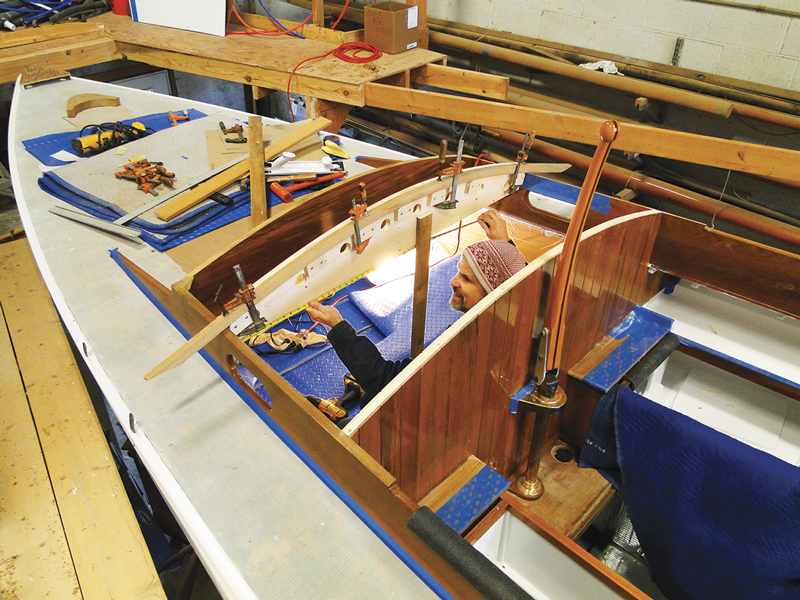 A deckbeam is fitted on the aft cabin.

That project was a no-expenses-spared affair at Snediker Yacht Restoration in Pawcatuck, Connecticut, including a new cabintop with two layers of 1⁄4“ marine ply and 1⁄4“ Sitka spruce, with V-jointed staving running fore-and-aft, and varnished white oak deckbeams, all covered with one layer of glass cloth and Dynel on the outside and then Awlgripped. “We built it upside down on a female jig off the boat to allow prefinishing and installation of the deckbeams,” explained David Snediker. The interior is all teak, with a cypress ceiling. The yard also installed all new systems and tankage, a new 28-hp Yanmar 3YM30 auxiliary diesel, and built new main and staysail booms. “The original glass is in amazingly good shape. We repaired only about 12 blisters,” Snediker added. “Her hull construction is interesting, [consisting] of pigmented resin and narrow cloth strips. Hull thickness tapers from about 1⁄4“ at the sheer to 13⁄4“ at the garboard area, [with] yellow pine deadwood between the bottom of the keel and the ballast. Ballast bolts are Monel.”

While the restoration added some amenities, it also increased Arion’s displacement to around 11,800 lbs (5.35 t), according to Frary.  “She [still] covers a lot of ground quickly, doing 8.5 knots, no problem,” he said. He mostly day-sails and races her around Narragansett Bay, with an occasional overnighter. Truth is that her narrow beam of 8‘ and her low freeboard, which define her distinctive looks and generate compliments, can also make for a wet ride when the breeze and chop are up. 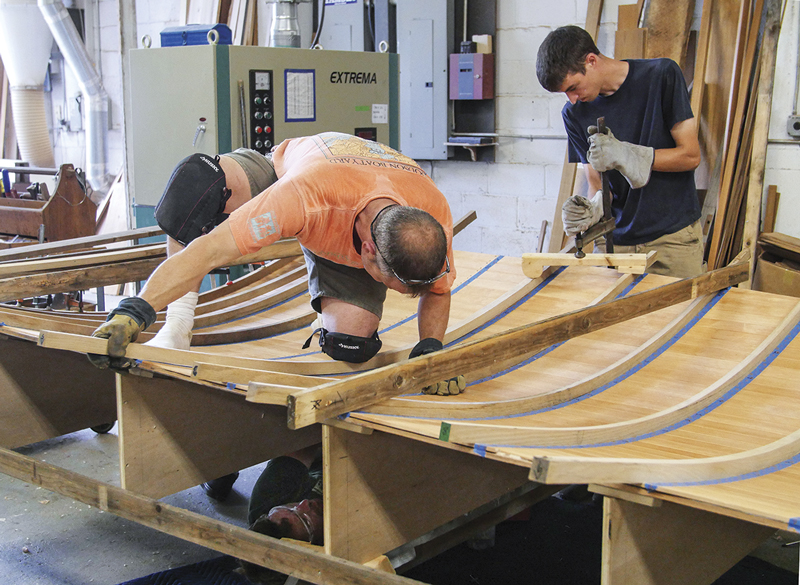 On the other hand, the boat is “300% overbuilt,” as Frary observed, so she can take a licking. Her robust constitution is the reason she survived her first 70 years and is still around to dazzle those who like the classic looks of a Herreshoff design. But back in the day, building this performance-oriented design in a new and unproven material was a huge gamble for Dyer. As history shows, his vision for fiberglass as a boatbuilding material was correct, but no other boats were built from Arion’s mold, which makes her one of a kind and adds to her appeal.

Boldly predicting that she “could be around for another 100 years,” Frary said he intends to pass her down to his daughter Elizabeth and son Nathaniel. They are already steeped in her lore and the history that informed her design. Halsey Herreshoff, Sidney’s son, was a high school senior when the vessel was launched in 1951. He accompanied his father and Bill Dyer on the shakedown cruise, and several years ago used Sidney’s original drawings to carve a white-oak tiller, which he presented to Frary’s children.