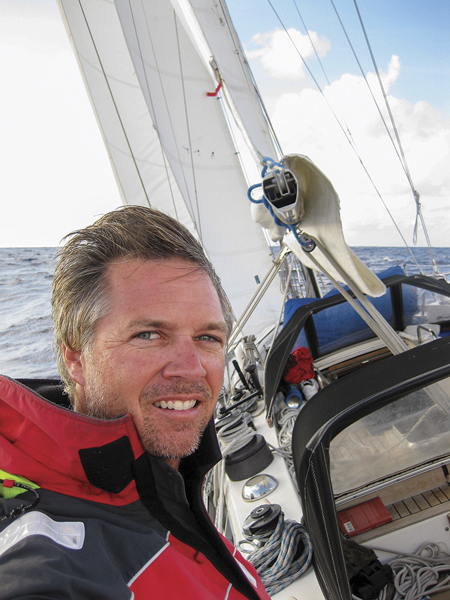 Anyone who has been around boats in a professional or obsessed way for more than a few years has encountered new technologies or materials that promise to change the future of boating and then completely fail to deliver. Most times, those disappointments are products that simply don’t meet the needs of boatbuilders and owners. In recent years, this has been particularly true for networked electronics and cloud-based services for onboard systems, where brilliant tech bros looking to bring their magic to the marine sector completely miss the subtle differences in environment and user expectations that define our industry.

They’d have done well to take a lesson from the career of Dan Harper, founder of Newport, Rhode Island–based Siren Marine, who died unexpectedly January 21, 2021, at the age of 51. Long before he set his mind to developing a monitoring, tracking, and control system that connects owners to their boats remotely through a combination of cloud technology, cell phone communications, and a series of onboard sensors and networked electronics, Harper was an accomplished professional sailor. His founding of Siren Marine in 2011 came after years of sailing Corban, his own 42‘ (12.8m) Ron Holland–designed Swan, campaigning classic yachts for their owners, and overseeing annual maintenance and rebuilds of a number of vessels.

In short, Harper knew what could go wrong on the water, what onboard flaws or failures were likely to become disasters, and what components were most useful for owners to monitor to assure the safety and seaworthiness of their boats. For an experienced cruising sailor who was often away from his own boat while campaigning or caring for others’, it’s easy to see where the concern and uncertainty-driven intuition came from that helped Harper envisage and build Pixie and Sprite, Siren Marine’s first boat-tracking and -monitoring systems. Any boat owner or hired crew knows the knot of doubt that tightens in you when the boat is out of sight and you run through the mental lists of the hose clamps that could fail, how quickly the bilge pump would flatten the batteries, how easily the wind could shift and the anchor drag. This would have been second nature to Harper. It helped that he had the technical know-how to have founded a hypertext search software and digital publishing company in the 1990s.

I never met Dan Harper, but based on the volume and intensity of messages that landed on my desk after his death, I began to believe I might have been the only one in the trade who had not. Our mutual friend Frank Landers (Gougeon Brothers) knew Harper when he was readying Corban for ocean voyaging and had sailed with him on a delivery trip. He recalls the genesis of Siren Marine like this: “Dan took a need that he identified in his mind and turned it into a reality and a viable business model. Siren had a fit, and it was something that people needed.… He was always break­ing new boundaries for himself and others.”

The obituaries, tributes, and memorial comments about Harper repeatedly identify the passion he had for all he did, the breadth of his interests and abilities—electronics, music, sailing, flying, celestial navigation, teaching—and his relentless good humor and ceaseless tinkering.

His son Anson says in a remembrance, it was Harper’s early years of tinkering that “would foster the fundamental skills that would last a lifetime; skills that would eventually lead him to build the first prototype of a product that changed the world.”

Well, it certainly changed the equation for many anxiety-plagued boat owners, which means it changed our world, and will likely continue to as Siren Marine completes initiatives like a just-announced strategic alliance with Yamaha Marine, and other projects that started on Harper’s watch with his sailor’s eye to improving modern boating, from the inside.