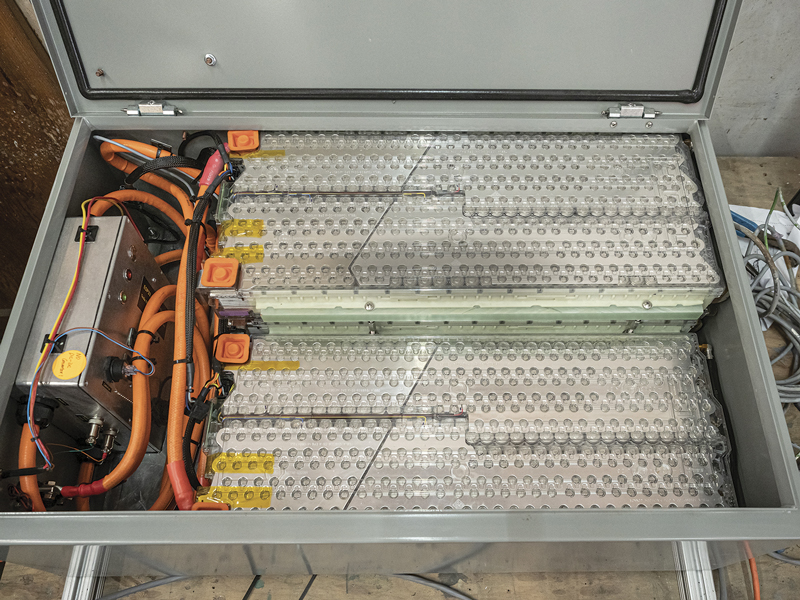 This 26.5-kWh battery with a nominal rating of 259.8 Ah was assembled by Revision Marine from used Tesla cells.

Electric propulsion is all the rage now, but the high cost of high-tech batteries is still a deterrent to many owners who are considering the switch. Taking a page from automotive chop shops that salvage parts from damaged or otherwise obsolete vehicles, Revision Marine in Port Townsend, Washington, is exploring a similar approach to reduce sticker shock for electric energy storage by using reclaimed batteries from wrecked Teslas.

The firm’s latest project is the electrification of a 1983- vintage 28‘ (8.53m) CBP trawler that serves as the Port Townsend Sailing Association’s (PTSA) race committee boat and as an occasional cocktail cruiser for her private owner. Revision built a 26.5-kWh battery pack from five modules, each consisting of 444 NCA 18650 3.6V lithium-ion cells sourced from EVTV Motor Verks, a Missouri outfit that sells used batteries extracted from damaged Teslas, as well as other electric-mobility kit. The company blog, maintained by Jack Rickard, shares technical advice and videos galore while also treating readers to headlines such as “Battery Nerd Porn for Tesla Model 3 2170 Cells,” “Tesla Kristallnacht – The CyberTruck Wardrobe Malfunction,” and “Ships, Boats, Islands and Tesla Batteries for Solar Energy Storage.” 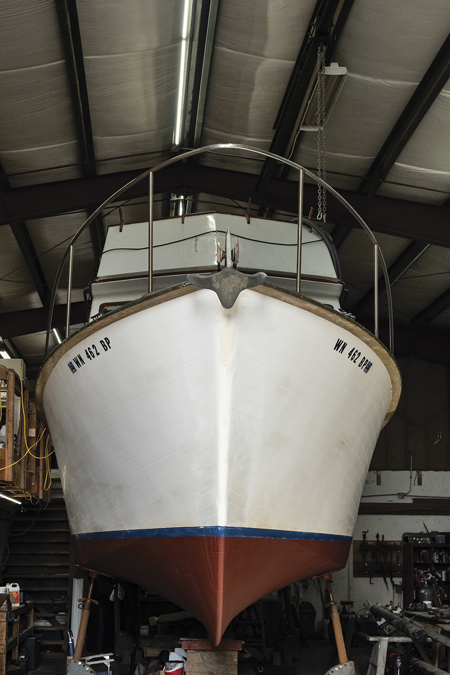 “None of those [car] batteries [has] more than 20,000 miles on [it],” said Matt Mortensen, co-owner with Chris Brignoli of Revision Marine, citing EVTV’s guarantee, which presumably is based on information gleaned from used-vehicle listings on Carfax. “We are using the EVTV ESP32 battery management system (BMS) that was designed to work in unison with the individual module factory-installed Tesla BMS.” The battery bank for the trawler is relatively small and has a nominal voltage of 110V, Mortensen explained, a top-charge voltage of 125V, and a bottom discharge of around 90V. To calculate amp-hours he divided 26.5 kWh by 110V nominal for a rating of 259.8 Ah.

During a shop visit, the vessel’s owner, Steven Scharf, who also serves as PTSA’s vice-president, explained his decision to go electric: “The boat was equipped with an old Ford Lehman diesel that smoked. I put $2,000 into replacement parts, which you can’t buy new, but it was at the end of its useful life.” Some friends thought “it was stupid” to replace an old, tired diesel with a new one and urged him to look into electric propulsion, which brought him to Revision Marine. “It made sense,” Scharf added, “as the boat only needs enough power to get back to port in adverse conditions.”

To accommodate the switch, the old engine, the V-drive, and all the tanks were removed from under the aft deck, which creates more than enough space for the battery, the Elco motor, and assorted kit such as fenders and racing buoys. The drive unit is an Elco EP-40 induction motor, a proven technology that has been around for some time. It operates at 108V, uses batteries from 165 Ah to 225 Ah and, according to Elco, produces the equivalent of 40 hp (75 kW). 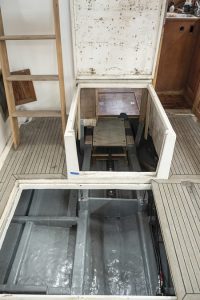 The old engineroom will be partially occupied by the electric motor and battery.

“Additionally, it provides the correct output rpm for displacement-vessel propellers, eliminating the need for a reduction gear,” Morten­sen said. “Here we see efficiency gains [over] a permanent-magnet motor.” Asked about the warranty, Mortensen said Revision Marine “will provide a 5-year warranty on our assembly and installation, [while] EVTV does not provide a warranty as the modules are repurposed.”

Revision Marine said it conducted a complete tow test of the vessel using a load sensor to record bollard pull values to calculate the power required for different speeds during calm conditions, assuming a propeller efficiency of 40%. The relevant specifications of the trawler are 27‘ (8.23m) waterline length, 9‘4“ (2.83m) beam, 6‘ (1.83m) draft, and 21,000-lb (9.5-t) displacement.

According to the spreadsheet Revision provided, Scharf can expect a runtime of 3.7 hours and a range of 18.5 nautical miles when cruising at 5 knots. When creeping along at 2 knots, runtime and range increase to 44 hours and 88.1 nautical miles, respectively, while goosing the boat to 7 knots will drain the battery in little more than one hour and limit range to 7.5 nautical miles.

Both are acceptable to Scharf. “I’m hoping to get 5 knots,” he said while giving me a tour of the vessel. “And I don’t need a long-range boat.” Indeed, setting up the starting line on Port Townsend Bay and collecting a couple of course marks on the way back to the marina do not require extravagant battery capacity. To extend the range, say, for a weekend in the San Juan Islands, the awning of the aft deck has room for up to 2,000 watts of solar panels, and in a pinch, he said, he could also use a portable gasoline generator to top off the batteries.