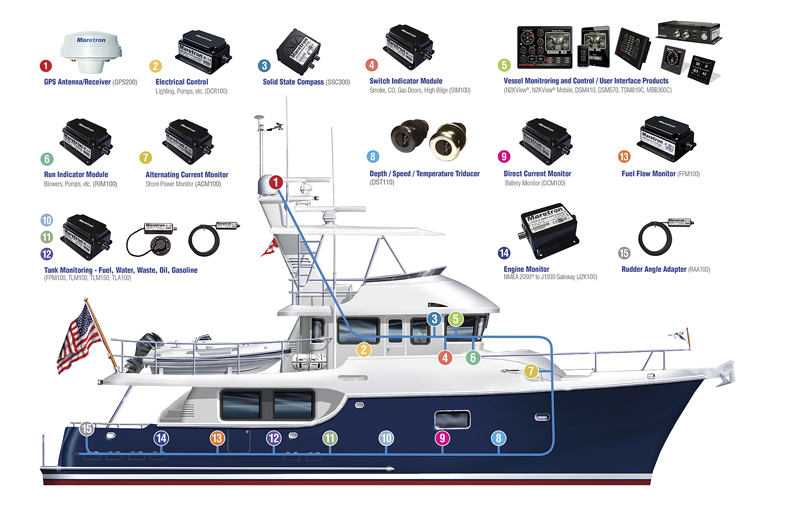 From the GPS receiver up top to the rudder-angle adapter in the stern, sensors, monitoring, and user interface devices, Maretron MPower components can be integrated in the NMEA-2000 monitoring network.

The world has gone digital, and there’s no going back. Cars, homes, and boats all get what advocates characterize as “smarter” with apps, sensors, and monitoring devices that communicate with each other and users over data networks. In the case of networked onboard electronics, most comply with the National Marine Electronics Association’s NMEA 2000 or other Controller Area Network’s CAN bus standards. One application gaining attention lately is digital switching, which is used for monitoring and controlling onboard devices and is replacing analog power distribution systems with their fuses, mechanical switches, toggles, and circuit breakers.

In their marketing efforts, manufacturers of digital switching tout its three Cs: convenience, control, and connectivity. One key capability of this technology is checking and managing a vessel’s electrical and electronic functions intuitively through programmable HMIs (human-machine interfaces), either on the boat via multifunctional devices (MFDs) or remotely via apps on portable electronic devices connected to the Internet. 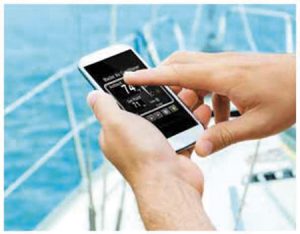 Companies like CZone (part of Power Products, LLC ) and PowerPlex (E-T-A Engineering Technology), already com­mon names in the marine sector, were joined by Carling Technologies’ Maretron, which rolled out its MPower digital switching solution earlier this year. It is a modular system built for the NMEA 2000 network architecture and aims to simplify adding or expanding vessel automation. MPower products currently include 12- and 16-channel DC load controller modules, a 6-rocker digital switch module, customizable keypads, and a 12-channel optional by­­pass module. Circuits can be paralleled, and modules are ignition protected.

Maretron says vessel size is not an important factor and that at the time of this writing more than 60 boats—Bertram, Ocean Alexander, West Bay, and several custom builds—have been equipped with MPower load-controller modules that typically handle lights, pumps, motors, and electronics. Mare­tron also pointed out each circuit breaker’s programmable trip thresholds, current monitoring, and dimming, in addition to MPower’s compatibility with Carling’s OctoPlex distributed AC and DC power-control system.

Who should install and service the technology to ensure proper functionality and reliability? “We’d prefer NMEA 2000–certified installers or ABYC or NMMA installers who are familiar with boat electrical [and] in particular NMEA 2000,” said application specialist Joe Wynn. “We probably have some do-it-yourself guys who successfully attempt to install the system,” he added, pointing to the software tools that support such efforts: N2KBuilder, a Windows-based program that helps plan, document, and validate the design of NMEA 2000 networks; and the N2K­Analyzer, which offers a detailed view of all networked devices for configuration, updates, and troubleshooting.

“Marine Electronics Installers or Advanced Marine Electronics Installers understand the basics of the NMEA 2000 structure and [our] tools to program, troubleshoot, or design systems,” said Scott Johnson, director of sales, marine electronics. At the same time, OEMs often must customize such systems, which requires consulting with tech support to assist with configuration, programming, and setup, according to Johnson. 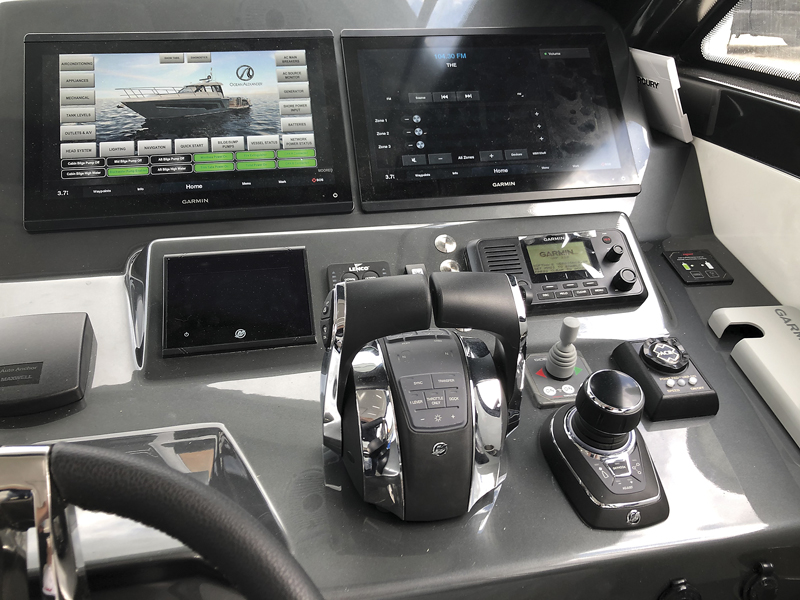 Maretron, listed as an integrator of Garmin’s OneHelm control system, also added preconfigured MPower packages for common applications. Builders or installers can choose a system that matches the existing components and download the appropriate configuration files before using the N2KAnalyzer software to load the configurations into each device.

To gauge market sentiment, we contacted some custom builders who have installed or upgraded digital switching systems. They are aware of the systems’ upsides and their rising user acceptance, but they also keep watching the battle for market share with similar yacht automation and monitoring systems that are “device agnostic,” use programmable logic controllers, standard web browsers, and cloud-computing platforms. “[Digital switching] allows for controlling large loads at a distance without the need of long wires running throughout the boat,” one executive told me. “Secondly, there is the ability to use multiple displays to control one circuit, and the third big win…is the ability to show the user exactly what’s being turned on/off, thus eliminating ambiguity.”

At the same time, many builders are not ready to kick proven analog technology to the curb and go all-in on digital switching, citing complexity, cost considerations, dependence on computer savvy and certified technicians for installation and troubleshooting, especially if problems occur in critical functions or in remote locations. Electronics experts are especially concerned about the vulnerability of networked onboard electronics to damage from lightning strikes (see James Cote’s letter to the editor, on page 6).

Rather than being on the bleeding edge, the builders I spoke to said they are happy to wait for digital switching to further mature and evolve as more manufacturers enter the market, which also will bring prices down.