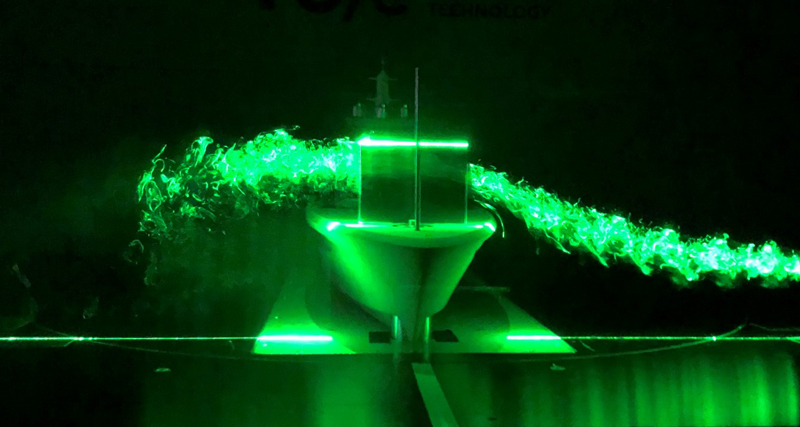 Wind-tunnel testing of a 1:50 scale model for a superyacht movie screen design

From the galaxy of superyachts, word reached us about presumably the largest foredeck outdoor movie screen to be installed on a yacht. It has a 270-sq-ft area (25m²) and will expand entertainment options aboard a 262‘ (80m) model currently under construction. This superyacht movie screen was designed, engineered, and built by two Dutch companies with a track record in this industry. Solico Engineering B.V., a firm that specializes in composite engineering for maritime, architectural, military,and industrial applications, collaborated with Structor Engineering BV, which designs telescopic masts, concealed hinges, and locks for hatches and bulkhead doors.

“[It] is believed to be the largest screen of its type developed to date, with the highly engineered composite structure providing exceptional image quality on a screen that can be deployed by a single crew member in less than four minutes,” the press release explains. The client specified a screen that was quick to deploy by two crew members and would provide a “stable screen image in up to 14 knots of wind.” To achieve the desired qualities of this superyacht movie screen, engineers focused on building a lightweight, stiff framework that could withstand wind loads. A 1:50 scale model of the yacht and screen were tested in the University of Eindhoven’s wind tunnel, which yielded reliable design input data for the screen support structure.

Asking about some of the tools and materials used, we learned that Solico chose Siemens Femap Nastran and Solidworks for 3D-modeling. The telescoping carbon tubes are made of filament winding from standard-modulus fiber. “The critical components proved to be the vertical side supports that maintain the screen tension, and some high [modulus] fibers were used here,” Solico explained. “These parts were done in epoxy prepregs using multiaxial, woven, and UD reinforcements on Corecell M80 cores for increased local stiffness.” The construction was with epoxy prepreg consolidated under vacuum and oven-cured. 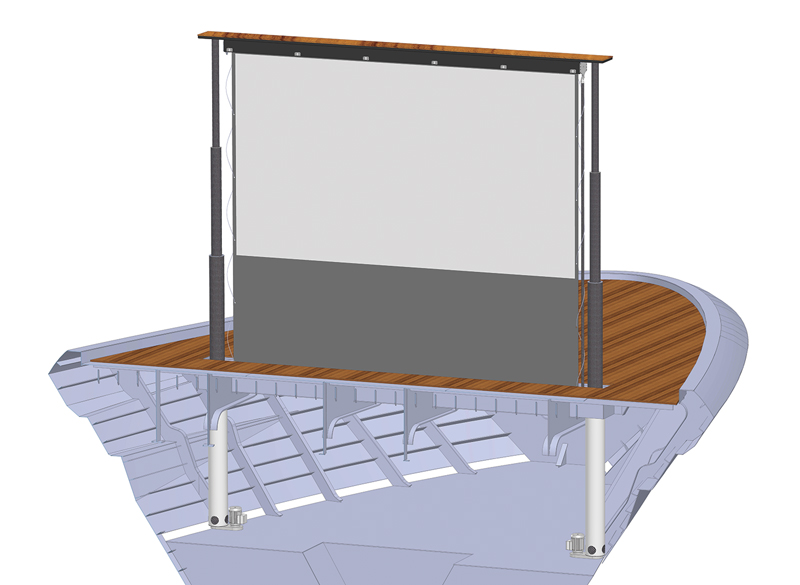 The frame comprises telescoping carbon tubes and side supports built of epoxy
prepregs with multiaxial, woven, and unidirectional reinforcements on Corecell core.

In service, the screen rises vertically from its storage space beneath the foredeck, pulled up by the telescopic cylinders as they rise from deck level, simultaneously raising part of the deck structure that houses the system for the screen. “Once the cylinders are at their top limit, a guidance track on either side swivels into position,” Solico said. “The furled-up fabric is then unrolled to form the screen and tensioned in all directions to avoid wrinkling.”

Specific details about the screen material are proprietary, but it is a semitranslucent fabric, making it suitable for projection from behind the screen. “A lot of research has gone into finding the appropriate fabric,” said Solico.

During the eight-month project, Solico provided structural verification and laminate details for all the carbon parts, including the telescopic tubes, the top and bottom members of the supporting structure, and the side tubes, while Structor worked with Solico to coordinate design details for the frame components and the screen membrane.

A preinstallation test last spring was completed successfully with the composite structure raised and the textile membrane tensioned to a perfect wrinkle-free projection screen by one person in less than four minutes. At press time the screen components had undergone final finishing with the complete assembly to be installed in the subsequent months.