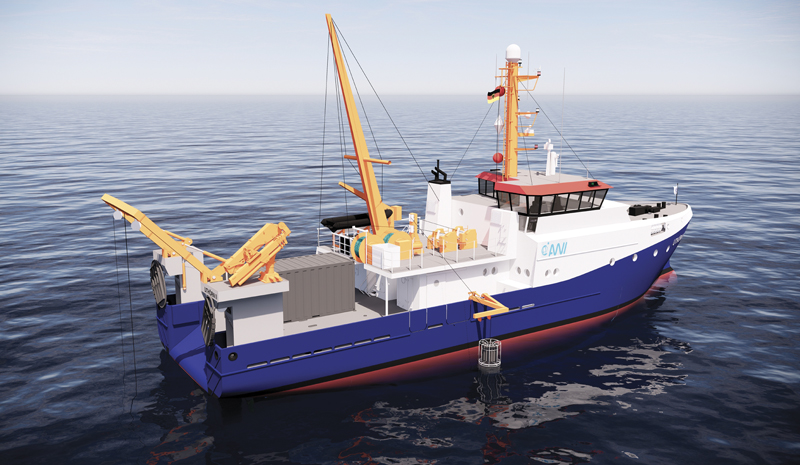 The new ocean research cutter Uthörn II that will run on green methanol and electric power is being built at the German Fassmer yard for the Alfred Wegener Institute, Helmholtz Centre for Polar and Marine Research.

A new ocean research vessel will run on “green” methanol (meaning CO2-neutral), replacing the 30m (98.4‘) research cutter Uthörn, launched in 1982. The keel for the new 35m (114.8‘) vessel of the same name was recently laid at the Fassmer shipyard in Berne, Lower Saxony, Germany. To be operated by the Alfred Wegener Institute, Helmholtz Centre for Polar and Marine Research (AWI), she is scheduled to go into service in October 2022. Built with 14.45 million euros ($17.23 million) financial support from the Federal Ministry of Education and Research, the vessel will carry a five-person crew and four researchers for as many as five days at sea, covering up to 1,200 nautical miles. For day cruises, the Uthörn accommodates up to 25 students and instructors. The new research cutter will be equipped with dry and wet labs, two derrick booms for handling nets and water samplers, a multifrequency fish echo sounder for finding and identifying schools of fish, and an antiroll (Frahm) tank to smooth motion in cross seas. The ship will also have an EM2040 multibeam echo sounder (MBES) from Kongsberg, an SES-2000 sediment profiling sonar (SPS) from Innomar, and an acoustic Doppler current profiler (ADCP) from Teledyne Marine (300 kHz and 600 kHz) with a depth range from 0.6m to 150m. (2′ to 492‘). 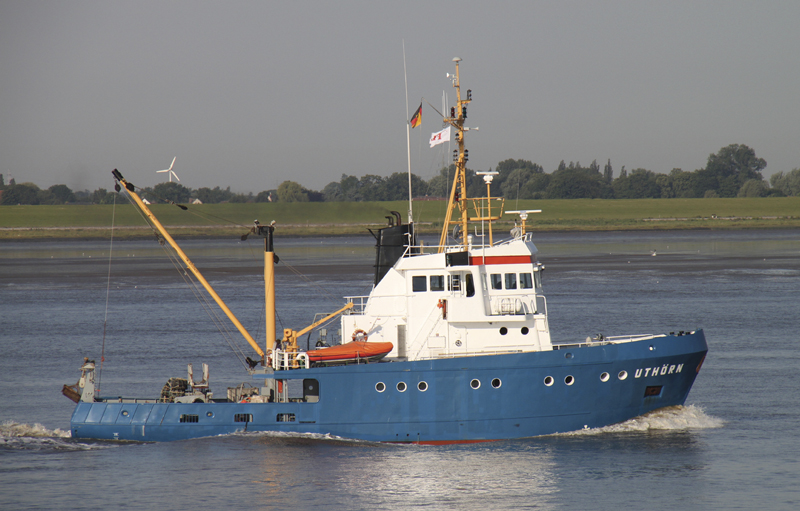 The original diesel-powered Uthörn has been in service since 1982 and took marine science students to the North Sea.

Of even greater interest, the propulsion system uses “an environmentally friendly and especially low-emission methanol-fueled drive system,” a first for seagoing vessels in Germany. Like hydrogen, the manufacture of methanol must use renewable energy to justify the claim of CO2 neutrality and environmental benefits. “In addition, methanol dissolves well in water; bacteria break it down almost immediately, which means that, in the event of an accident, it doesn’t pose any major threat to the environment,” said AWI Director Antje Boetius. “When methyl alcohol is burned, substantially fewer soot particles are released into the air than with gasoline, diesel, or heavy fuel oil,” a press release quoted logistical coordinator Marius Hirsekorn and scientific coordinator Dr. Michael Klages. However, because methanol has only half the energy density of diesel, the new vessel will need larger fuel tanks. 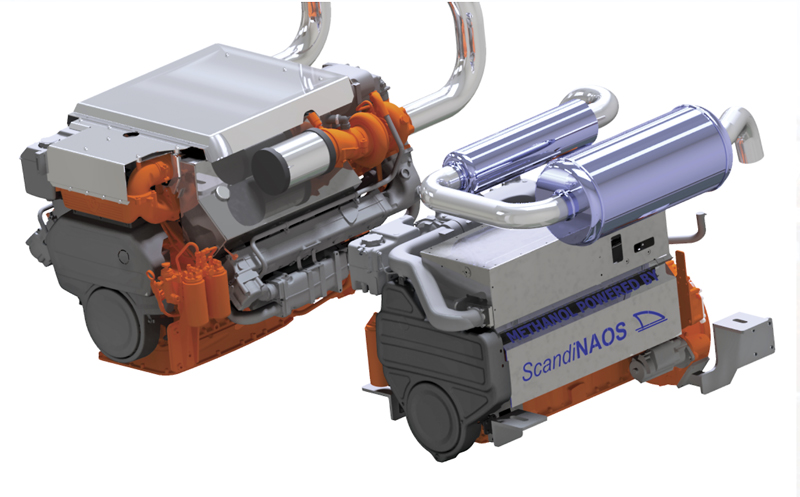 Before (left) and after: ScandiNAOS converted Scania 300-kW intercooled and turbocharged diesels to run on methanol and serve as generators.

In maritime shipping, methanol remains a comparatively untried fuel, used in test projects such as a pilot boat in Sweden with a diesel motor refitted for methanol. The new Uthörn will be equipped with two generators that in turn power the two water-cooled compact electric 200-kW AC permanent-magnet propulsion motors operating at 400V with frequency converters and variable-pitch five-blade propellers. The alternators are Leroy Somer LSAM 47.2 M7 C 6/4. The methanol-fueled 300-kW-generator motors are custom developed by ScandiNAOS in Gothenburg, Sweden, based on 4-stroke, 8-cylinder turbocharged Scania ship engines with intercooler and direct fuel injection. According to the tech specs provided by AWI, they are also compliant with IMO Tier III (MARPOL Annex VI) emission standards without exhaust after-treatment. That leaves the question of sourcing carbon neutrally produced methanol. AWI says it is signing a contract with Uniper, a purveyor of “green” methanol, and hopes to benefit from a research center for sustainably produced hydrogen in Bremerhaven, where the ship will be stationed during weekends, while its operating base will be on the island of Helgoland.

Producing green methanol is a multistep process. First, Uniper plans to make “green” hydrogen by using electrolysis with renewable energy, i.e., an 8-MW wind turbine. In a subsequent step, this climate-neutral hydrogen and CO2 from a nearby sewage treatment plant could be used to synthesize green methanol; during combustion it would release only the amount of CO2 that was bound during its production. Starting in October 2022 Uniper is to supply the Uthörn with 180 tons of bio methanol annually.

If successful, Bremerhaven could become one of the first harbors in the world to offer sustainably produced hydrogen and methanol fuels for the shipping industry. Therefore, the new Uthörn isn’t just Germany’s first seagoing vessel to use methanol for propulsion but also a test case to see if these solutions could help maritime shipping reduce its considerable carbon footprint: it currently emits approximately a billion tons of CO2 annually (about 2.5% of global greenhouse gases), not to mention nitrogen oxide, sulfur, and other harmful gases.