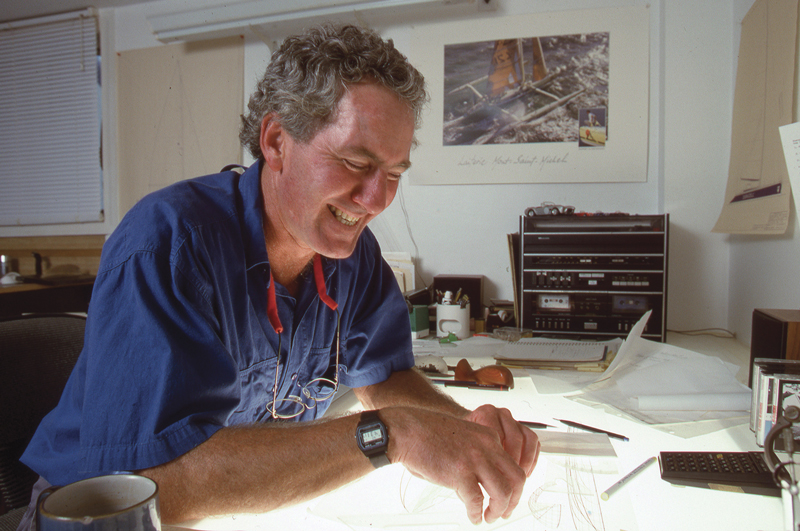 With scant formal training in yachtdesign, Rodger Martin established himself as a formidable practitioner, first learning on the job at the Derecktor yard and later working at Pedrick Yacht Design, before striking out on his own in 1984.

Yacht designer John Rodger Martin died on May 14, 2021, and is survived by Patty, his wife and sailing and business partner.

I met Rodger and Patty in the small town of Annapolis Royal, Nova Scotia, a few years ago. They had a cabin a few minutes from town in one direction, and we live in a village a few minutes the other. It was a pleasant surprise to find out that they spent summers here, as I was a fan of his designs from the beginning and don’t get to “talk boat design” in person with many people.

You can trace the refinement of Rodger’s designs by his ability to remove complexity, especially after hiring Ross Weene, a specialist in structural analysis, who has a great eye for design and eventually became partner in Rodger’s firm, Rodger Martin Design.

Martin’s boats sail beautifully, do well in races, and function well as shallow-draft and trailerable cruisers, so how did he learn to design them? Mostly on the job, it turns out. He was born far from the ocean, in Johannesburg, South Africa, on March 4, 1948, though his father introduced him and his twin brothers to sailing as young boys in Durban. One day, while out with Rodger, his father “jumped off the boat,” as Patty put it, leaving the boy to figure out how to operate a sailboat on his own. After this trial, he and his friends would explore the area around Durban, just having fun sailing. And soon, he started sketching boats, too. 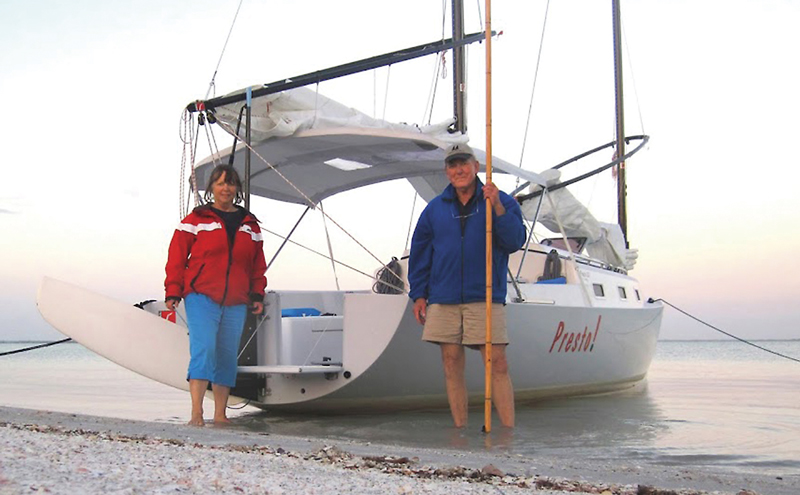 The 30′ Sharpie Presto! with wishbone booms on a freestanding ketch rig served Martin and his wife, Patty, as a cruising platform to explore the shallow waters in the Bahamas and in Florida.

After high school, Rodger worked in a mining assay office, collecting soil samples in Botswana, then as a photographer for South African movies, but he also kept sailing. On a Swan 43, which he joined in England for Cowes Week, he continued to St. Vincent in the West Indies. He left that boat and met Patty, and together they crewed on a 90‘ (27.4m) ketch out of St. Lucia—with Patty in the galley and Rodger on deck.

They eventually made their way to Florida, and Rodger started the Westlawn School of Yacht Design correspondence course. “I don’t think I actually even finished the first section (of eight lessons) of the course,” he said, “as I started to work as a laborer at Derecktor Shipyards while in a three-year apprenticeship there, then eventually was hired in their design office.” He was thrown into the deep end after Don O’Keefe, the naval architect who hired him, retired.

Then Bob Derecktor walked into the office and told Rodger he and the two others in the office had an 88‘ (26.8m) motor­yacht to design. Like the young boy who had to figure out how to operate a sailboat alone, he now had to learn to communicate with builders, engineer and draw parts, and make the boat work properly. Fortunately, the head builder, a fellow by the name of Eduardo, who spoke broken English, was very experienced and helpful. “If he saw something not quite right, he used to tell Rodger that ‘boss no like’ so he could change it. He learned so much watching them build aluminum boats,” Patty remembered.

In 1980 Rodger and Patty went cruising to the San Blas Islands and the Western Caribbean on a Tripp-designed DeVries-Lentzsch 29. On this voyage they learned that a heavy, deep sloop with long overhangs and a long boom was not suitable for open-water sailing in ocean swells and tradewinds. Next, Rodger joined Pedrick Yacht Design (PYD) in Newport, Rhode Island, working with chief designer Jeremy McGeary. 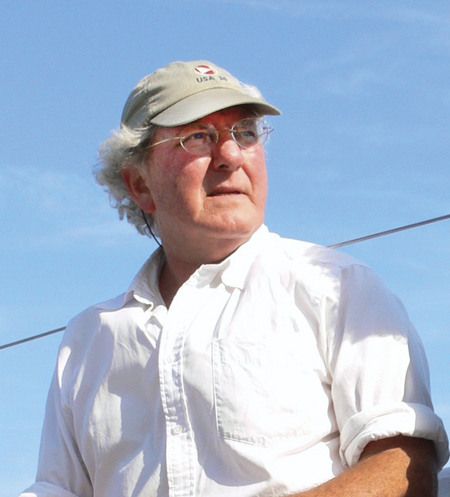 While Martin focused on racing yachts early on, his own sailing experience also informed sensible cruising boats later in his work.

At PYD, the approach was engineering-based, with access to tank-testing and increasingly helpful computer-aided design and analysis tools applied to racing and production boats. When McGeary left for Camper & Nicholson, Rodger took his job and subsequently met solo sailor Mike Plant, who would hire him to design three round-the-world racing boats, which led to triumph but ended in tragedy.

Airco Distributor, Duracell, and Coyote (see Professional BoatBuilder No. 113, page 82) defined the middle of Rodger’s career. Perhaps the most remarkable feat of this partnership with Plant was taking on the mighty French in the ’86–’87 BOC round-the-world race and winning the 50-foot class. An American skipper who built his own boat that was designed by a (now) American designer and his associates, with barely enough funds to get around the world, beating the fully sponsored, hi-tech racing machines and professional sailors out of France? It was a fantasy, but they did it. (The film Coyote: The Mike Plant Story, is available on various streaming platforms online.)

In the ’89–’90 singlehanded nonstop Vendée Globe, they tried the formula again with Duracell, a 60‘ (18.3m) improved version of Airco Distributor, which unfortunately dragged its anchor off Campbell Island, New Zealand, during a stop for repairs. Four meteorologists towed Duracell to safety unasked, but outside assistance is not allowed, so Plant, who reported it, was disqualified. Nonetheless, he continued the race and was welcomed by a large and appreciative crowd when he crossed the finish line at Les Sables d’Olonne, France.

However, Duracell wasn’t as fast as the French racers, so the next boat, Coyote, was more extreme. Sadly, proper sea trials weren’t completed due to time constraints, and the keel wasn’t checked thoroughly after a grounding. The bulb fell off in a tropical storm during Plant’s qualification sail across the North Atlantic prior to the ’92–’93 Vendée Globe, and the vessel was found upside-down and empty weeks after it was reported missing. 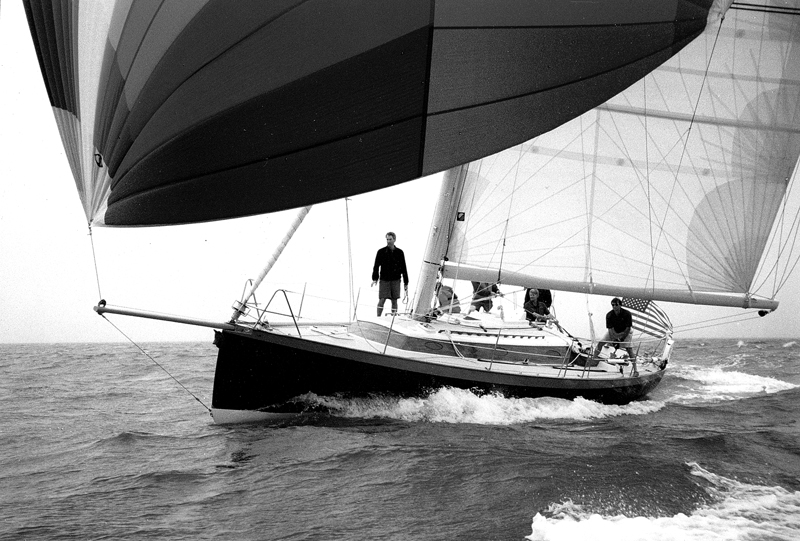 The loss of a friend was hard on Rodger, and he concentrated on cruising designs for the rest of his career, but all his boats share signature traits like light weight, great construction and design detailing, subtle sheers and cabins, simple but “appropriate-tech” rigs, and, usually, a full-length topside flare ending in a wide and gently curved turn of the bilge at the transom. With sleek foils, the underbodies are always slippery, graceful, and fast. One of Martin’s and Weene’s most innovative custom racer-cruisers is the 40‘ (12.19m) freestanding-sloop Gray Wolf, while production designs include the VX One, VX Evo, Johnson 18, Outward Bound 30, Quest 30 and 33, and the Aerodyne 38, 43, and 47.

Rodger became a fan of the Commodore Ralph Munroe sharpie cruiser concept and in 2009 designed a shallow-draft cat-ketch, the Presto 30, which he and Patty cruised in the Bahamas and Florida during winters. The freestanding rig was designed by a friend, the boat’s co-owner and the co-founder of Hall Spars, Phil Garland. The rig, like the boat, is a celebration of functional simplicity and performance.

Rodger said he left life feeling fulfilled, and I can imagine he sailed himself over the bar in comfort, at speed, and in style on a shallow-draft cruiser. He was a great source of design experience and industry insight and a genuinely nice man. In his wake he leaves goodwill and a treasury of excellent performance-cruiser and racing sailboat designs.