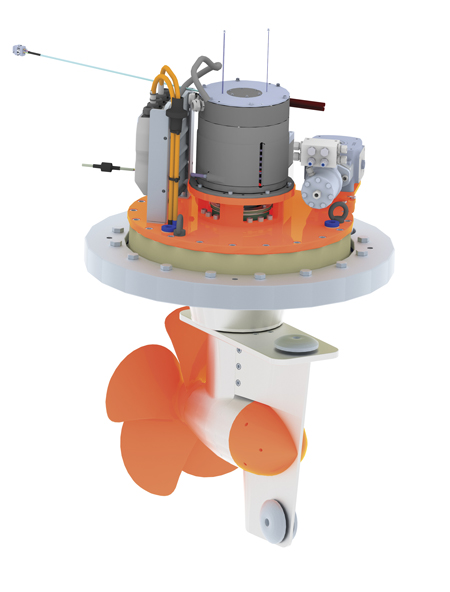 Based on Poseidon’s PA 75 Azimuth drive and now offered by Torqeedo, this fully rotating ferry thruster has 50 kW of continuous power, a forward-facing five-blade prop, and spiral bevel gears to reduce noise.

Torqeedo, now part of Deutz AG, the world’s oldest engine company, is expanding its line of electric-propulsion systems to commercial passenger ferries. Earlier this year, the company announced a new electric thruster for its Deep Blue System with continuous power of 50 kW (67 hp) and peak power of 65 kW (87 hp). The thruster features an electro­hydraulic steering system by FS-Schiffstechnik in Duisburg, Germany, and can rotate 360° to increase vessel maneuverability.

The unit, developed in cooperation with Dutch manufacturer Poseidon Propulsion, is based on Poseidon’s Type PA75 Azimuth model. Noteworthy features include a forward-facing five-blade aluminum propeller (pitch is adjusted depending on vessel, power, and rpm needs), angled Klingelnberg spiral bevel gears that help reduce noise levels, 0.25 kN input torque, and a weight of 425 kg/937 lbs (without propulsion or steering motor) thanks to the use of seawater-resistant anodized high-tensile aluminum.

“Typically, with electric propulsion the output power is easily definable and depends on motor choice, available energy, and software settings of the drive’s frequency,” said Poseidon’s sales engineer, Marwin Fernhout. “Mechanically we have to watch the torque on the gear wheels. For applications that run all day, every day, like small ferries, the choice for a small oversize is easily made.”

Torqeedo which thus far mostly has been serving the recreational market (see our report about a sleek runabout with a Torqeedo Deep Blue system) forecasts service intervals of up to 25,000 hours (the “optimized efficiency of a pulling propeller”), so the new thruster “will further lower the total cost of ownership for climate-friendly ferries and water taxis.” Based on the marinized BMW i3 batteries of the Deep Blue System, battery capacities range from 80 kWh to 1 MWh and meet IEC 62619 and IEC 62620 requirements for use in inland vessels according the European Standard of Technical Requirements for Inland Navigation (ES-TRIN). Alternatively, Torqeedo offers a DNV-GL type-approved battery available for offshore applications. 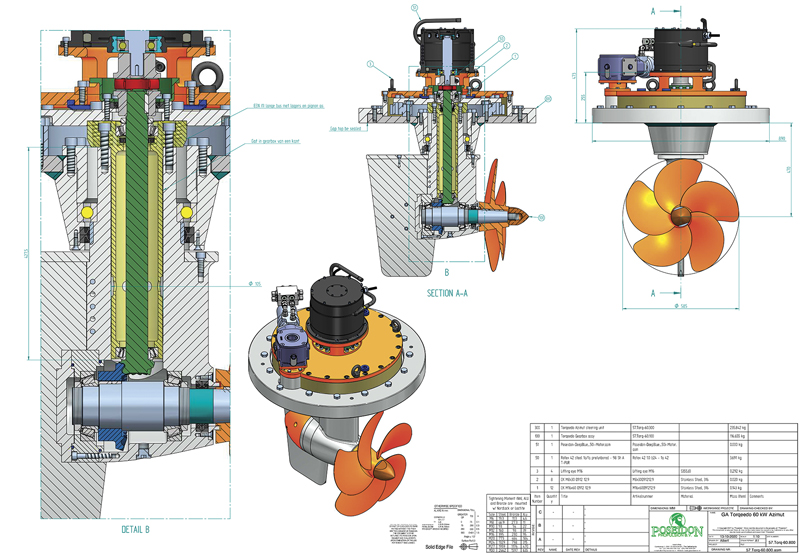 Detailed drawings of the unit, made of high-tensile anodized aluminum, show Torqeedo’s Deep Blue 50i motor (51) and gearbox assembly (100), the respective weights, and dimensions.

“The technology is ready,” stated Axel Büchling, Torqeedo’s project sales manager. “Up to 200 kW [268 hp] propulsive power is enough to operate most inland passenger vessels. The modular system design allows the operator to use the same parts and components in different vessels, and all components can be monitored and serviced remotely.” Using either two or four of these thrusters, depending on application and vessel size, Torqeedo also claims “unbeatable maneuverability…a critical advantage for inland and urban waterways.”

Converting existing ferries and water taxis to electric power or constructing new vessels with solar-electric-propulsion systems is attractive, because the vessels tap into the systemic advantages of electric drivetrains such as no emissions, quiet operation, and less mechanical maintenance, while avoiding the limits on range or speed that heavily depend on battery capacity. On protected waters, speeds are often limited by no-wake zones, and operating schedules often permit overnight charging, thus eliminating the need for costly infrastructure such as high-speed charging stations, which are still the Achilles’ heel for electric cars, especially on longer road trips across state or national borders.

The first project for the Deep Blue thruster is a solar-electric passenger ferry that will connect the northeast German towns of Kamp on the mainland and Kanin on the island of Usedom—a run of less than half a nautical mile. The sun-powered 14.65m (48‘) ferry has a capacity of 20 passengers and 15 bicycles at a cruising speed of 5 knots and a maximum speed of 7.5 knots. The new ferry, which replaces a conventional vessel that served this route until recently, is scheduled to start operation in August 2021. At press time, the ferry was still under construction at Ampereship, a subsidiary of the Ostseestaal shipyard. Ampereship’s specialty, as the name suggests, is the construction of solar-electric passenger ferries. 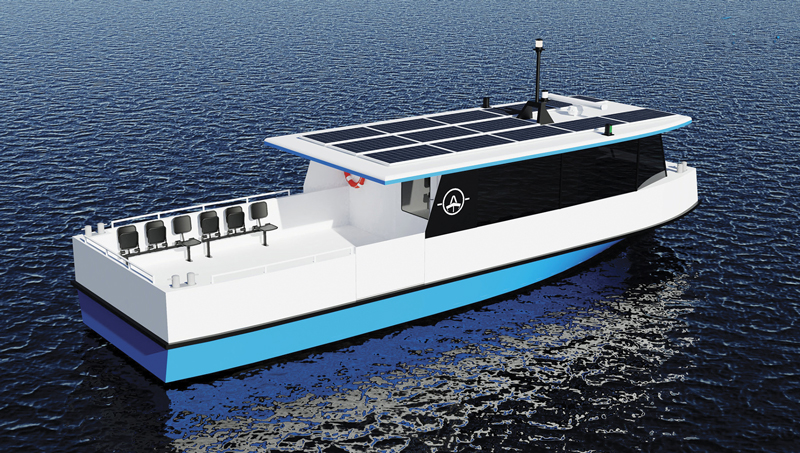 This solar-electric ferry is the first platform for the Deep Blue thruster. With a projected top speed of 7.5 knots, the vessel will be able to shuttle 20 passengers and 15 bicycles between the German island Usedom, near the Polish border, and the mainland.

Reporting on the project, local news media pointed out the potential economic benefits of electric vessels for Germany’s border region with Poland, which also is home to HanseYachts AG, one of the world’s largest production builders of recreational yachts. While Hanse’s factories in Greifswald, Germany, and Goleniów, Poland, are scrambling to keep up with demand, commercial shipbuilders in the area have seen their fortunes wax and wane. They are pinning renewed hopes on converting combustion-powered vessels to electric propulsion and on building new state-of-the-art solar-electric ferries, such as the one that will shuttle passengers between Kamp and the island of Usedom.

“This year we succeeded for the first time in acquiring orders for the construction of fully electric ships that will [serve] Mecklenburg-Western Pomerania,” the regional paper Nordkurier quoted Thomas Kühmstedt, the managing director of the Ostseestaal yard. In addition to the Torqeedo-powered Usedom ferry, the company had another new solar-electric passenger ferry under construction for the town of Rostock.