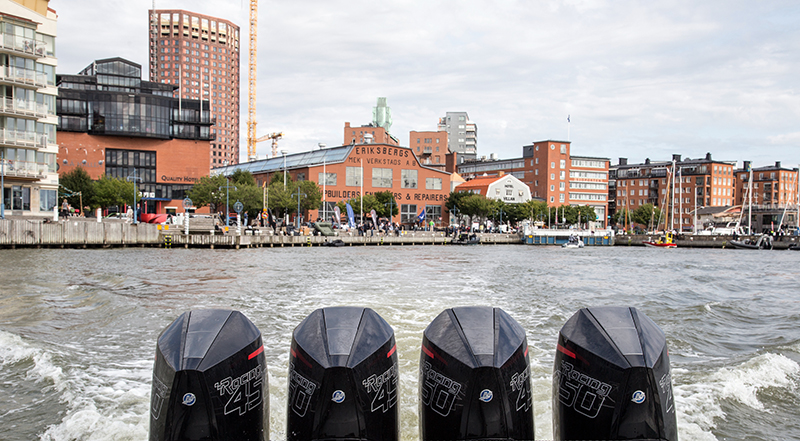 Like many activities during COVID, the biannual High-Speed Boat Operations Forum—organized by Ullman Dynamics, a leading manufacturer of suspension seats, and sponsored by Volvo Penta and RINA (Royal Institute of Naval Architects)—was postponed from 2020 to the end of August 2021. Despite attendance down by 25%, the craft on exhibit and the quality of presentations in the conference room were interesting and of the usual high standard. As a networking platform for those requiring high-speed boats for professional use, it is difficult to imagine a better opportunity to meet and discuss the various requirements for specific operations at sea.

What follows are some of my observations from test drives of the boats on hand and my experience of their on-the-water performance.

The stepped-hull craft made by the Swedish Petestep company was a popular talking point. With its heavily raked windscreen, low-profile cabin, shiny stainless-steel grabrails, and nonskid decking, this beautifully finished 9m (29.5’) boat looked slightly out of place amongst the black/gray liveried craft. With its stylish looks and small but practical cabin, it resembled a fast sports cruiser, with one of the finest handling stepped hulls I have tested. Fitted with a 370-hp (278-kW) V8 MerCruiser diesel sterndrive, the boat topped out at 54 knots with four people aboard and could be put into a tight turn at full speed without the slightest slip or imbalance. When jumping the steep wake of a passing ship, she just cut through it like a hot knife through butter. Despite the missing grab handle around the top of the windscreen and a slightly offset steering wheel, the Fugu 29 impressed with top quality and excellent handling. 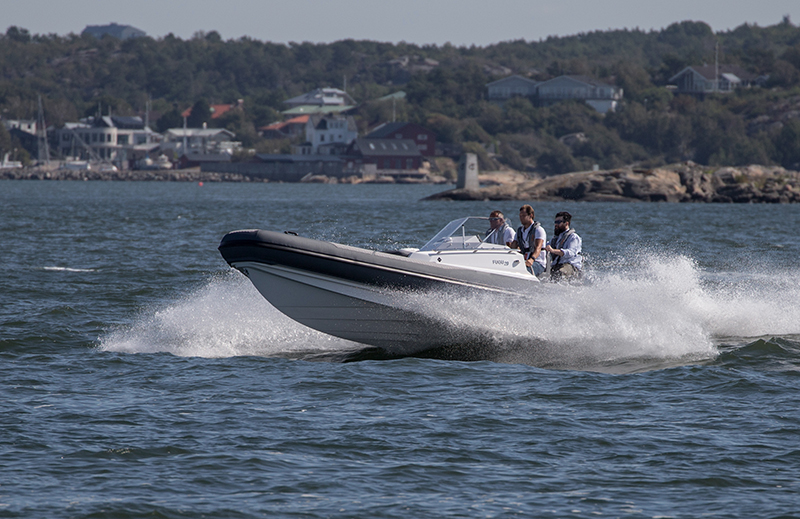 With an identical hull, the main difference on the Marell Triple was the fully enclosed wheelhouse, a four-berth cabin, flat aft section, and the engines—three of the latest Volvo D6 440-hp diesels coupled to DPI automatic sterndrives with hydraulic gearboxes operated by a joystick. This appeared a more practical craft despite being 1.5 t (3,300 lbs) heavier yet only 8 knots slower at full speed but, importantly, approximately a third more economical than the outboard version. The joystick gave superb slow-speed control, and the electric vessel control has the ability to stay exactly on a stationary, fixed GPS position at the push of a button, a useful capacity for rescue operations, etc. 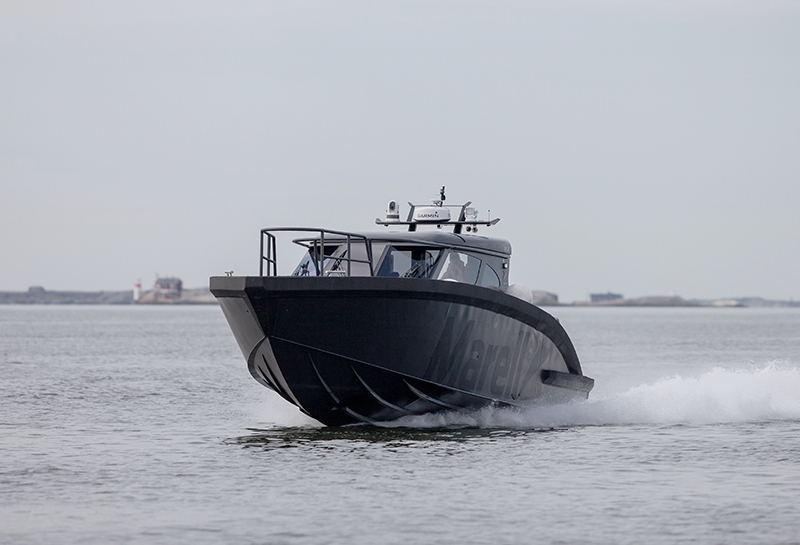 These tough-looking Dutch-built 10.5m (34.5’) aluminum RIBs are aimed squarely at the professional operators’ market—police, coast guard, and customs. With a wide, protecting console mounted starboard aft and four Ullman Biscaya seats, the crew are in the most comfortable position for rough sea conditions while keeping an eye on the four additional crew members seated directly in front of the console. Powered by a pair of the same Volvo 440s as the Marell Triple, this 6-ton (13,227-lb) 50-knot craft with a cruising range of 360 nautical miles, felt solid, purposeful, and planted during testing, and displayed excellent handling characteristics across the entire speed range. The uncluttered foredeck has the option of a large removable watertight container to carry special equipment. The raised bow section, which also has a large locker, doubles as a boarding platform for the crew to transfer between vessels. In addition to a solid foam fender protecting the entire craft, a strong aluminum aft platform guards the sterndrives against collision. 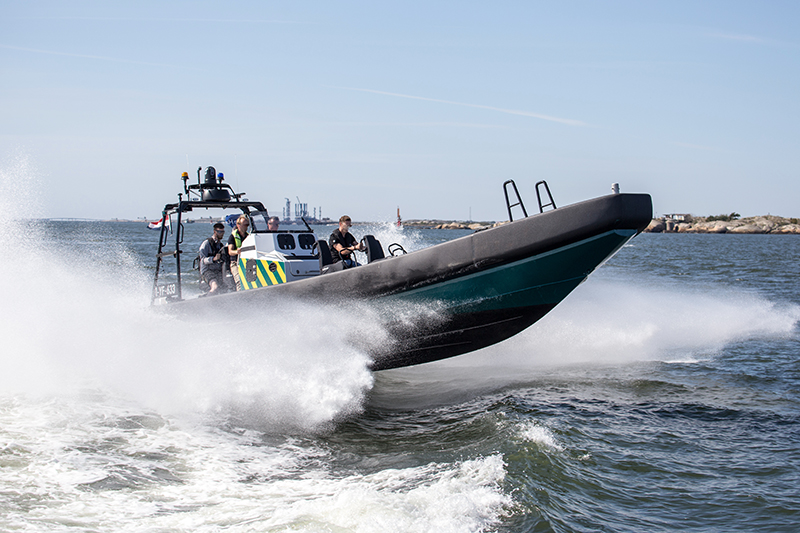 This boat is informed by the ideas and experience of respected professional boat-handling instructor Andreas Isaksson from his years of training rescue, coast guard, and military personnel in high-speed boat handling/navigation. The Adam-Younger-influenced deep-V triple-stepped hull powered by twin 400-hp (300-kW) Mercury outboards combines high performance, efficiency, a level ride, and flawless handling. Built entirely from carbon fiber, this almost 12m-long (39’4”) 60-knot craft tips the scale at 3,500 kg (7,700 lbs) and fits into a high cube 40’/12.19m container for easy transport. Sensible ergonomics, a clever layout, comfortable Ullman suspension seats for driver, navigator, and passengers guarantee crew comfort. Flush-mounted aircraft-style cargo tracks built into the deck offer multiple attachment points for seats or securing cargo. Of special note are the extended carbon fiber aft tube carriers that double as engine protection; the 1,400-l (370-gal) “explosafe”-type removable foam-filled fuel tanks, which are bullet resistant and prevent fuel surge imbalance issues; and the sophisticated navigation/communication systems. A theoretical range of 875 nautical miles at 25 knots makes this one of the most efficient gasoline-powered 12m craft I have tested. Alas, there are no plans to put it into production. 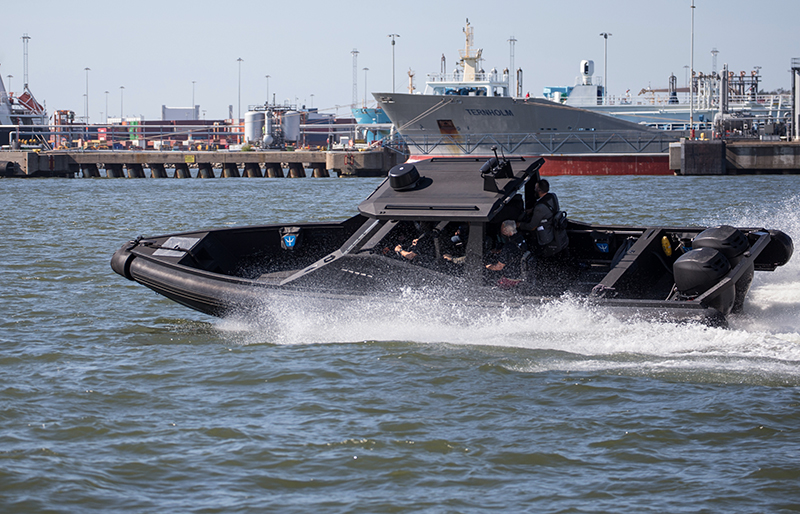 With a reputation for tough, no-nonsense craft, the French Sillinger boats are popular with commercial and military operators. One of the most intriguing craft on display was the company’s covert-operations submersible 4.7m (15.4’) inflatable boat. This outboard-powered, tiller-steered all-inflatable boat is designed to carry Special Forces divers deployed from a mother vessel offshore; the boat runs in planing mode until the divers are close enough to swim to the destination. To avoid detection, they can deflate the craft through a special tube venting system and leave it in shallow water for later retrieval. The engine and fuel system are 100% waterproof—much like the Raider outboards used by the U.S. military (see “Military Grade,” PBB No. 179, page 16)—and remain attached to the craft while it rests on the seabed. 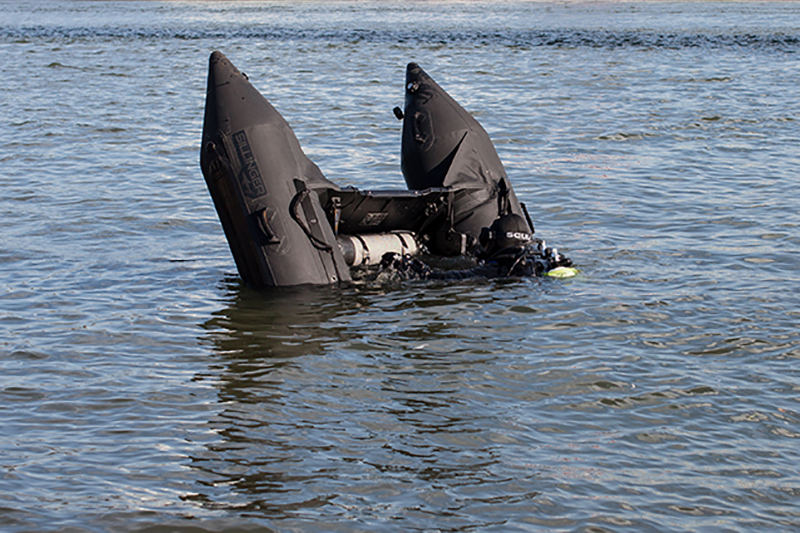 Also on display was a unique hydrofoil version of the Sillinger 765 (see also “Foil Shop,” PBB No. 192, page 30), which would be interesting to test after it is fully developed.

This strange floating electric waterjet-powered vehicle with a low radar image is constructed from heavy-duty Hypalon utilizing drop stitch technology. It is a super-strong, beamy, battery-powered floating raft to carry personnel or equipment at low planing speeds in special circumstances. Like the Sillinger 470 it is fully submersible and intended mainly for covert operations, although it could be used for other applications such as a self-propelled work platform. 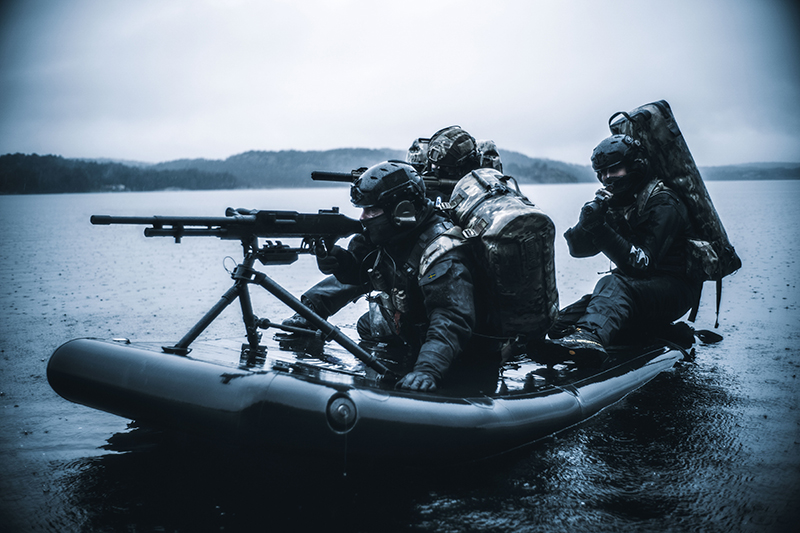 With close to 1,000 hp, courtesy of a pair of tuned Mercury 450R V8 outboards on the back of the unique 8.5m (28’) stepped hull, this craft just begs to be driven at ludicrously fast speeds and with four crew aboard. We recorded just under 100 knots on the GPS. The larger-than-life owner/designer of Raven RIB, Jan Jorgensen, is the official world speed record holder at close to 120 mph with 700-hp (525-kW) engines, so with the latest more powerful engines, expect to see his own record smashed before too long. 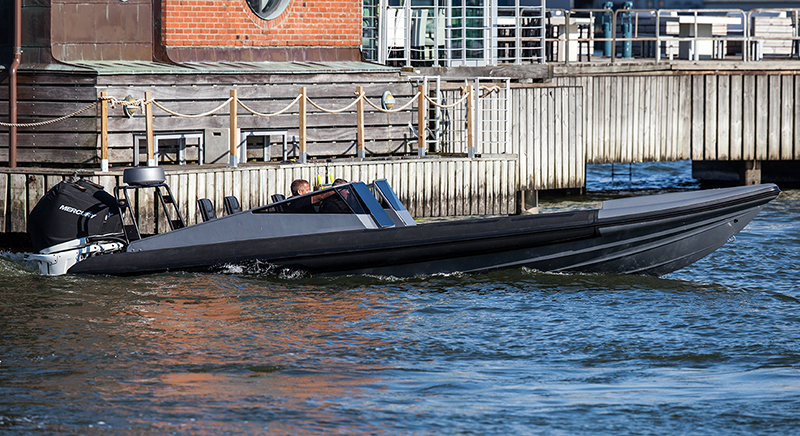