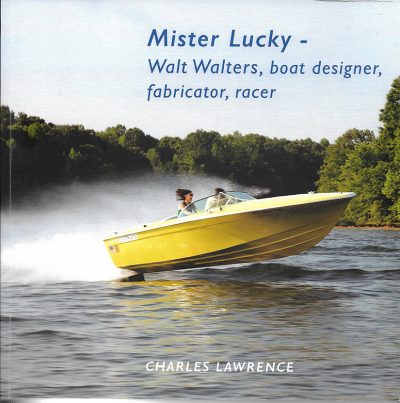 Charles Lawrence self-published book about the work and life of US designer Walt Walters.

You know you’re getting old when today’s generation of hot-shot designers tell you they’ve never heard of someone you consider an American hall of famer. Case in point: I was so disappointed when a prominent designer of stylish powerboats said he’d never heard of Jack Hargrave that I mailed him a copy of Marilyn Mower’s exquisite retrospective coffee-table book: American Classic—The Yachts and Ships of Jack Hargrave. More recently, I added Walt Walters to the list.

Fortuitously, British historian Charles Lawrence has undertaken the formidable challenge of cataloging Walters’s numerous designs and presenting them in a self-published softcover book that aims to keep Walters’s body of work alive and relevant.

Born Waltman Mayo Walters in 1926, he grew up in Minnesota in the family that founded the renowned Mayo Clinic. His grandfather had a paddle wheeler on the Mississippi River, which inspired Walters to build a few small boats of his own that included an 8’ (2.4m) Lawley pram and a canoe. He joined the Army Air Corps and learned to fly, later studying aeronautical engineering at Rennselaer Polytechnic Institute in Troy, New York. He married, had two children, and after several uninspiring jobs that included car sales, he took a flyer on a career in boats, prompting a risky move to Florida in 1956. Luckily, as he remarked often about his career, he landed at Scottie Craft, working for Russell Specht and earning $1.10 an hour as a draftsman. Here he was introduced to the processes of fiberglass boat production, which he built upon next at Squall King, American Marc with Carl Moesly (see “The Amazing Mister Moesly,” PBB No. 91), and then Bertram Yachts, at the instigation of racer Sam Griffith, serving as chief of fiberglass design and engineering. Also on staff was Jim Wynne, with whom he’d later form a successful partnership designing and campaigning raceboats for the popular offshore racing circuit on both coasts of the U.S. and in Europe.

From Bertram to Cigarettes

Near the end of 1962 Walters left Bertram to work as an independent designer, and soon thereafter in collaboration with Wynne. This resulted in the Wyn-Mill family of small raceboats with the Aquamatic outdrive that Wynne aggressively promoted for Volvo. Several iterations of the 17-footer (5.2m) with deep-V hulls and signature tumblehome performed successfully at the Paris Six Hours and other events during the mid-1960s.

When Don Aronow arrived on the Miami scene, retired from New Jersey real estate development, he commissioned Walters to design the Formula 233, which remained in production for some 20 years (1963–1984), and was one of the most copied designs of all time. Among the many photos Lawrence has collected for the book is one of the first Formula 233s, called The Cigarette, with Michael Aronow and The Beatles’ drummer, Ringo Starr, aboard.

Among Walters’s favorite designs is the iconic Donzi 16, variously marketed as the Ski Sporter and Sweet 16. It measured 16’7” (5.0m) long with a 6’11” (2.1m) beam, powered by a 110-hp (82.5-kW) Volvo engine coupled to an Aquamatic outboard leg. An evolution of Walters’s Wyn-Mill designs, the 16’s tumblehome was dropped in favor of what Lawrence calls a flatter, more slab-like “European”-style topsides.

Like many raceboat designers of the day, Walters also crewed on his boats. The 32’ (9.8m) aluminum Maritime, with Wynne, Walters, and Bill McKeon on board, won several races in 1965, including the Viareggio–Bastia. She was sold and successfully raced as Big Board Jumper by Bill Wishnick and Alan Brown. (The names of people in this book are a who’s who of early powerboat racing personalities; Professional BoatBuilder was able to showcase a few of the surviving ones at the 2019 IBEX show in Tampa, Florida.) Perhaps Walters’s pinnacle achievement was the deep-V wooden 29’ (8.8m) Ghost Rider, which won four races in 1966, including the Miami–Nassau, Cowes–Torquay–Cowes, Hurricane Classic, and Miami–Key West.

Over the course of his career Walters designed many dozens of boats for many builders ranging beyond the U.S. to Denmark and Uruguay, which included powerboats for Aquasport, Botved, Chris-Craft, Starcraft, Fino, Luhrs, and even a few sailboats for his friend Bill Soverell. In 1967 he bought an Avenger 39 bare hull of his design and finished it himself as a raised pilothouse motor cruiser for family cruising.

In 2011, I was fortunate to spend a day with Walters and his wife, Vern, at their winter home in Florida. He was looking forward to returning to their other home in Minnesota so he could resume flying, which despite all his years in boating, remained a lifelong passion. I found him modest and forthright about his career and relationships, emphasizing that despite popular opinion, Jim Wynne was not a designer. Later he sent me a box of old papers, which I passed on to patron Paul Herzan, who passed them on to author Charles Lawrence. My profile of Walters may be found in PBB No. 132. It ended with my asking if he regretted never finishing his college degree. “If I’d gotten a degree,” he answered, “I’d have had to work for a corporation. Not knowing what I was doing was a privilege—learning how to do things my own way.”

Ed. Note: Mr. Lucky is self-published by Lawrence in the U.K. It is a high-quality effort, though its lack of an editor is occasionally evident. Equally evident is how much work was expended collecting the many (rare?) photographs and drawings that are probably the greatest value of the book. Lawrence believes he has compiled a complete or nearly complete list of all Walters designs, and that, too, is of considerable value. Walters is deserving of both.