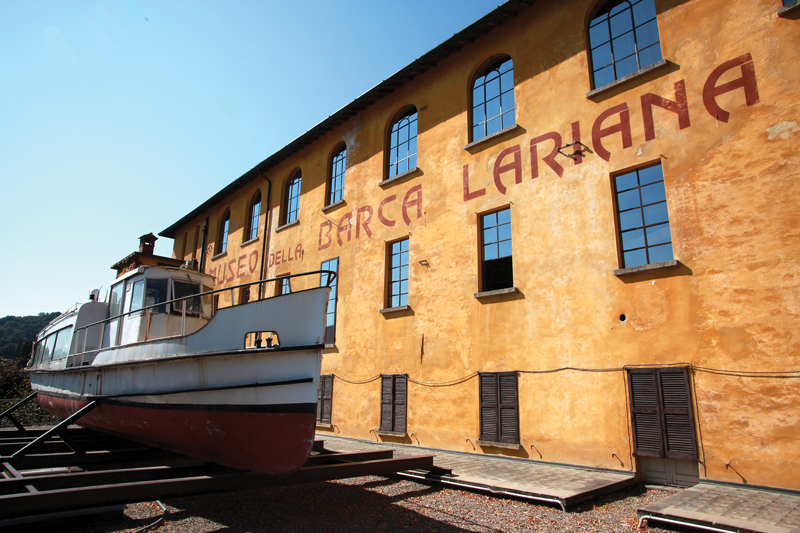 Since 1982, the Museo della Barca Lariana has sheltered hundreds of rare, classic boats in a former spinning mill on the northern end of Lake Como, Italy.

There are places in this world that seem to have been blessed by the gods, Italy’s Lake Como being one of them. With local roads resembling tortuous paths, boats were long the favored mode of transportation on this majestic lake. Many yards along its shores served residents’ needs for vessels. The proliferation of villas, where the rich and famous came to relax in the 19th century, furthered marine activities beyond fishing and transporting food and passengers by oar, sail, steam, and later the internal-combustion engine. Celebrated builders such as Abbate, Cranchi, and Timossi originated here, but not all of them survived the transformation that fiberglass boat production brought.

Enter GianAlberto Zanoletti, a courageous pioneer of classic-boat culture. He started saving hundreds of the region’s old boats in the late 1970s as small yards desperately fought for survival by switching to fiberglass, which was replacing wood as the preferred boatbuilding material. During those days, nobody wanted to keep the “old crap.” 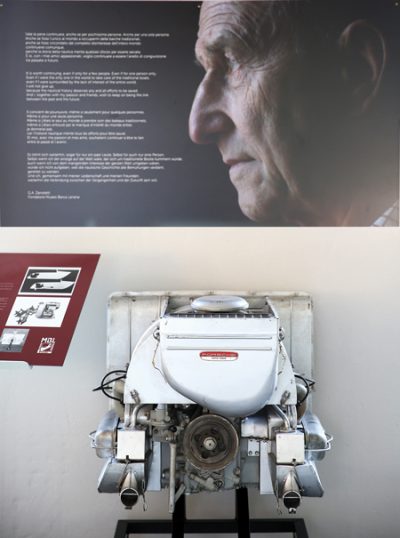 A photograph of founder GianAlberto Zanoletti and a rare air-cooled Porsche marine engine watch over the collection.

Zanoletti (1943–2019) was part of a generation accustomed to seizing opportunity when it presented itself. As a cultured gentleman, explorer, sportsman, diver, and underwater photographer, he traveled the world before dedicating himself to the preservation of his homeland’s nautical heritage. Living in Milan and on Lake Como and fascinated by the human relationship with nature, he also took the wheel of raceboats. In 1970 he set a world record in the Sport Outboard class SF (1000 cc) category on an Abbate hull powered by a Carniti engine.

Nothing about boats and those who designed and built them was foreign to him. Deciding to look after the legacy left on the shores of Lake Como, he began to build an impressive collection, first alone and then with like-minded friends. In 1976, with a handful of faithfuls, he founded the association that paved the way for the Museo della Barca Lariana, founded in 1982. This unique refuge for endangered classic boats was set up in an old silk-spinning mill with enough space to store hulls, motors, artifacts, memorabilia, and drawings. Featuring more than 400 boats, a permanent exhibit of classic Riva boats, and the oldest and best-preserved Venetian gondola, it is heralded as the largest small-boat museum in the world.

In 2014 Zanoletti explained his mission: “As in nature, the richness of the human species comes from the variety of everything around it. This applies to boats. If a typology of boats disappears with its history, humanity loses a part of itself and is impoverished.” 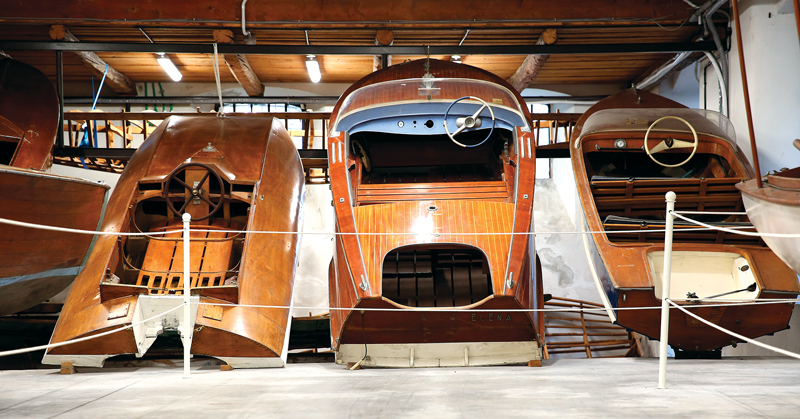 Displaying different drivetrains and hullforms, the eclectic exhibits are arranged to make the most of the tight space while capturing visitors’ imagination.

But fate struck when he suffered from a degenerative disease while his museum was closed to the public due to safety issues. At this point, his son Ferdinando took over, creating a foundation and launching a major renovation that led to the reopening in 2018 of a museum that was better and more fascinating than ever. Luckily, his father was there to witness this remarkable rebirth before he died a year later. This incredible institution, which transports visitors back in time, is dedicated to him.

Zanoletti wasn’t satisfied with merely sheltering a fragile nautical heritage. The creation of the club Associazione Scafi d’Epoca e Classici (ASDEC) in 1987 helped promote the use of historic boats and assists many enthusiasts, owners, and discoverers of “barn finds.” In commitment to their mission, the founding members also established strict criteria for the preservation of historic boats. 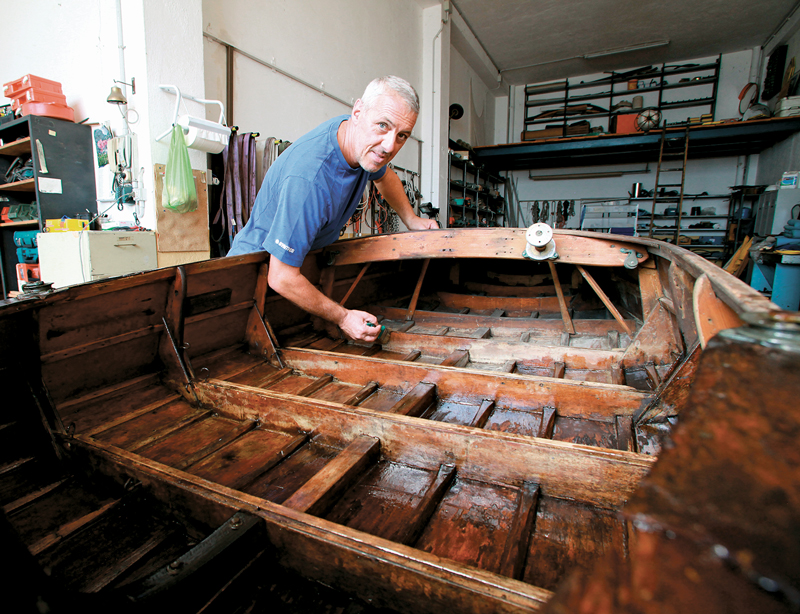 Flavio, a mechanic and carpenter, runs a workshop for restoring and maintaining the museum’s collections.

The club lists a panel of specialists and trains experts to advise and guide the owners with the restoration of their boats. With methods and standards comparable to those of major cultural institutions, ASDEC has thus created rules and guidelines for undertaking work on a historic and inherently fragile or unique vessel. Its Registro Storico Nautico certifies the boats that meet these criteria to validate their value and heritage, which is on display when they participate in the many classic boat gatherings in Italy and across Europe.

On Lake Como, boats still remain the best means to explore its shores. For owners of restored boats, rallies are one of the greatest rewards after years of toil to achieve the best possible results. But not all ancient boats can or should be restored. ASDEC is mindful of the potential damage that an improper restoration, even if minimal and respectful, can do to a rare boat still in its original condition. It can lead to the irreparable loss of its role as witness to an era and a certain know-how—a dilemma also shared in the world of classic automobiles. 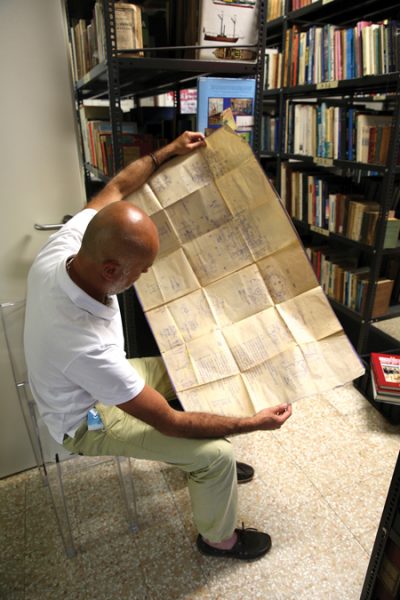 Curator and archivist Emanuele Seghetti peruses a plan in the museum’s archives, an invaluable technical resource in restoring some of the boats.

It is no coincidence that today ASDEC is a member of the Automobile Club Storico Italiano (ASI), an authority assuring the veracity and accuracy of restorations to be admitted to club gatherings. Since 1988, more than 80 meetings have been held by ASDEC, on Lake Como, and by the sea in places like Imperia, Venice, La Spezia, and Monaco, and even on the Seine in Paris in 2006, in cooperation with the French Cercle du Motonautisme Classique. Some gatherings also host sailboats, as did the very first ASDEC meeting on the coast of Liguria in 1988. Organized by the club, the first rally of motorboats, in July of 1991, was a dazzling affair in an exceptional setting of beauty and elegance at the Villa d’Este, for centuries a residence of the aristocracy and now a ritzy five-star resort in Cernobbio, on the southwestern end of Lake Como.

From year to year, the number of participants, the variety of boats, and the range of nationalities represented have grown so that the number of entrants had to be limited. The joy of gathering remains unchanged. Starting from the waterfront of the posh Villa d’Este, it has become a cherished ritual to run northward to Cape Bellagio—an ideal opportunity to admire the splendors of the surroundings and the Villa del Balbianello on the tip of a peninsula between the towns of Ossuccio and Lenno on the port side—while giving the boats a chance to stretch their legs at full throttle before returning to Cernobbio, near Como. But after passing Bellagio, it may also be tempting to keep heading north along the western shore to Pianello del Lario, the birthplace of the famous Museo della Barca Lariana, where it all began. 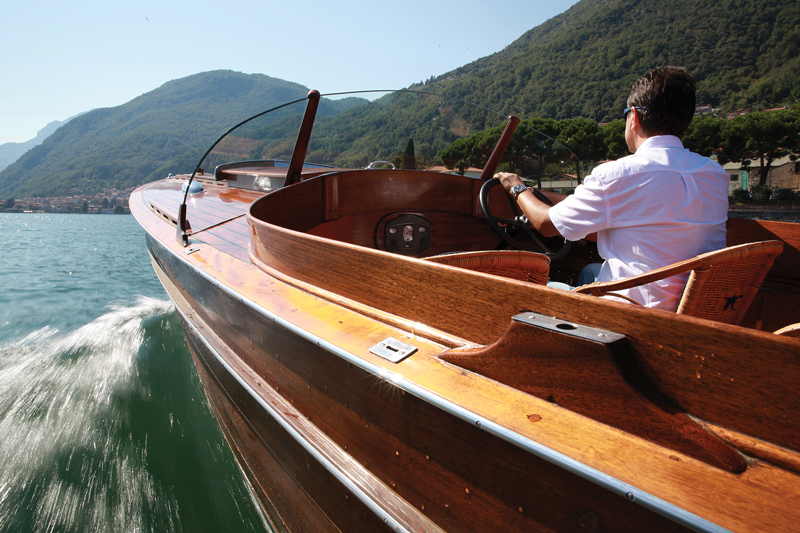 A classic-boat rendezvous from the Villa d’Este to the Villa del Balbianello and beyond is surrounded by spectacular Lake Como scenery.