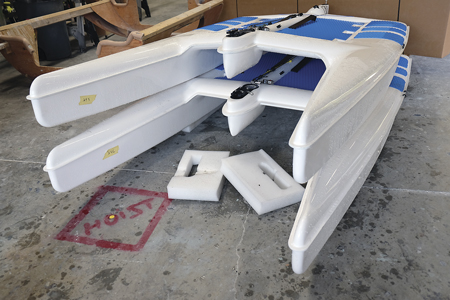 After the E.U. tariffs on U.S. boat imports were removed, a pair of UFO foiling boats is readied at Fulcrum Speedworks,for shipment .

Some good news about doing business with Europe made headlines in late October: The U.S. and the European Union reached an agreement on a trade dispute that had vexed U.S. boatbuilders for three years, promising to remove the E.U.’s 25% retaliatory tariff on boats made in the U.S. The long-awaited measure was expected to go into effect on January 1, 2022. Had no deal been struck, this tariff could have increased to 50% on December 1, 2021 (see our previous coverage of these Trade Tariffs)

In turn, the U.S. will replace existing tariffs on steel (24%) and aluminum (10%) from the E.U. under Section 232 with a tariff-rate quota (TRQ). The parties also agreed to cooperate in trade remedies and customs matters and in developing additional actions to address “non-market excess capacity.” Also, more-stringent emission standards aim to reduce the carbon footprint of steel and aluminum products and curb the entry of aggressively priced imports that do not meet those criteria. “This deal creates a framework through which the U.S. and E.U. agree to take carbon intensity into account in future negotiations,” noted Commerce Secretary Gina M. Raimondo. “The U.S. and the E.U. both produce steel and aluminum that is ‘cleaner’ than what is produced in much of the world. The lack of environmental standards in places like China is part of what drives down their costs, and it’s a major contributor to climate change. Today’s deal begins to address those challenges.”

“The deal the U.S. and the E.U. struck is all about how they are positioning themselves against China,” explained Clay Crabtree, the National Marine Manufacturers Association’s (NMMA) director of federal government relations. “Everything is pretty geopolitical, and there are also supply chain concerns when it comes to steel and aluminum.” Crabtree added that, while hugely important, the E.U. agreement should only be the beginning. “It was announced that negotiations are beginning with Japan and hopefully with the U.K. in the coming weeks and months,” he said. “Those agreements will all be similar to the one struck with the E.U. They allow a certain amount of steel and aluminum to be imported into the U.S. from those countries that then will drop their retaliatory tariffs.”

This news was greeted with relief by U.S. boatbuilders, who collectively lost an estimated 50% of their exports to the E.U., representing a monetary value of more than $400 million since the trade tariffs were implemented under the Trump administration in 2018. “Dropping tariffs will be huge for U.S. boatbuilders,” said Jeff Johnstone, president of J/Boats, Inc. in Newport, Rhode Island. “Container shipping rates from the U.S. to Europe are less than 50% of what they are from Europe to the U.S., so there may be a quick rebalancing of imports/exports, which will help everyone out.”

“The boating industry has been fighting the trade war on two fronts,” online reports quoted Bill Yeargin, CEO of Correct Craft in Orlando, Florida. “First from the increased tariffs on imported parts and secondly with the retaliatory tariffs put on boats by both Canada and the E.U.” Yeargin estimated that the trade war cost the Correct Craft companies “millions a year” and commended the Biden administration for the negotiations that led to removing these tariffs and the NMMA for keeping the issue in public view.

Dave Clark, president and founder of Fulcrum Speedworks, a builder of sailing dinghies and foiling boats in East Providence, Rhode Island, joined his fellow boatbuilding executives in praise of the developments. “We definitely took a pounding in Europe in the summer of 2018, when [the tariffs] kicked in. That damaged us in the middle of a product launch in our first year of operation,” Clark said. While satisfied with the removal of the tariffs, he also warned that other roadblocks for U.S. builders remain in the European marketplace, including the necessity to enforce his company’s patents in each country, because “the E.U. is not a federal regime.” And doing business in the U.K., now that it has left the E.U., poses a new set of regulatory and administrative challenges, he added. “It taught me a lot about the slip between the cup and lip, but in general I’m very optimistic that [the end of tariffs] will prove to be a boon. I expect to sell more boats in Europe.”