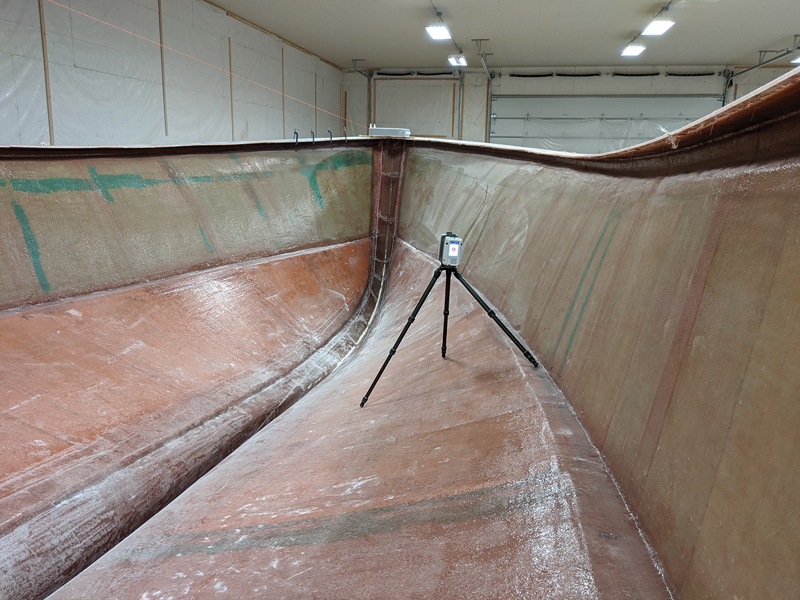 By 3D-scanning a hull still in the mold, Newport Yacht Builders can start design and construction of interior furnishings long before the hull is delivered to the shop.

A group of boatbuilding and refit specialists in Newport, Rhode Island, who had been collaborating successfully for several years, recently hung out a new shingle as Newport Yacht Builders (NYB). Formerly known as Newport Yacht Collaborative, the principals include designer Ezra Smith and refit guru Jim Thompson, who have collaborated on many projects in the past, including the design and construction of the Great Cabin on Oliver Hazard Perry, Rhode Island’s square-rigged flagship; the design and build of the interior of a 92‘ (28m) motoryacht; and the refit of a 136‘ (41m) classic motoryacht. Also on board is project manager Ashley Reville Hill, who runs CaptureRI, a 3D interactive scanning outfit founded by Thompson. 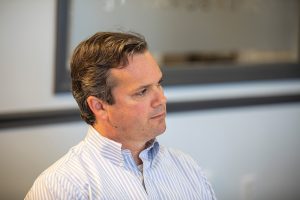 Designer Ezra Smith, one of the three principals of Newport Yacht Builders.

Together this team offers decades of relevant experience in design, new construction, refit, restoration project management, marketing, and administration in boatbuilding. Key to their endeavors are sophisticated digital tools, including CAD/CAM software, highly accurate 3D laser scanners from Leica and Artec, and a 3-axis CNC machine that enable NYB to prefabricate interiors while, or even before, the hull of a boat is being built.

“Working on my own, I realized how many really good people we have in Rhode Island in this industry,” Smith tells me, explaining the path that led to the new company, his appreciation for the industry network, and the direction he and his colleagues chose going forward. “I met good naval architects, engineers, and builders, and one of them was Jim Thompson,” whom he found to be a kindred spirit looking to build boats faster, better, and more efficiently. Smith uses the term “process geeks” to describe another commonality between them. 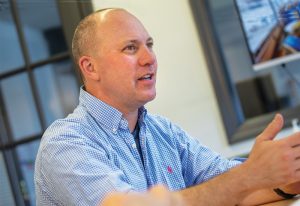 Both feel strongly about Rhode Island’s skilled boatbuilding workforce, but labor rates make it challenging to compete internationally. As a solution, the two started looking at process efficiencies to help make inroads in the 70‘–110‘ (21m–36m) custom market. “Let’s look at our process and see what we can do to gain competitive advantages,” Smith says. “Having done boats in Europe, we became interested in the Dutch model of decentralized builds.” Hulls are built in one location and go by barge through narrow canals to the next stop, where specialists install prebuilt interiors or other components. “It all has to be designed and figured out in early stages so it can be [built] decentralized, and all comes together,” Smith adds. “The beauty is that you’re not overlapping the trades. You can phase them in and out so they’re not butting each other for elbowroom on the boat. We really are trying to come up with a process to do what we like to do here and be competitive on the national and international markets. There are not a lot of people in the U.S. anymore building relatively big custom boats.”

To this end, Thompson acquired two sheds near the east end of the Claiborne Pell toll bridge, one for the busy 3-axis CNC machine, the other for building projects like a Mussel Ridge 46‘ (14.02m) lobster yacht, on tap for the winter of 2021–22. The hull won’t be built until spring 2022 at Hutchinson Composite in Cushing, Maine, but CaptureRI will travel to the Downeast builder soon to 3D-scan a sistership already in the mold with the same layup schedule. “It’s like Pretti Rose [a Mussel Ridge 54 that NYB completed in early 2021], where we’ll scan and then start on the interior before we even get the hull,” Smith explains. “I’ll drop my design of the interior into the scan and trim all the parts to the actual inside hull surface, so we can CNC-cut [the parts] and start production a good four to five months before we get the hull. It really speeds things up.” 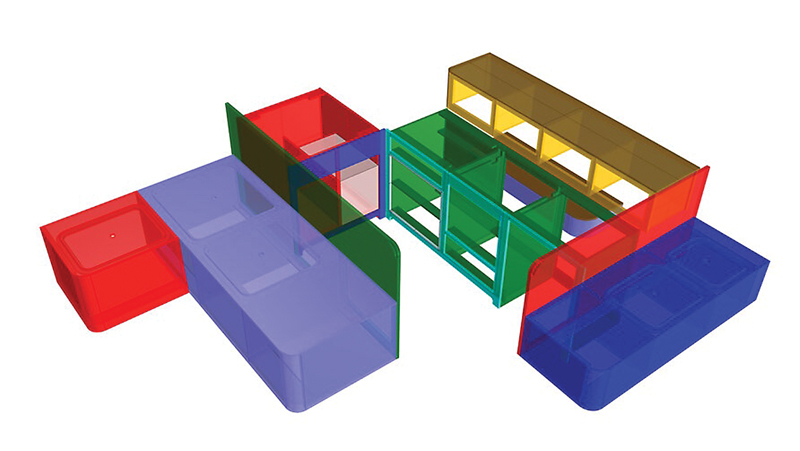 Working from the point cloud, Smith designs interior parts such as cabinetry, bulkheads, and seating to be CNC-cut to fit within a 3mm tolerance.

Smith says he developed a process to work directly from the point cloud he gets from the scans. “I want to work as closely to the raw data as possible, without processing and processing, going from the point cloud to the mesh and then from the mesh to surfaces.” These are big files, but he claims to have found a way to make them relatively easy to work with, designing directly within the point cloud envelope. “We’re working with a 3mm [0.12“] accuracy—bulkheads, interior components—cutting them and dropping them right in.” He says there’s no templating and minimal to no trimming, and that the process is constantly fine-tuned. 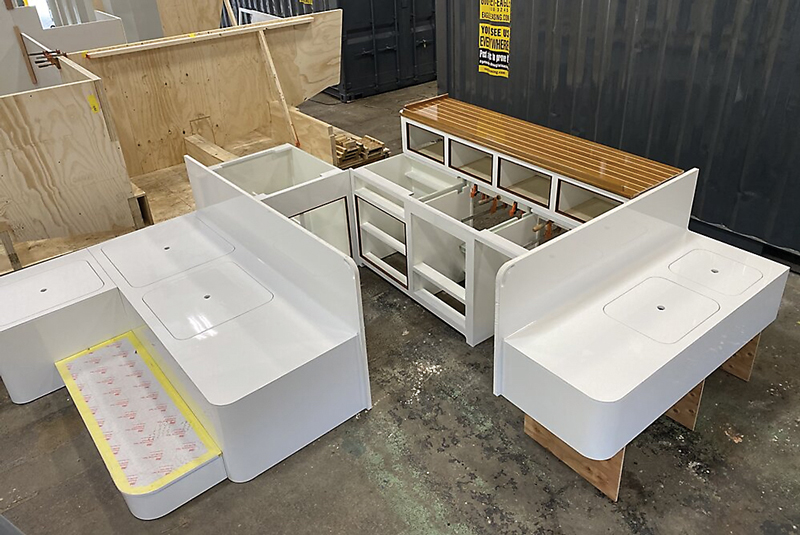 The finished parts are then staged and preassembled, ready to be dropped into the hull when it arrives.

If integration of scans and point clouds is one side of the coin, CNC technology is the other. NYB works in sheet goods and flat panels, thus avoiding complex and expensive molds, by putting together furniture carcasses and bulkheads straight off the 3-axis machine, no matter if it is plywood or cored composites such as a Gunboat 90 interior built from Tricel-cored and birch-faced sheets. “The process, whether using plywood or foam-core composites, is almost exactly the same,” Smith added. “We are able to make sophisticated shapes, all designed in Rhino,” which are then cut, folded, and popped together. “It’s a lot of fun.”