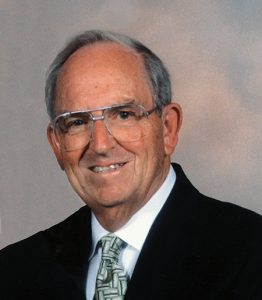 Victor Butler Porter of Decatur, Indiana, serial entrepreneur and chairman emeritus of Formula Boats, died October 24, 2021, in Fort Wayne, Indiana, at the age of 90. In an announcement, Formula Boats honored Porter, a lifelong boater, as “the heart” of the company, who transformed it into the renowned brand it is today.

His career was defined by his passion for boating and his determination to improve the design and quality of boats. A habitual entrepreneur, Porter ventured early into mobile home sales, real estate, and his own business—Vic’s Frozen Food Center and Center Ice Cream. In 1957 he started out in the marine industry as a salesman but soon decided that he knew how to build better boats.

Borrowing $3,000 he founded Duo Marine in Decatur in 1958, building a 14‘ (4.27m) twin-outboard-powered catamaran, followed by runabouts, tri-hulls, and one tunnel-hulled craft. Porter then acquired Aqua Swan, a manufacturer of aluminum boats, and Crownline. In 1967 he sold Duo Marine to Bangor Punta Corporation, owner of Starcraft Boats, but remained president until 1970. Next, he founded Signa Corp., building inboard- and outboard-powered tri-hull boats, but in 1973 sold to Fuqua Industries, the parent company of Thunderbird/Formula boats.

He continued to serve as president of Thunderbird/Formula/Signa for three more years, ultimately purchasing the three lines in 1976. He grew the company to 600 employees working in a 345,000-sq-ft (32,051.55m2) facility, and the Formula boat brand became widely recognized for design and quality. The firm housed product engineering, design, production, sales, marketing, and management under one roof.

Vic Porter is survived by his wife, Kristine. They have six children, five of whom are actively involved in the Formula Boats business, and 17 grandchildren. (Source material gathered from www.nmma.org and www.hshfuneralhome.com.)