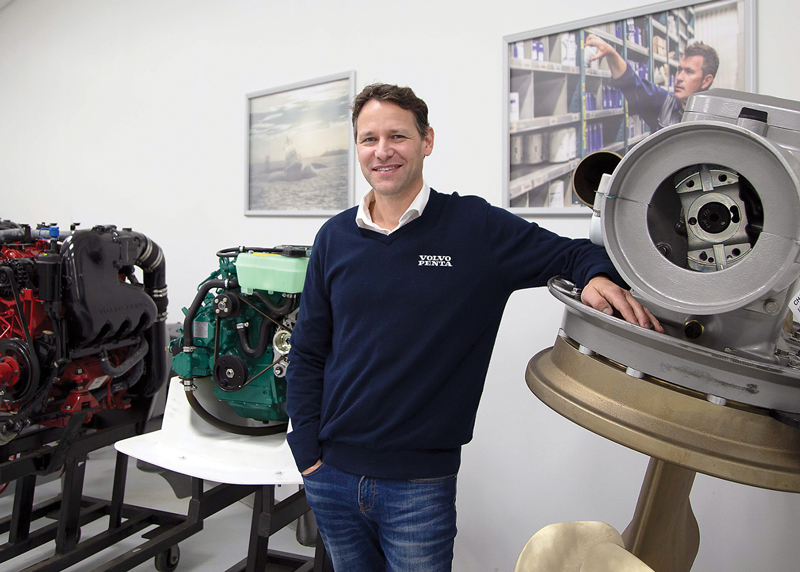 Magnus Gedda, product training manager at Volvo Penta of the Americas, is one of the recognized marine-service-technology instructors. He hails from Sweden and has worked different jobs for Volvo Penta starting in 2004.

The American Boat & Yacht Council’s Foundation announced its picks for the 2021 Educators of the Year, an award that recognizes individuals who distinguished themselves as marine-service-technology instructors teaching in high school, a post-secondary institution, or within the U.S. boatbuilding industry.

This time the award was split between two winners: Magnus Gedda, 48, a product training manager who oversees the marine and industrial product training programs for Volvo Penta dealer technicians, OEM partners, and customers located in North, Central, and South America; and Anthony Margiotta, 39, a member of the faculty and a marine engineering instructor at the College of the Florida Keys (CFK). Both recipients shared their perspective of marine-service-technology instruction during a pandemic and a period of high industry demand.

Gedda, from Borås near Gothenburg, Sweden, has worked with Volvo Penta since 2004 in various roles, including service manager for the competing yachts in two Volvo Ocean Races. Since relocating to the U.S. in 2015 to work at the head office of Volvo Penta of the Americas in Chesapeake, Virginia, he supervised the training of approximately 10,000 students, more than doubling participation over the past five years. Compared to his jobs in Sweden, here “it is much closer to the customer on a daily basis,” Gedda said.

“We are supporting [more than] 1,800 dealers in the Americas and were under pressure when COVID came around the corner. We basically had no choice. We were an organization that went from 100% in-person classes to 100% online. When the spread eased and vaccines became available, the teaching model swung back to a 50:50 hybrid model of online and in-person classes. There will always be dealers that prefer to send their technicians to in-person classes, because in school, they will be able to touch and run the products before taking them apart and putting them back together.”

The core products for North America are gasoline engines in the recreational sector, so that’s a focus of the Volvo Penta courses, along with the D4 and D6, the company’s diesel engines specifically developed for marine use, and the Electronic Vessel Control (EVC) systems. Others include the larger diesel engines (D8, D11, D13, and D16) found in industrial and marine applications.

To teach online, Gedda said he and his staff use Adobe Connect, which offers some unique tools for instructors and students that help manage workflow and attention span. Overall, he noticed improvements “not only in software but also with instructors, who are now more experienced in teaching online, and frankly the students also accept that good learning is possible online.” Another helpful feature for Gedda is the ability to record product-update webinars that can take up to several hours but are then made available offline for students or as a reference for shop technicians.

In the future, Gedda expects more instructor-led certifications for electromobility applications offered by product training and continued certification for ABYC standards, which is also conducted by ABYC directly at the facilities of Volvo Penta’s North American headquarters in Chesapeake. 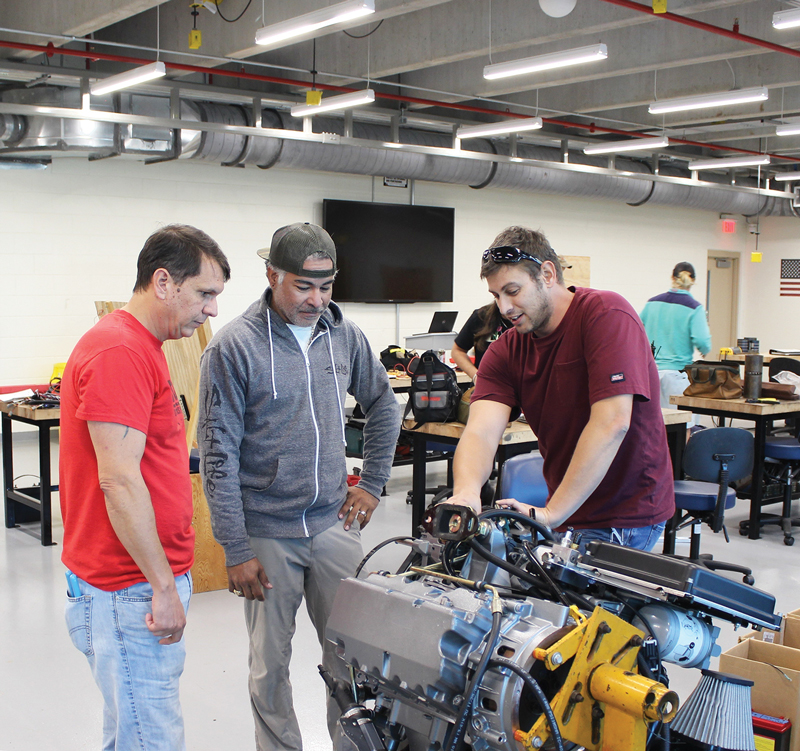 A former U.S. Coast Guard quartermaster and bosun’s mate, marine engineering instructor Anthony Margiotta (right) works with students during a class at the College of the Florida Keys.

Margiotta has been teaching since 2013 in Key West, Florida. Originally hailing from Belleville, Illinois, Margiotta joked he ended up in the Conch Republic “by accident” through his nine-year service in the U.S. Coast Guard as a quartermaster and later as a bosun’s mate. “I got sent to a land unit, started working with mechanics and electricians, and I fell in love with that side instead of being on the bridge,” he remembered.

Although he wasn’t explicitly pursuing a career in teaching (he intermittently worked in the tourist industry), he set a course that took him there, by continuing his education and picking up skills and certifications along the way. “When I got out [of the military], I got an associate degree in engineering from Miami Dade College,” he said.

Starting at CFK in 2013 after answering a newspaper ad, he initially taught seamanship and navigation, which he still knew from his days as a quartermaster, but eventually moved to marine-service-technology instruction. He took part in certificate programs, e.g., for BRP and Johnson Marine products and got his certification as an ABYC Master Technician and in the Yamaha Certification Program train-the-trainer course. In 2016 he joined the faculty full time to teach a two-year curriculum in marine engineering.

As a member of two ABYC Project Technical Committees (Hull Performance, and Navigation Lights and Sound Signal Appliances), Margiotta teaches to the organization’s standards. Like Gedda and many other peers in the field of teaching technical subjects, he had to orchestrate the pivot away from in-person instruction to full online teaching during the early months of the pandemic, which hit the Florida Keys much later and less severely than other parts of the world.

However, as soon as things eased somewhat in the summer of 2020, he went back to hands-on instruction. “I’ve been in class face-to-face with the students, doing it in a limited capacity,” he said. “Classes were no larger than 20 students, and when we worked on engines or electrical systems on boats, groups couldn’t be larger than six, and we adhered to social distancing and mask wearing. But we were able to get back to face-to-face a lot quicker than some of the other schools.”

At CFK the work of the marine-service-technology instructor focuses mostly on gasoline engines, as they are still the most popular source of propulsion in the area, but Margiotta also keeps an eye on the future when alternative propulsion systems become more common in the mainstream market. “We do get into marine auxiliary systems with wind generation, solar power, and hydrokinetics, and how we can use those to recharge battery banks,” he noted.

Of more immediate concern is connecting students with industry so they can find gainful employment as graduates. The college does not have a permanent apprenticeship or internship program yet, he said, but offers one that students can take for college credit. “Essentially they can work for an outfit in the marine industry to get some real-world experience.” He reported cases where students found work at Mako and Everglade Boats or successfully founded their own business.

As a Yamaha Marine Partner school, the college offers some of that company’s certifications, but even so, only about 40% of open jobs are currently getting filled. “We’ve noticed that businesses don’t want somebody that just has an associate degree in marine engineering,” he added. “They’re looking for Yamaha certifications, Mercury certifications, ABYC certifications. So, we’ve been getting those connections [with manufacturers] to get these students certified before they leave.”

Down the road, CFK might also offer a bachelor’s program for marine engineering. But first, the focus is on more vendor-specific and ABYC certifications and adding advanced diesel diagnostics to the curriculum.

Responding to shifting market demands, the marine industry is fast changing, and marine-service-technology instructors like Gedda and Margiotta are being recognized for their past success and for ensuring their institutions continue to meet the biggest challenges the industry presently faces: preparing newcomers for the demands of a dynamic job market while updating the education of seasoned practitioners who seek to expand their skill set.

In related news, the ABYC Foundation notified us about their first official Marine Trades Accreditation Program (MTAP) for schools educating marine-service-technology instructors. The purpose is “to ensure quality training that is aligned with industry needs, at high school and post-secondary schools, ultimately creating a bigger and stronger pipeline for much needed entry-level workers,” according to the Foundation’s announcement.

Interested schools first need to become an “ABYC Foundation Affiliated School,” before they can obtain accreditation, which requires a rigorous application process, passing board review, and an on-site visit. The ABYC Foundation says those schools must also maintain professional development and academic training for instructors.