In “Notes on Sailing-Yacht Hullforms” (Professional BoatBuilder No. 196, page 32) naval architect Jay Paris, citing drawings and photographs of his own designs as well as the lines of other designers, detailed some characteristics, attributes, and design methods used to develop monohull sailboat hullforms. Because of space constraints in the print magazine, we are publishing Paris’s additional notes and reference material on Proboat.com. In addition to his sections on fin-keel variants and parent hullforms, Paris includes a reference list of hullforms worthy of note for a number of reasons—aesthetics, excellence as examples of their type, historic significance, or design methodology. All but one of the hullforms in this Part 2 are round bottomed, and all the yachts cited, which were built during the past century, are wooden boat designs. The lengths for the hullforms in this article are length of hull (LOH) since length overall (LOA) includes extensions to the hull such as bowsprits and boomkins and length on deck (LOD) is often less than the hull due to bulwarks and reverse transoms. —Ed.

A variant of the fin-keel design is the twin-keel. Most common on coastal cruisers intended to take the ground when the tide is out, they reflect an empirical approach to their design. A few are serious offshore passagemakers, including the noteworthy Bluebird of Thorne. 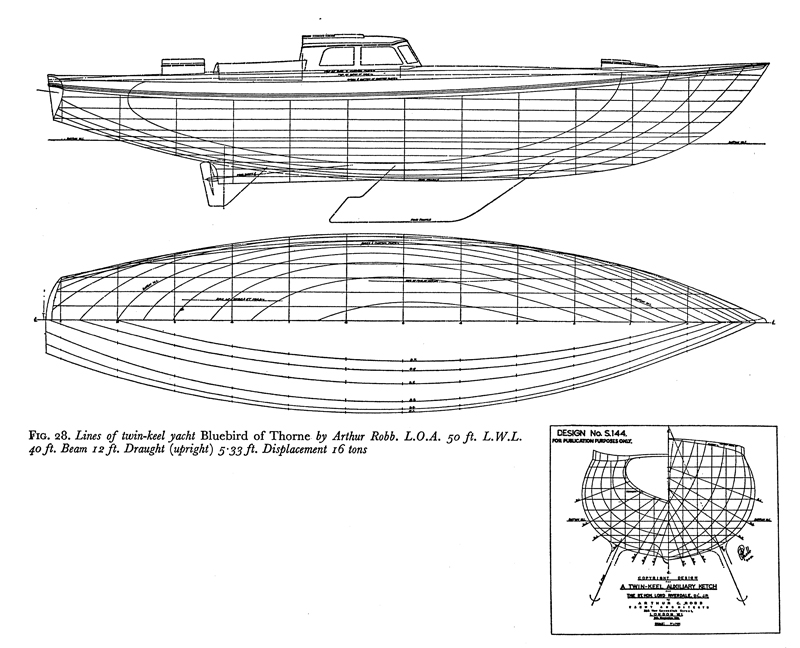 This design is the combination of Robb’s talent and tank testing along with Lord Riverdale’s experience with his previous Bluebirds when he was R.A, Balfour. Bluebird of Thorne’s keels canted outboard at 20°, and normal to her near circular midsection, were low aspect ratio, highly swept back asymmetrical foils that Robb implied were towed inboard and certainly were more sophisticated than those of almost all other twin keelers. Robb’s strong favorable opinions about this design concept have been frequently quoted in detail.

A more current fin-keel variation is the use of canting keels, with or without lift-generating sections, employed on offshore racers to shift the ballast bulb to weather to increase their righting moments.

Historically, designers have used specific earlier boats as the basis for follow-on designs, in some cases very closely but with changes in the overall size and proportions. For example, Nathanael Greene Herreshoff had noticeable success using his 26’ (7.92m) Alerion III NGH 718 of 1912 as the parent for designs as large as the 33.42’ (10.19m) Newport 29 of 1914 and the 43.25’ (13.18m) Fishers Island 31, designed by his son Sidney using NGH’s offsets. 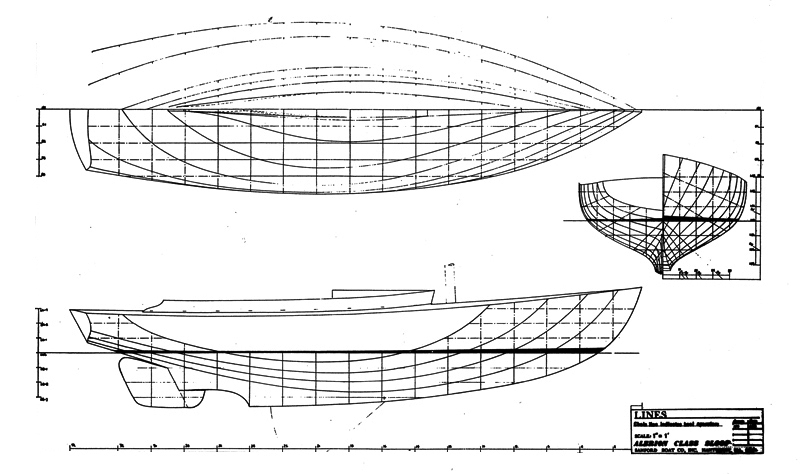 The lines shown incorporate the cutaway deadwood aft with a balance portion of the rudder forward of the rudderstock as found in the Alerion copies by the Sanford Boat Company. Eliminating these features would restore the lines to the original NGH configuration.

Maynard Bray, in his book Aida, includes a photograph of Herreshoff’s offset booklet pages used in the mathematical expansion to create the 33.67’ (10.26m) Aida of 1926. The Buzzards Bay 25 of 1914 looks perhaps to be the least likely of being an Alerion derivative. 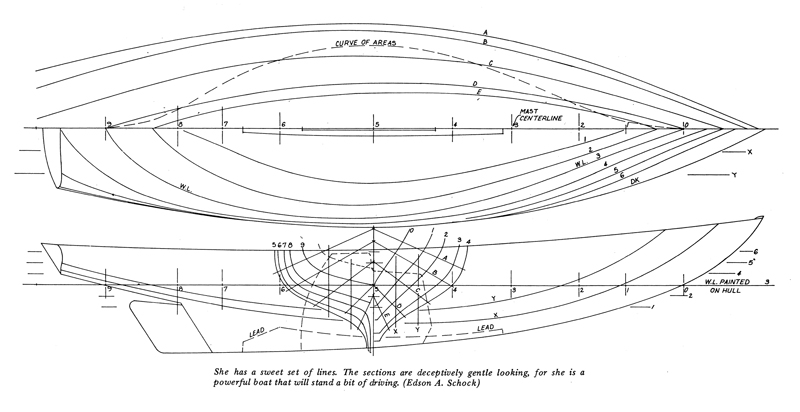 L.F. Herreshoff said the Buzzard’s Bay 25 was his favorite of his father’s designs. 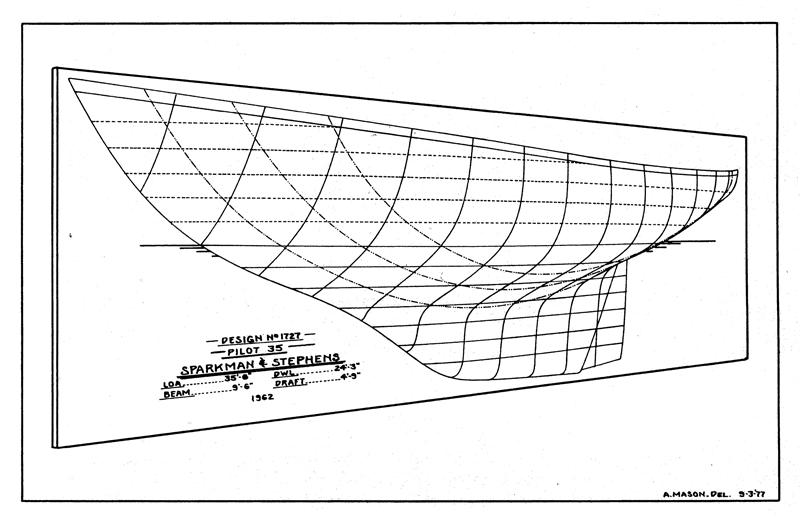 Since there are not lines available in my references for the 1962 Pilot, this rendering by Al Mason gives a good sense of her hullform. Mason drew perspectives for many S&S designs. 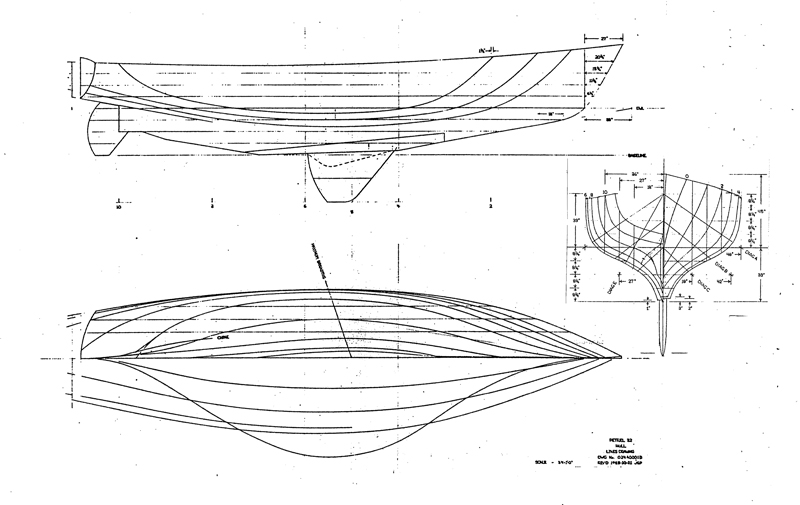 While the P-32 hullform had many atypical features, a number of them were optimized for her longitudinally framed wood-foam-wood composite construction. 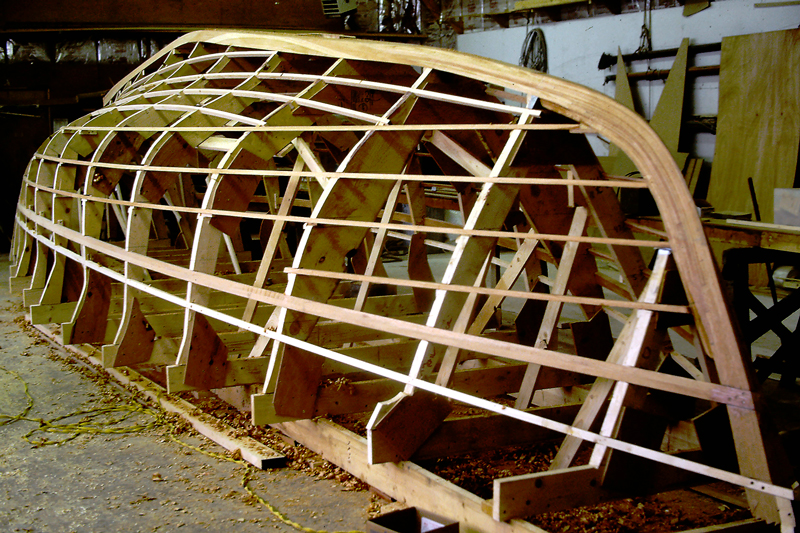 Those using state-of-the-art yacht design software often morph parents to the extent that their design “DNA” is no longer apparent.

Hullform evolution is similar but less slavishly derivative than the use of parent hullforms. The Viking ships of a thousand years ago are candidates for the most elegant hullforms of all time. The Scandinavian preference for double-enders has followed this fashion in some degree to modern times. Colin Archer’s Redningsskoite (rescue boats), which evolved from them, have inspired designers to this day. William Atkin’s 38’ (11.58m) ketch Ingrid, his highly refined granddaughter of this type, is considered to be one of his best designs.

Ingrid’s fine lines with a wineglass midsection and 6 tons of outside and internal ballast contribute to the design’s good performance.

Knud Reimers’s Cohoe is a 1932, 32’ enlargement of his famous and beautiful 27’ (8.23m) Tumlare of 1927. These designs introduced lighter displacement and finer lines than earlier Scandinavian double-enders. Many consider the Tumlares to have the most beautiful hullforms of all time. 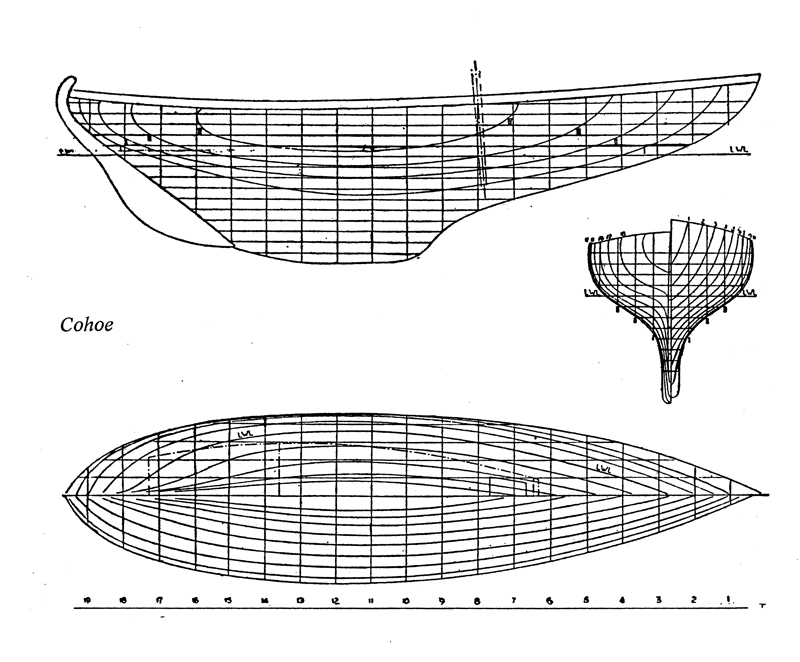 Knud Reimers, well-known for his Square-Meter boats, applied the same design philosophy to this double-ended cruiser. Reimers and I discussed his diagonals and contracted fairing approach during a week of sailing in the early 1970s.

A small Danish fishing boat type with very full sterns typical of the sound north of Copenhagen was the parent of the Spidsgatter classes of sailing yachts. Aage Nielsen, a Dane, was familiar with the type. Some of his smaller designs from 15’ to 26’ (4.57m to 7.92m) were referred to as Nielsenized Spidsgatters. Their full sterns were models for that of Holger Danske, his 42.5’ (12.95m) cruising ketch that won the 1980 Newport-to-Bermuda Race by a large margin. 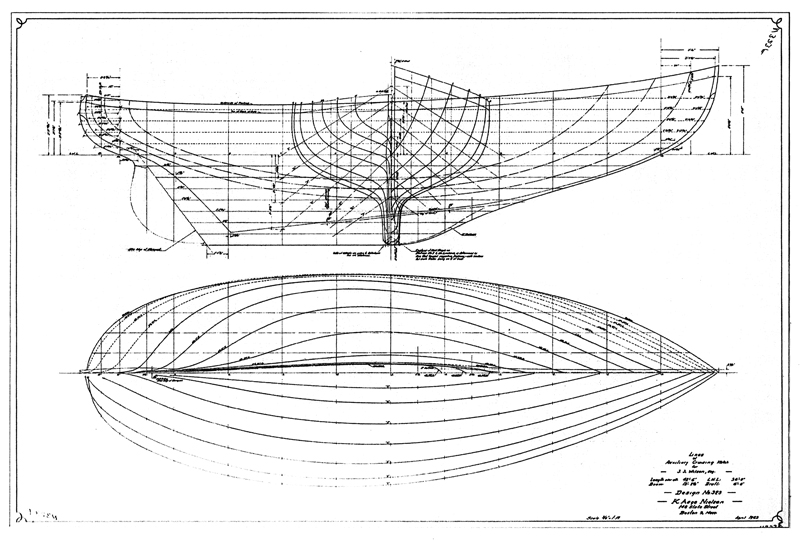 Bray, Maynard and Tom Jackson. Worthy of the Sea, 2006

One of Aage Nielsen’s favorite designs, Holger Danske, had a slippery hull, a low rating, and sailed like fury on a reach.

Over time, many working craft have served as models for sailing yachts. The danger, at times, has been designers ignoring the original function, loading, and the wind and sea conditions for which working craft were developed.

Design evolution can also be seen amongst ocean racers. Olin Stephens’s Stormy Weather came seven years after the famous Dorade of 1929, which had introduced the forms of his earlier inshore Six-Meter designs to the offshore world. These two sisters established a trend for blended-body ocean racers for some four decades. 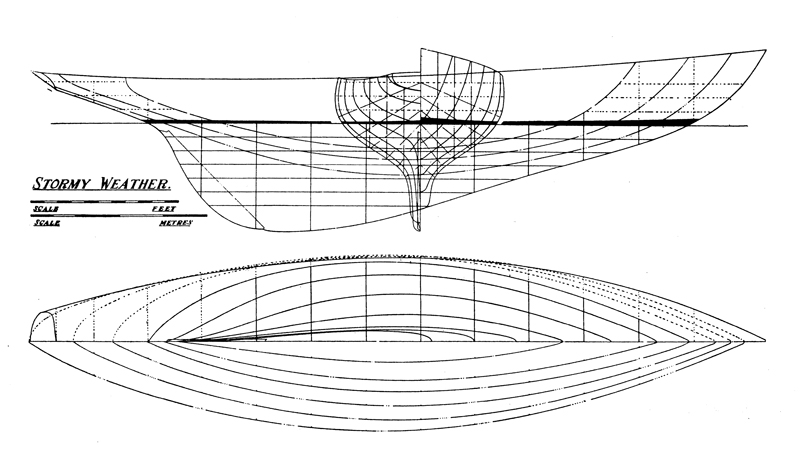 Stormy Weather, slightly longer than Dorade, of similar displacement but with 22% more beam, was a favorite of her designer.

Sources From My Library

Starting before high school with the original five Uffa Fox books of 1934/1938, my office library has grown to almost a thousand books on sailing and sailing yachts with most containing technical material as well as numerous technical reports. I also have some 100 volumes addressing hydrodynamics, aerodynamics, and aerospace design containing material applicable to sailing yachts not addressed in yachting publications.

Lines drawings from my library that I consider worthy of note and reference but not embedded in the text are shown below with captions and sources. Note: Lines in the early five Uffa Fox books were redrawn by Fox. 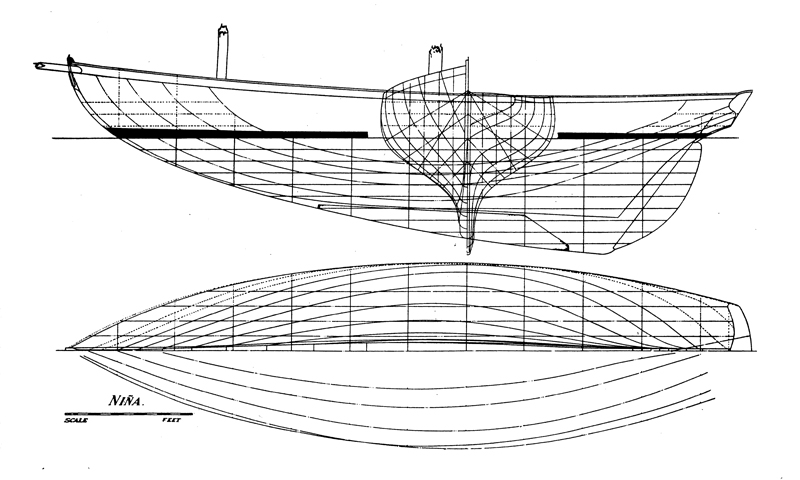 Just one of Starling Burgess’s many beautiful sets of lines from the multi-talented aviation pioneer and yacht designer. Nina’s blended body hullform was a very early example of the long waterline with short overhangs concept currently (2022) in vogue.

Howard I. Chapelle was an eminent yacht designer and a historian who chronicled the designs of American working sailing craft. He chose a traditional clipper-bowed centerboarder to illustrate the steps in developing a lines drawing in his classic text on design of 1936. 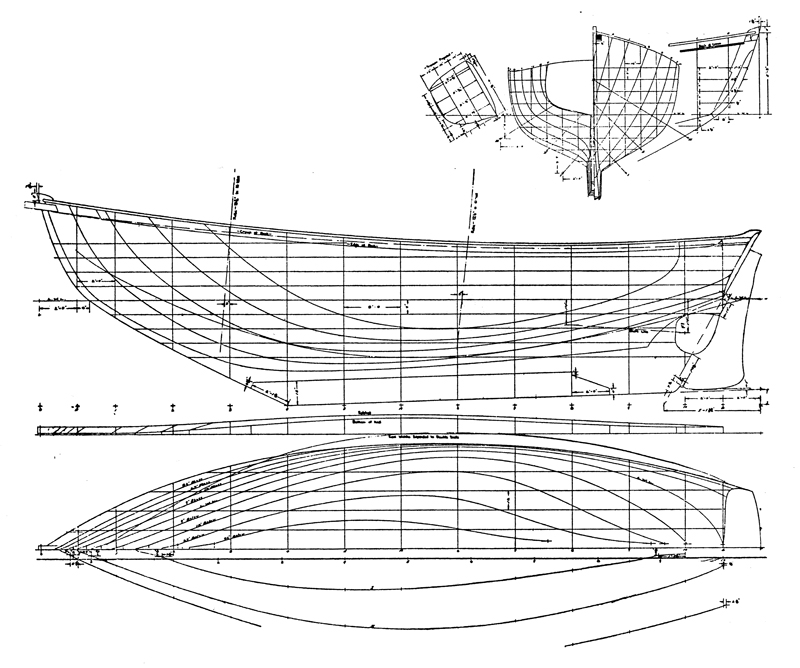 Frederick Fenger was an advocate of the dhow hullform with its unusual maximum draft near the bow. Diablesse’s maximum draft was 23% of the waterline abaft the bow. Her forebody had V-shaped sections, hollow waterlines, and easy diagonals. 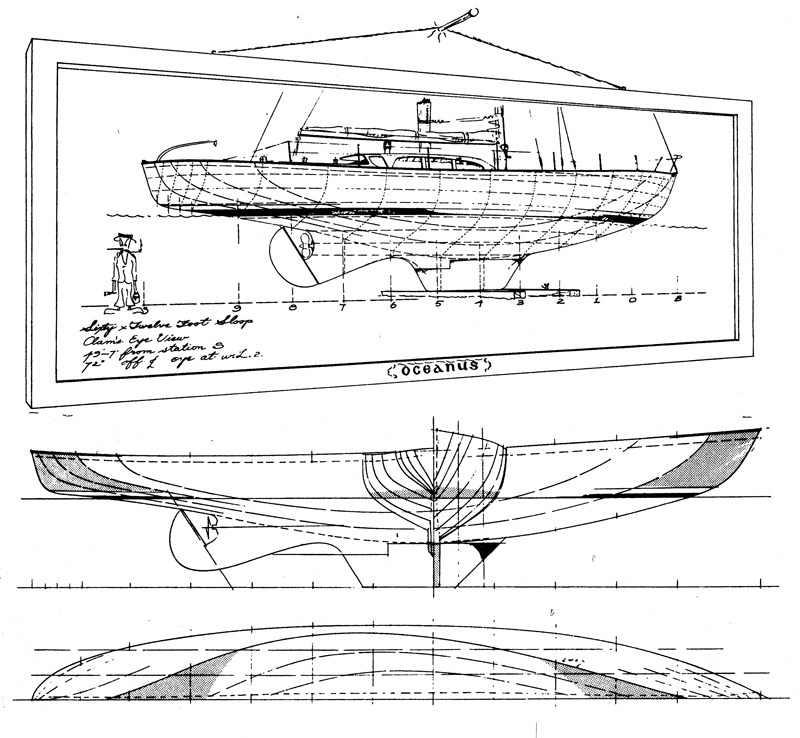 An example of a designer’s atypical boat for himself. An elegant, narrow sixty-footer (18.29m) intended for a crew of two, Garden and his wife. Interestingly, to quote an article in the January 1961 issue of Motor Boating: “Oceanus was launched bottom up; there were considerable advantages in building her hull that way, and she was run into the water, parbuckled, and pumped out at insignificant cost and no risk compared with the tricky job of turning a hull of that size on shore.” 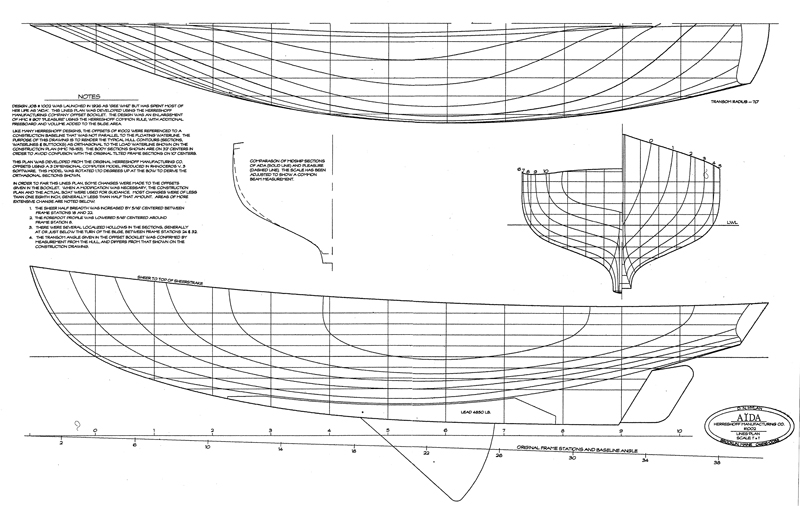 Lines drawn by Doug Hylan from Original HMC 1002 Offsets. For the subtitle of his book, Maynard Bray wrote, “N.G. Herreshoff’s finest shallow-draft yawl.” Adding to the praise is the quote in the Preface that L. Francis Herreshoff called her “probably the finest boat of her size in the world.” In his book, Bray documents the evolution of Aida from Alerion through Pleasure NGH 907, the second of his shallow keel/centerboarders with low-aspect-ratio triangular foils. 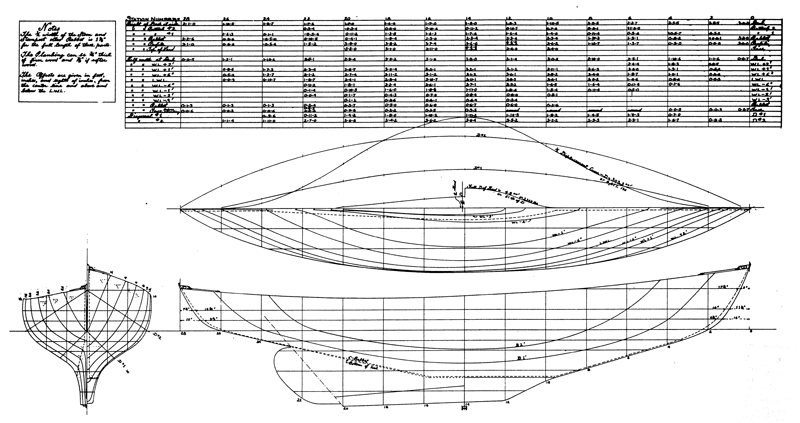 LFH’s graceful and leaner interpretation of the English canoe yawl was the only example of its type to be widely seen on American waters. Roger Taylor quoted LFH: “A canoe yawl can be about the safest that can be had since her design is based on those most seaworthy open boats ever known—whaleboats.” 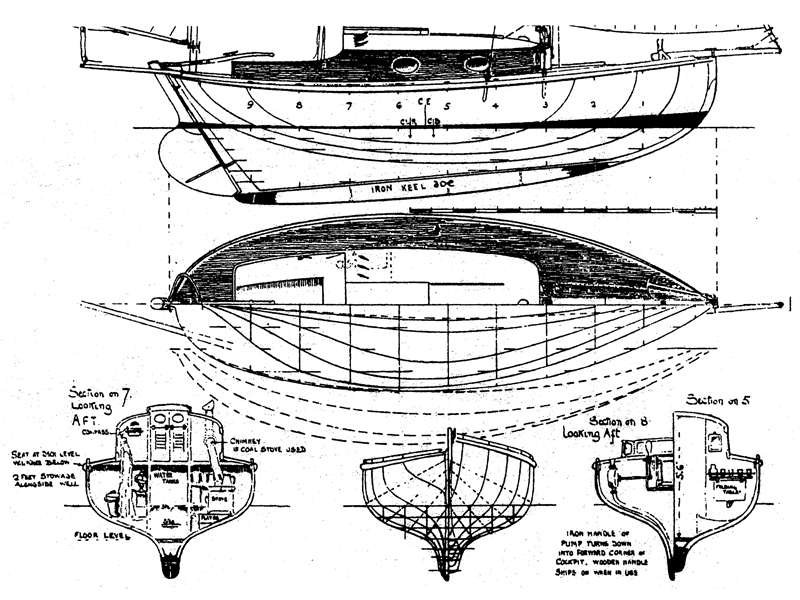 George Holmes, a designer and artist, was in the forefront of the English canoe yawl world. The term canoe yawl deserves explanation. It has nothing to do with the rig but rather with size, it being the same size or smaller than a ship’s yawl boat. The term canoe relates to it being either a day boat or coastal cruiser. 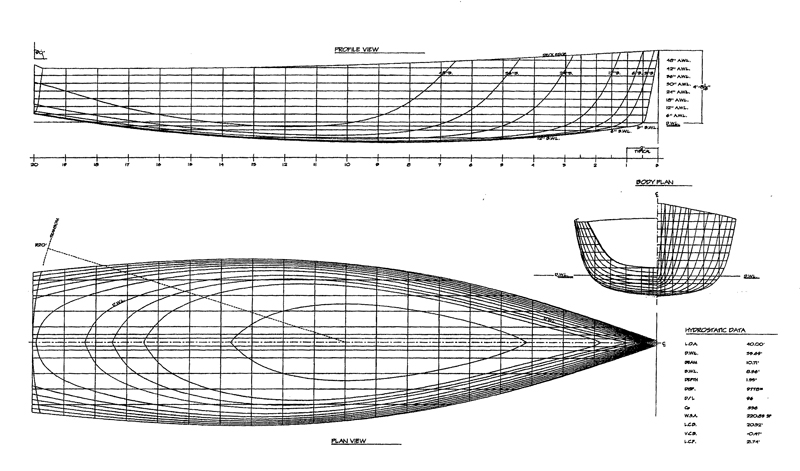 A significant departure from Perry’s early double-enders, this is one of his light-displacement sleds, for a couple with the emphasis on off-the-wind speed. His early designs were often double enders including the iconic Valiant with its full-ended cruiser stern. The term cruiser stern refers to the sterns on the cruiser class of warships prior to World War II. 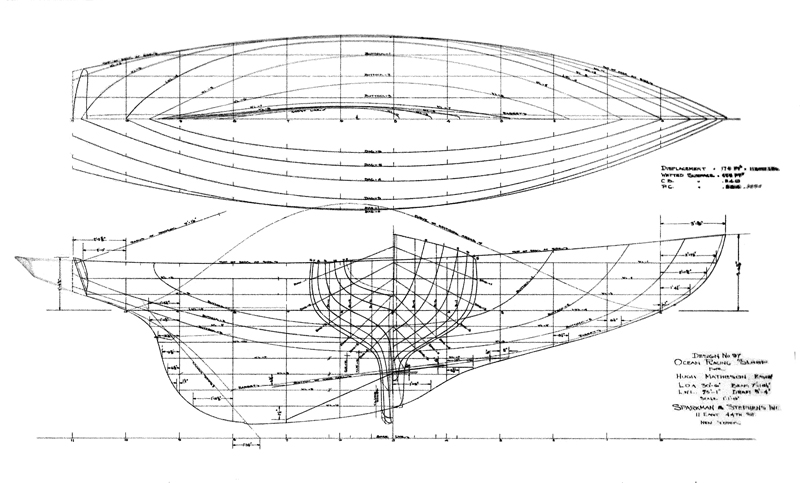 Kinney, Francis F. and Russell Bourne, The Best of the Best, 1996

Babe, a favorite of Olin Stephens, was one of the 49 designs he illustrated and commented on in his book Lines. The modern S&S 30, purported to be an update of Babe and assigned a “1935” based design number 97-c2, has nothing in common with the original’s hullform.

Although conventional thinking states that deep draft is required for optimal windward performance, the heavily ballasted 12-Meters with minimal salient keel prove the exception. While articles about S&S designs often stated new from the board of OJS, it was not so during my time at the Madison Ave. office. Olin’s board did not have any room for drawings, so he would come into the main portion of the office to review a designer’s work and suggest changes, for example, to Mario Tarabocchia’s 12-Meter lines. I had the privilege of being involved in this process with the preliminary design of S&S 1770 Ta Aroa a New Zealand A Class racer. Olin had me start with a 5.5 meter’s lines, doubling their size, and proceeding under his guidance. 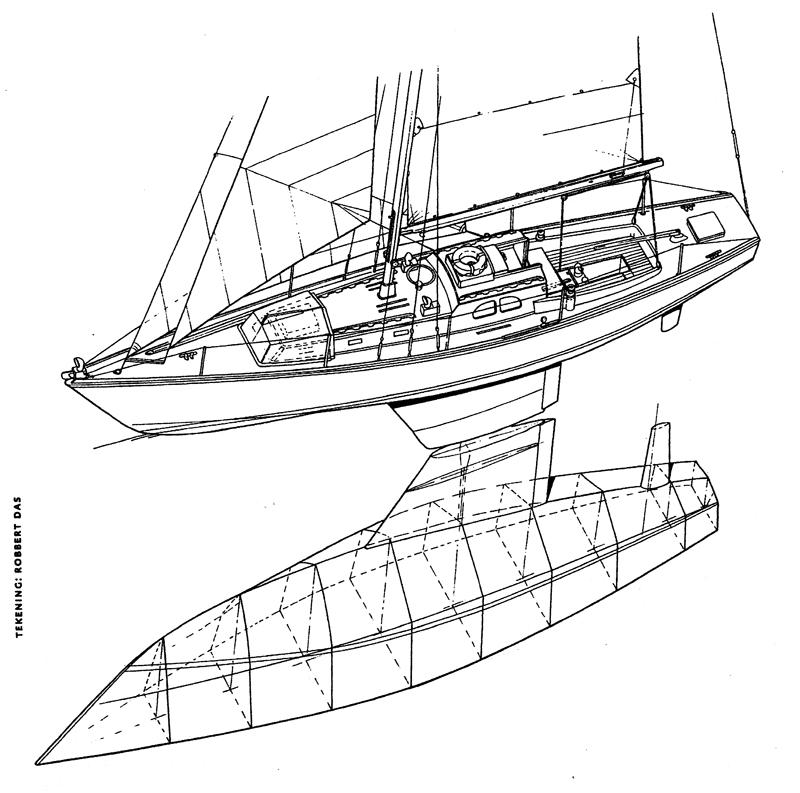 This second design of E.G. van de Stadt’s and the first for Bruynzeel established his reputation as an innovative designer with a preference for fin-keel, spade-rudder configurations. This perspective or isometric illustrates Zeevalk’s V-bottom hullform and the short-chord trim tab on the trailing edge of her fin keel. 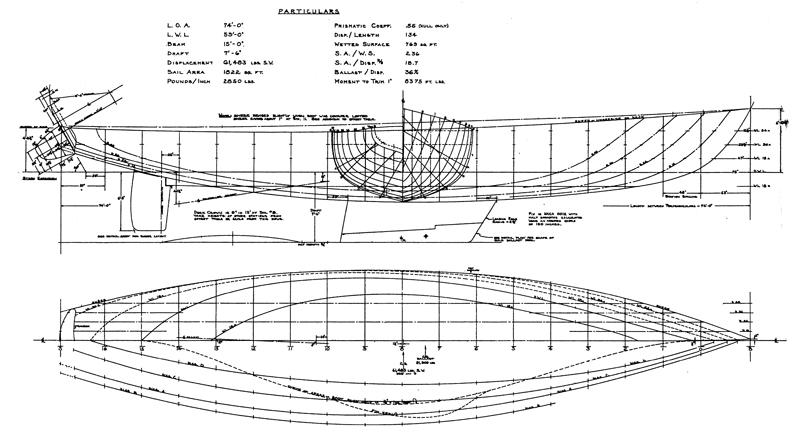 Joel White’s designs varied from traditional hullforms and construction in the fashion of Herreshoff and Nielsen to cold-molded fin keel types.

In the following books, design examples illustrate the step-by-step creation of the lines reflecting the hullforms in fashion when the texts were written:

For a more theoretical explanation of the factors influencing sailing yacht design, I recommend:

Fossati, Fabio. Aero-Hydrodynamics and the Performance of Sailing Yachts, 2007.

About the Author: While attending Webb Institute Jay Paris worked two winters and one summer at Sparkman & Stephens. His graduate studies at MIT focused mostly on oceanography and research-vessel design. He also managed the MIT towing tank and operations of the yacht-testing program and participated in the international investigations into the 1979 Fastnet Race disaster. After MIT he was involved in the design of winches for the America’s Cup and high-end racing yachts, the design and construction of various sailboats, and the writing and editing of articles on sailing yachts for a number of different journals.