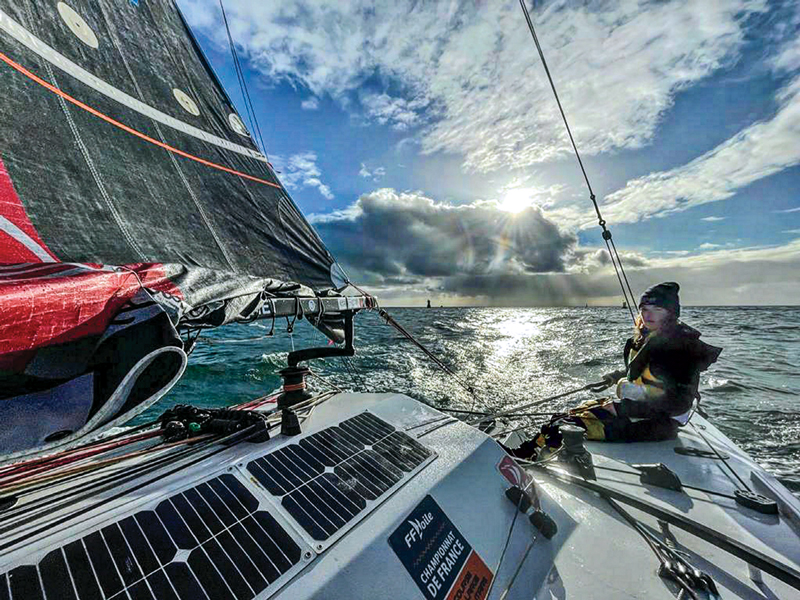 Sea-trialing Alisia, Olson is aiming to become one of the few American women to ever
compete in this race and one of even fewer to sail on a Mini prototype.

Every two years a solo race across the Atlantic leaves from France and finishes in the Caribbean, with a stop in the Canary Islands along the way. It is known as the Mini Transat. While the course is maxi, with 4,050 nm, the boats are mini, measuring 21‘ (6.50m) LOA by 10‘ (3.05m) beam, with a draft of 6‘ (1.83m). There are two classes of boats: series and prototype. While the former are production boats that abide by stricter rules, the prototype class invites designers to experiment with canting keels, water ballast, and foils that lift the boats out of the water to reduce drag and increase speed.

This race is sailed solo with no outside assistance allowed. As with other singlehanded races, skippers may rely on an autopilot to steer. Preparation takes approximately two years, during which sailors must complete a total of 1,500 nm in class Mini regattas with their own boat, and a 1,000-nm solo sail to prove mental and physical fitness. 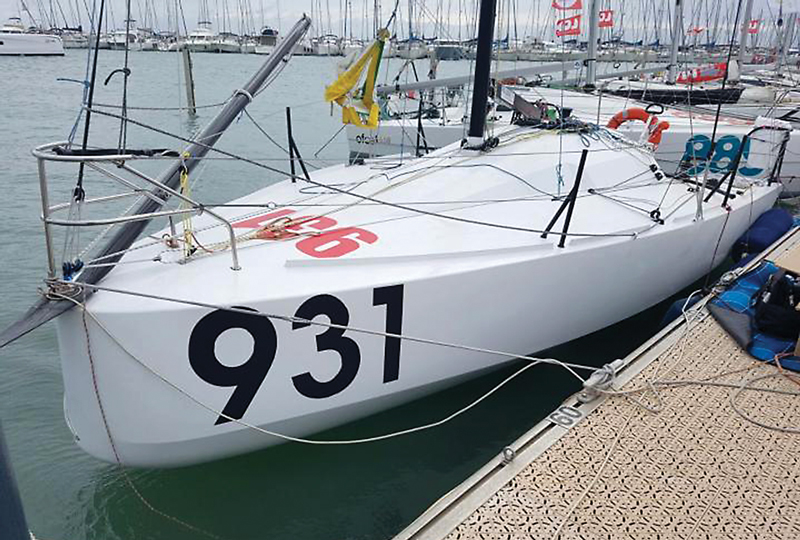 I was raised off the coast of the Florida Panhandle on a 44‘ Islander Sloop and have spent my entire life working on sailing yachts. I took my first skipper’s job in the Caribbean at 21, and then sailed offshore, delivering boats between the U.S. and the Caribbean. I skippered my first race program with the W Class in New England at 24, competing in the Candy Store Cup, the Nantucket Race, and the Corinthian Classics. Later I took a position as bow woman on board a Spirit-of-Tradition yacht, which I raced in the New York Yacht Club’s 175th Nantucket Regatta and the famous Les Voiles de Saint-Tropez in France. I crossed the Atlantic three times, raced in numerous in­shore and offshore regattas around the world, and now live in Europe full time. In the 2023 race, my aim is to be one of the few U.S. female skippers to compete in the Mini Transat and to race a demanding Mini prototype.

In May 2021, I arrived in La Rochelle, France, to start my story with the Mini prototype #931 named Alisia, designed and built by Etienne Bertrand in 2017. The boat has a carbon hull, a canting keel, an adjustable mast foot, two daggerboards, and a demi-scow bow. The original carbon rig was replaced in 2019 by Heol Composites with another carbon stick and Dyneema standing rigging. The boat had been left unattended on its trailer for a year or more in the back of a maritime industrial zone. The keel was lying underneath the boat with several pockmarks in the lead bulb. The mast was left on deck wrapped in plastic with both ends sticking out. The stanchions had suffered from electrol­ysis. There was a 3“ x 3“ (7.62cm x 7.62cm) area of delamination poking through the faded bottom paint by the opening insert for the keel, a critical area that has to withstand a lot of stress. The lines on the deck were faded from sun exposure. Already there was going to be a lot of work. 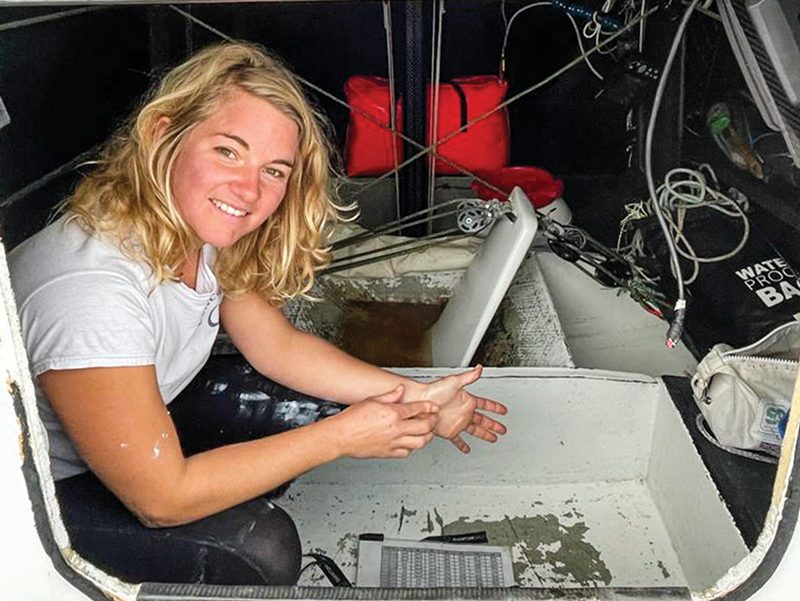 Olson’s refit of the Mini’s keel area was hands-on. She grew up on a 44′ Islander Sloop and has spent her working life on sailboats.

First on my job list was to apply a new carbon patch on the hull and then to reinstall the keel. Everything else could be worked on when the boat was returned to the sea. Prépa Nautic, a small local yard that specializes in work on Minis, came to tow the boat into its warehouse, where I started on the prep work with materials they supplied for this job. I used yellow painter’s tape to separate the bottom paint from the hull and the speedometer. Using 80-grit sandpaper and an orbital sander, I began to expose the carbon around the delaminated carbon sandwich laminate to see how large the damaged section was. Afterward, I sanded approximately 3“ (76mm) in each direction from the damaged spot to prepare for a patch of Gurit XC411, a ±45° biaxial 408-g/m2 (12.03-oz/sq-yd) carbon fabric, as a reinforcement to protect and strengthen the area. On further inspection we deduced that the area was delaminating because the previous patch had not been installed properly, possibly without vacuum-bagging, and because we found air holes that expanded over time, allowing water intrusion. 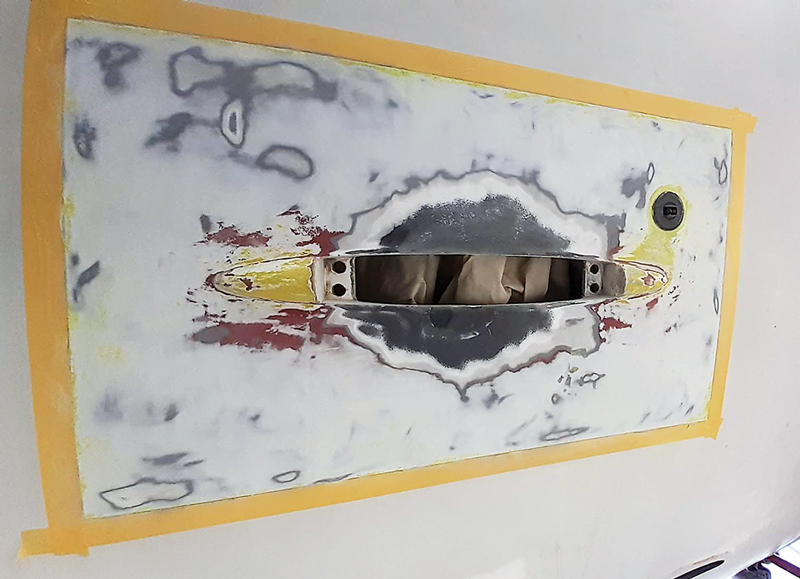 With 80-grit sandpaper and an orbital sander, Olson exposed the damage around the keel insert on the outside.

When patching carbon, it is common practice to vacuum-bag it into place, especially during hull repairs, which have to be light and strong. Before installing the patch, I continued to sand the bottom to prep it for painting after the repair. This is where the next problem was discovered. Forward and aft of the keel were cone-shaped reinforcement points that normally would be made of foam-carbon sandwich that is painted afterward. These are extremely important, as they take 70%–90% of the loads when the keel is canted. But the fun did not stop here.

As I sanded away the old paint, it became clear that the old foam had just been painted over. So, as on the other problem spot, I sanded all the outer paint layers until the carbon of the surrounding hull was completely exposed so the patch could bond to the existing hull skin. This part had to be done carefully to avoid sanding into the foam, so I did it by hand after taking down the outer paint layers with the orbital sander. Because I was on a roll, I kept sanding the hull, the keel, and both rudders, which all needed new bottom paint.

There were small holes, or what looked like bubbles, by the hull opening where the keel is inserted. The next step was to fill those holes with West System 105 two-part quick-cure epoxy resin, thickened with silica, using a plastic scraper and removing the excess. Normal drying time would be about 15 minutes, but I gave it an hour due to high humidity that day. Then I lightly sanded with 120-grit to even out the surface and thoroughly wiped it with clean rags and alcohol to remove any dust, grease, oil, etc. 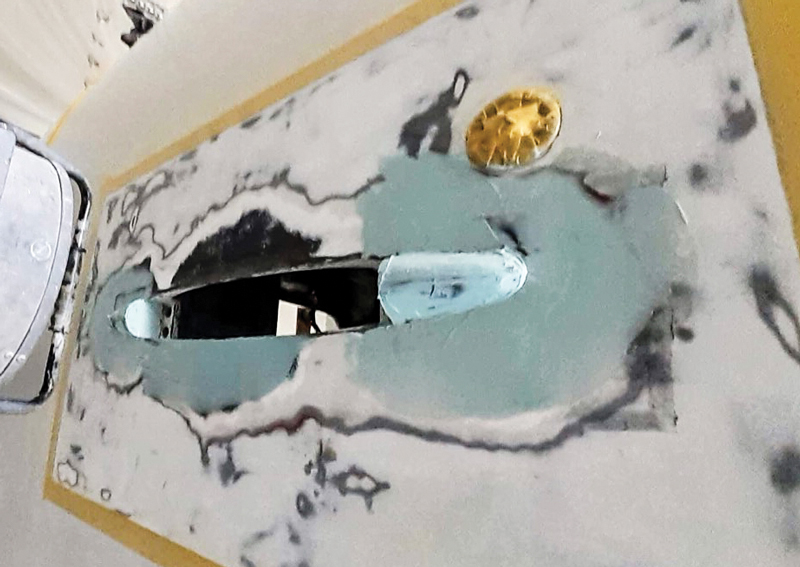 The reinforcement points forward and aft of the keel had delaminated after a previous repair.

Let me give a shout-out to Prépa Nautic, which sent one of its composite specialists to help with the most critical phase of the repair. This shipyard specializes in servicing racing boats and gives sailors access to its tools for repairs at the yard. They were exceptionally helpful and gave me great advice, but it helps to speak French, because most employees do not speak English.

Patching and Bagging the Problem

We first cut a patch of carbon fiber weave to size, applying epoxy to bond it in place. When mixing epoxy, always be aware of the specific ratios, and carefully read the instructions (see Professional BoatBuilder No. 194, “Mixing and Metering Epoxy,” page 54). The many different epoxies all have different mixing ratios, even within one company’s product line. For this repair, we applied an interface layer of West System 105 resin to the hull before adding two layers of carbon patches. The easiest way is to paint the resin onto the fabric that’s on top of a piece of plastic film and then press the wetted fabric into the interface layer of resin on the boat. This removed most bubbles and prevented me from applying too much resin.

The final stage was vacuum-bagging, so we first applied a sticky mastic tape and a vacuum bag connected via a small hose to a pump that provides suction, producing negative pressure in the bag to press the carbon patch down while also removing all the air bubbles, including those you might not see. That is critical, because air bubbles in a carbon repair weaken the entire structure when the resin cures, and potentially leads to failure—not a comforting thought, especially in a keel. 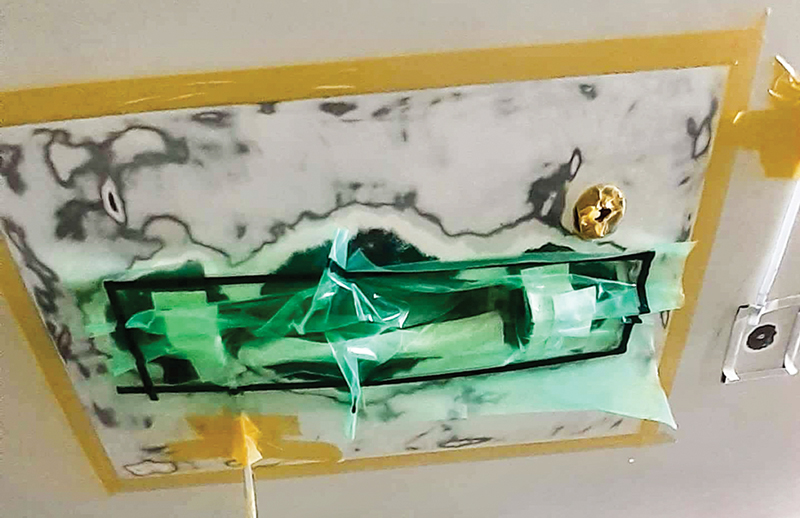 In the last step, the new carbonpatch was vacuum-bagged to the hull.

Depending on the climate, a heater can be an important tool to allow for a better cure, which is what we did. After the repair, a quick sanding and an alcohol wipe-down, it was time to spray-prime the repaired area. For such a small area this job took only about an hour, followed by a day for drying before the International Ultra 300 Hard Antifouling bottom paint could go on. Then it was finally time to mount the canting keel. 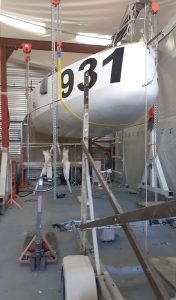 Alisia 931 is suspended
from straps and raised and lowered manually
with chains.

There is a cylindrical metal part, aka canting strut, that slots into two joints that bolt into the bottom of the boat. This gives the keel its canting capability. To prevent corrosion, the insert got a dollop of automotive grease. Winch grease will also work. The boat was suspended on a machine that resembled a Travelift, but instead of hydraulics, we were pulling chain hoists on either side to raise and lower the boat. Once we positioned Alisia 931 exactly above the keel, she was slowly lowered. When her keelbolts protruded far enough through the attachment plate and the nuts were tightened, the boat was ready to be launched.

Solo sailing campaigns are anything but a solo effort. While the skippers might be alone on the boat during the race, they almost always require the help of other people, friends, family, other sailors, and/or contractors with a tricky job or machinery that requires more than one pair of hands to operate safely and efficiently. Prototype boats are notorious for having as much, if not more, work to be done on the hard as in the water.

This was my first taste, and I’ll have more to share as I move forward.