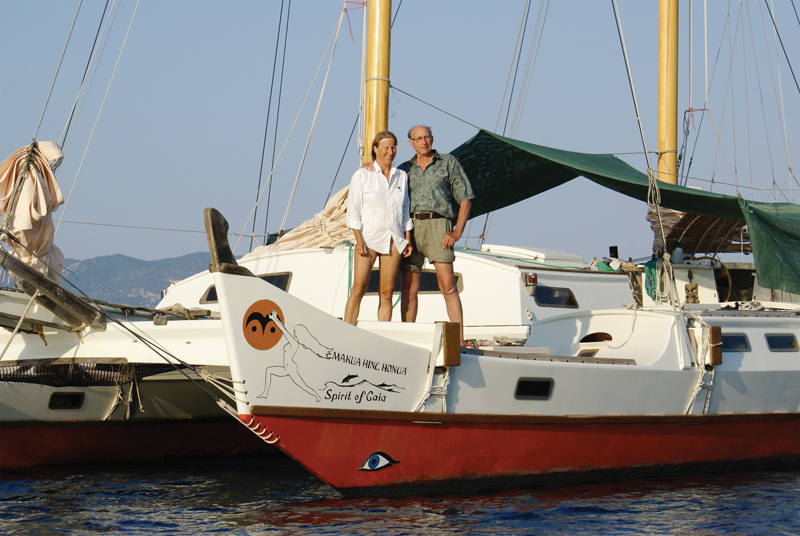 James Wharram and Hanneke Boon stand on the bow of the 62′ (18.9m) Spirit of Gaia. Boon had a hand in design
and took over their business, which still maintains a high brand visibility.

James Wharram, one of the last multihull pioneers from the postwar period, has embarked for the Great Perhaps. He died December 14, 2021, in Devoran, United Kingdom.

The early seafaring multihulls were considered to be yachting’s lunatic fringe. Now that they have gone mainstream, Wharram’s contribution to their ascendance is uniquely countercultural, and his life’s work deserves to be placed into some context.

In the decade from 1947 to ’57, two trail-blazing designers named Woody Brown and Rudy Choy, both in Hawaii, took inspiration from the ancient Pacific twin-hulled voyaging canoes. They combined that history with prewar wooden aircraft design and construction to produce several renegade yachts, which, by the mid-1950s, demonstrated their ability to make transoceanic passages so fast that traditional sailors were left incredulous.

Having come from a bit of Caribbean schooner bumming, I couldn’t believe it either, so I went to Hawaii, sailed with those men in those boats, and came away flummoxed. The speed was astounding, but the boats were too advanced for me. I desperately wanted a boat of my own for cruising, but the Hawaiian cats required advanced skills and serious money to build, and were intended mainly for zipping around. I was not focused on speed, but wanted a seagoing home that I could build myself.

By pure happenstance, I bumped into Arthur Piver in California. He was designing little trimarans for backyard builders. I hacked one out, sailed it on San Francisco Bay and as far out as the Golden Gate, and was enthralled by its seaworthiness. This was in 1957, and I heard that one James Wharram had already crossed the Atlantic in a super-simple, raftlike catamaran with, aside from him, an all-girl crew. I asked myself, why not a larger supersimple trimaran? Now I realize that if I had bumped into Wharram instead of Piver, I might not have gotten the nickname “Trimaran Jim.”

By the early 1960s, both Piver and Wharram were selling owner-builder’s plans for seafaring vessels. The clientele was largely neophyte, the boats often crude, and their handling lubberly. The nautical community was understandably derisive, but the more the multis were chastised, the more committed their adherents became. By the mid-1960s, new designers (myself among them)—and even some professional builders—were popping up worldwide. Some evidence of the multihull’s potential, in racing and voyaging, was coming to light. 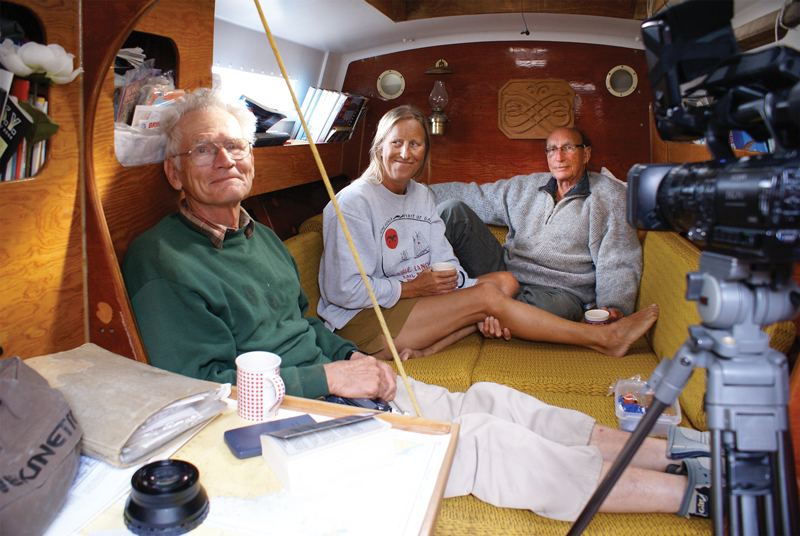 Author James Brown (left), an early trimaran pioneer, visited with Wharram and Boon in 2007 for a cruise in the Greek isles and to interview the couple on-camera for the OutRig project.

Wharram’s participation in this fitful progression was steady and formative. He identified his audience and spoke to them directly with promotional materials dappled with lots of sun, fun, and skin. While the multihull community at large was tending toward more sophistication and speed, and these boats were winning some important races, Wharram stayed focused on low cost and simplicity. His following and his business thrived, yet this success was not unique. The 1960s multihull phenomenon was in full swing, and I have often felt that those renegade boats, and their raucous proponents, were a product of their time.

There’s no making sense of the ’60s without pondering the counterculture, and while even the more yachtlike multis were found by traditional sailors to be either offensive or threatening or both, still their adherents reveled in their own sense of exclusiveness in being “yachting’s underdogs.” I believe it was that social stigma, that counter­cultural identity, that drove the early multihulls out of obscurity. Indeed, this rebellious aspect of human behavior seems now to explain much more than multihulls.

By the mid-1970s, it was time for the first World Multihull Symposium. Held in 1976 at a big convention hotel in Toronto, Canada, this supercharged event featured a panel of 10 designers from the U.S., Europe, and Down Under, and we addressed an audience of 300 devotees. We were all enthralled with the technical advances and seafaring achievements of modern multihulls. It was the first opportunity for many of us to meet, and of course, there was a lot of late-night “beach racing” in the hotel rooms, where many “trade secrets” were exchanged.

James Wharram and I hit it off, and on the morning of the second day, I was invited to join him and two of his then-five wives (they were openly polygamist) for an in-room breakfast. Their door was ajar when I arrived, and the three of them were sitting up in bed in their nighties. They all said, “Come on, get in!”

Trying not to reveal my reluctance, I stripped down to my undies and snuggled in beside a young Dutch siren who introduced herself as Hanneke Boon. Behold, here came room service. Jaws dropped, all laughed, and we spoke little of boats at that breakfast.

Years passed, and with Hanneke’s help we kept in touch, until one day I received a letter from James, saying, “Jim, I’ve had a rather difficult year. I was divorced by three wives at once.” They were all partners in their by-then booming plans business. One can only imagine the complications, but Hanneke survived the extrications.

I next saw the two of them together in 2007 when they invited me and Scott Brown (we are not related) to join them aboard their big catamaran, Spirit of Gaia, for a week’s cruise in the Greek Isles. Scott is a cinematographer from Toronto and the co-founder of our OutRig project to collect and preserve modern multihull history. Here was our chance to see the Wharrams in their true element, aboard the vessel in which they had recently circumnavigated. As we came aboard (it was James’s 85th birthday), he explained to us outright, “This is Hanneke’s boat. She’s the captain, and I’m only the admiral here.” 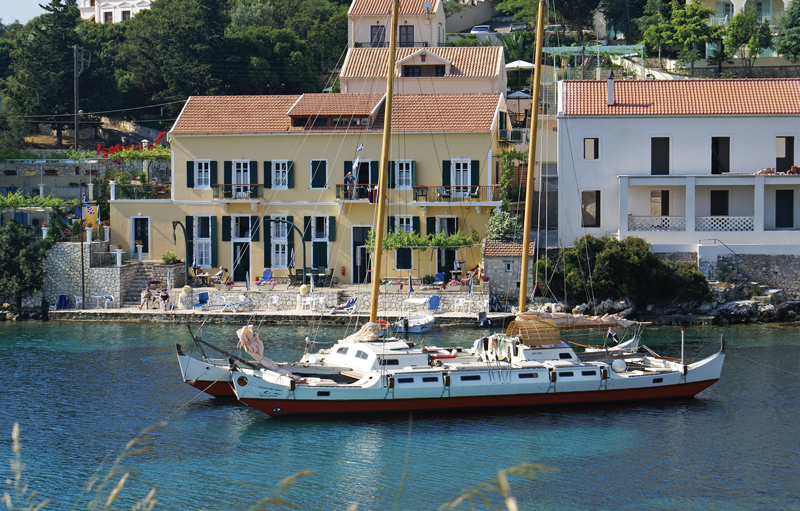 Spirit of Gaia, shown here on her mooring in Greece, is the largest Wharram design ever built. The wood-epoxy-construction was launched in 1992 for a circumnavigation and served as a cruising platform for Wharram’s later years.

Indeed, Hanneke took charge of the vessel, and as the cruise progressed, they sat with us for hours of on-camera interviews and exhibits. Soon it was apparent that Hanneke—with assistance from James’s first wife, Ruth—had for years also taken charge of their business. She had drawn the plans for all their later designs, produced their videos and publications, managed their promotions, and created their Web presence. A gifted pencil illustrator, she had portrayed their liberated “product personality,” which, while on board, they certainly personified. Looking back now on that idyllic cruise, I propose herewith that their 60-year-long endeavor be termed The Wharram/Boon Design Partnership.

The last time I saw James and Hanneke was in 2008 at Mystic Seaport, Connecticut, when WoodenBoat magazine hosted a big dinner in a big tent for “the multihull pioneers.” There we were, at the very seat of American nautical heritage, hosted by the most traditional fixture of the yachting press, no longer yachting’s underdogs. Of the several presentations, Wharram’s was by far the best. He delved into the ancient “raft-type” multihulls, from which he had taken inspiration for his designs, and concluded that, since 1957, some 10,000 clients had bought into his concept.

During his ovation, I remarked to Hanneke that her man had become quite the raconteur. She confessed that, in their global gatherings with Wharram devotees, James had probably given that spiel about 50 times.

Today, multihulls often dominate offshore racing, sometimes overpopulate the cruising harbors of the world, and apparently comprise the “up side” of the marine marketplace. This includes vessels that are custom and production built, recreational and commercial, power and sail. The smaller trailerable multis are popular as garage-size projects, but seafaring multihulls built by their owners are comparatively rare these days. Still, Wharram’s designs are emerging from backyards and boatyards all over the world. James leaves an armada of unique twin-hulled, raftlike watercraft in his wake. He has enticed many a landsman to hit the briny trail in search of adventure, self-discovery, and manhood. Hanneke, or Captain Boon, his sole surviving Mate, is well placed to perpetuate that legacy.