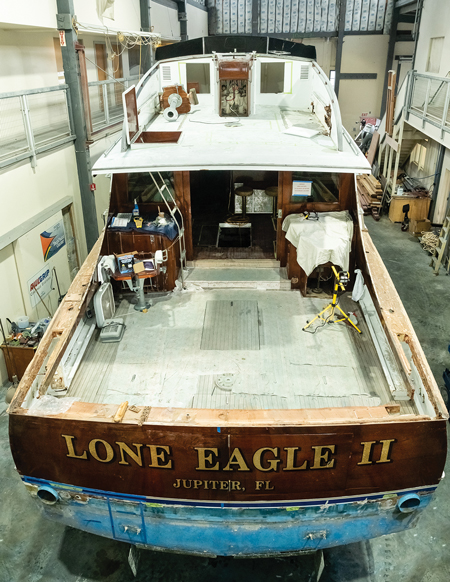 Lone Eagle II, a vintage1967 53′ Rybovich that was shipped from Florida, is shown at Sea Marine’s workshop in Point Hudson.

A Rybovich in the Pacific Northwest, where the water rarely warms beyond 55°F (13°C), is not a common sight, but that’s about to change. The large workshop of Sea Marine, in Point Hudson, Port Townsend, Washington, is currently home to a vintage specimen of the well-known Florida builder of sportfishing boats. The name Lone Eagle II and her former home port of Jupiter, Florida, were still splashed across her veneered transom in large, gold letters, when she arrived.

Designed by Tommy Rybovich, this 53-footer (16.15m) was built in 1967 for her first owner, who named her Little Pete. With Internet help, 55 years later the boat found new owners. Pat, 61, and Sara Shannon, 57, had been looking for a new ride since selling their Doug Zurn–designed Salish Sea 48, which they had built to market as a luxurious family cruising powerboat that blends traditional and contemporary design. But this idea was upended by the fallout from the 2008 financial crisis.

As owners of a boatyard, the Shannons are well positioned for their Rybovich refit. Since 2006 they have been partners in Sea Marine but only recently moved to Port Townsend from Portland, Oregon, after selling their food businesses, while their friends Chris and Sandy Bakken were managing Sea Marine. So the owners have a boat, a yard, and employees with the requisite skills. But business is going so strong that the work on Lone Eagle II has to wait for a lull in the schedule of ABYC-certified master craftsmen Bob McMurray (wood projects), Matt Gittings (glass work), and Clay Jones (mechanical and electrical). Fore more on the topic of Rybo refits, see also Rybovich Rebuild x 2, 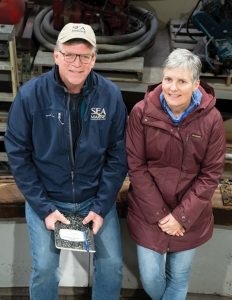 The boat is owned  by Pat and Sara Shannon, who also are partners in Sea Marine.

Why bring a warm-weather fishing boat to the Pacific Northwest? “I love Ryboviches” was Pat Shannon’s reply. “Love the lines, the history, the legacy. And the more I looked at regular Ryboviches, the more I thought, ‘Man, that would be a beautiful boat to own.’” Although well cared for and popular as a party boat at the Rybovich Rendezvous, Lone Eagle II suffered from hurricane damage and had fallen into neglect, which became obvious when Pat and his son went to Florida to get her shipped. “We took her from the New River down to the ship at Fort Lauderdale, which was a harrowing experience. The gears didn’t work very well, and the steering was [stiff]. It was like you had to have a crank to get the rudders to turn.

But the engines, two 550-hp 6-92 TA Detroit Diesels from the mid-1980s that had been rebuilt around 2012, were still humming. Shannon says he likes the sound of these vintage power plants, so he’s reluctant to consider repowering with new engines, which would be more fuel-efficient but also increase the project’s carbon footprint by the emissions from manufacture and shipment.

Lone Eagle’s cold-molded hull was built with three layers of 4 1⁄2“ x 1⁄4“ (114mm x 6mm) planks of Philippine mahogany covered with three layers of glass. The hull shape was altered early on by replacing the round chines with hard ones that were bumped out slightly to facilitate easier planing and to help with stability when backing down on large fish hauled aboard through the tuna door on the stern. 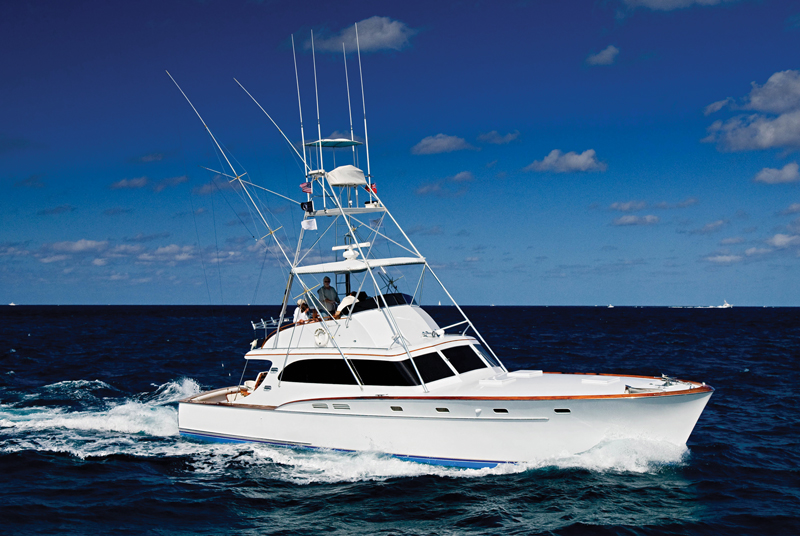 Originally named Little Pete, this 53′ (16.15m) sportfishing model, shown under way in Florida waters, underwent several refits and changes including adding hard chines for stability and at some point the removal of saloon windows.

Little Pete was the first boat to undergo this modification, which eventually became standard on all later Ryboviches. However, portions of these hard chines were damaged from the pressure of Travelift straps. Sea Marine rebuilt them using 1⁄2“ (13mm) Hydrotek mahogany marine plywood fastened and epoxied to ribs 10“ (254mm) on center, much closer than the original ribs, placed 18“ (457mm) apart. Over the Hydrotek ply the yard added two layers of 1-oz/sq-yd (33.91-g/m²) fiberglass cloth and one layer of 7.5-oz/sq-yd (254.29-g/m²) cloth epoxied with WEST System 105 epoxy resin and 206 hardener.

Shannon also showed me some of the 25 through-hull penetrations scattered along the hull sides and the bottom that were closed with thickened-epoxy-covered 3⁄4“ (18mm) Hydrotek mahogany marine ply plugs, which were then triple-fiberglass-layered to the hull, either to reduce their number, or after relocating them. Also on the task list is the transom, portions of which are being removed from the top down to repair the framing. It will be rebuilt in 3⁄4“ (18mm) Hydrotek mahogany marine ply overlayed with 1⁄4“ (6mm) mahogany planks and 1⁄4“ marine teak veneer. The transom also will be glassed with 7.5-oz cloth and WEST System 105 resin and 207 clear hardener with UV protectant before a finish of several coats of varnish. 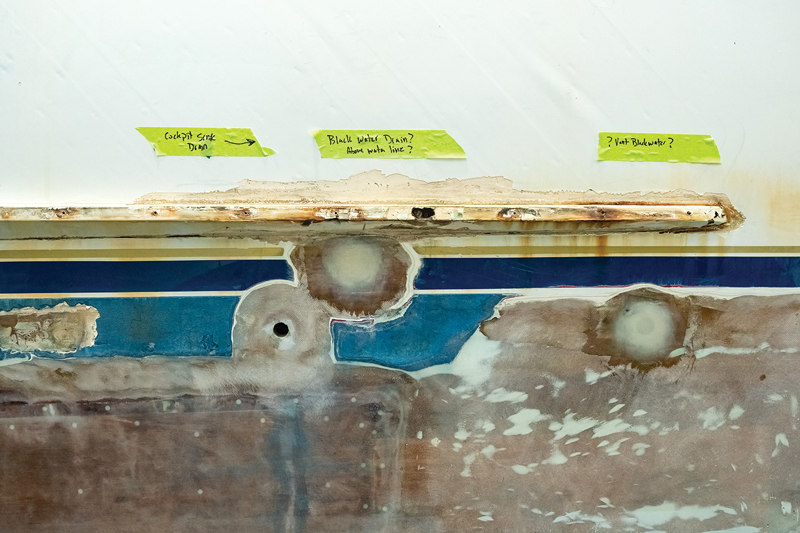 In the woodshop, Shannon showed me a stack of milled 5“ x 3⁄8“ (127mm x 10mm) clear Douglas-fir planks from local supplier Edensaw for the foredeck repair. Ultimately, Sea Marine will replace the existing deck with three transverse layers of those fir planks, glassed over to the toerails with 7.5-oz cloth and WEST System 105 resin and 206 hardener. In the process, they also will repair deck framing with mahogany ribs to match existing wood.

At the time of my visit, the exterior lower keel, which had signs of worm damage, had been removed. A new one will be made from layers of 1 1⁄2“ (38mm) purpleheart sourced from the nearby Northwest Maritime Center. The first layer will be bonded to the hull with 3M Marine Adhesive Sealant 5200, while all subsequent scarfed layers will be epoxied and affixed to the previous layer. The completed exterior lower keel will be bolted through the interior keel with 20 1⁄2“ (521mm) silicon-bronze bolts drilled from the inside. That structure will be glassed with three layers of 7.5-oz cloth and epoxy. Finally, a 1 1⁄2“ purpleheart sacrificial worm shoe will be added. 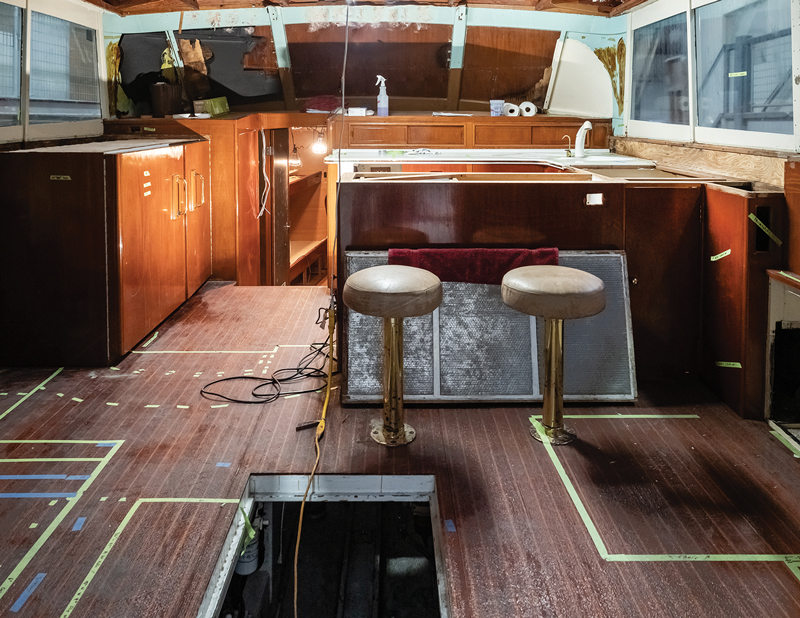 The Shannons’ update of the saloon will resemble the original configuration with more seating space. They’ll also reinstall windows to restore daylight.

The boat’s new owners plan to install “modern and efficient equipment and systems while restoring the original historic style and character of the vessel,” as the briefing said, but they also must ready the vessel for operation in higher latitudes. They intend to remove a large, bulky freezer unit from the port side of the saloon. And Sara said she wants the U-shaped galley and a bar returned to their original configuration, which would open up the seating section.

The crew had already removed unsightly above-counter storage cabinets installed by a previous owner, who also sacrificed the large saloon windows and 360° view for plywood sheets and a dungeon-like atmosphere. The Shannons intend to put saloon windows back in. Lone Eagle II was stripped of most equipment, old wallpaper, and “miles of wiring and plumbing” that will be replaced. The living quarters below deck will be kept intact, save for some contemporary interior design touches. 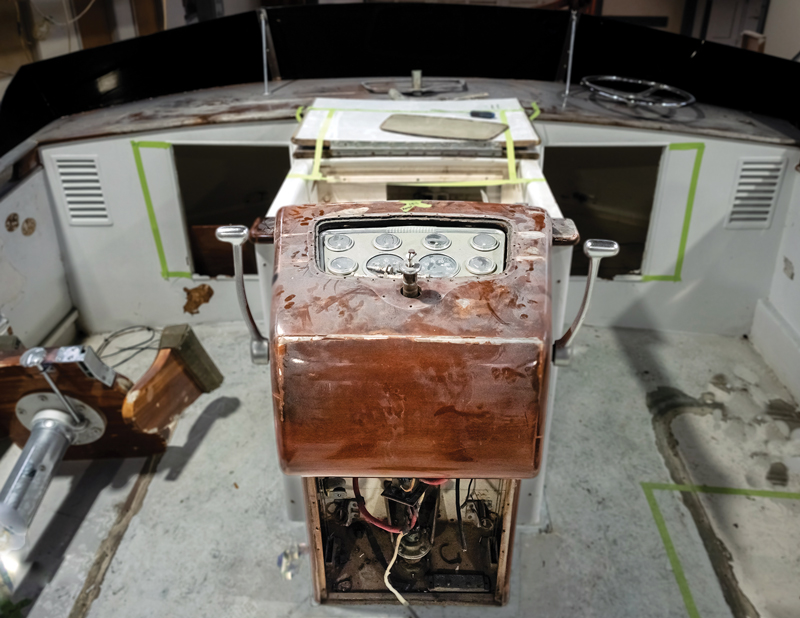 The elegant mahogany steering console with its analog instruments on the flying bridge will be moved farther forward for better visibility from the helm.

Lone Eagle lacks an inside helm station that would be helpful when running through the Inside Passage in inclement weather. She was designed to run in 80°F (27°C) weather, with a mahogany steering console on the flying bridge positioned aft to facilitate communication between the operator and anglers on the aft deck. Game fishing isn’t in the Shannons’ plans, but they want to keep the console and its vintage analog instruments. To improve visibility for the driver, the helm station will be moved forward. They also don’t need a tuna tower but will install a new hardtop over the flying bridge and add canvas enclosures, made by the yard’s canvas department in the old Hasse sail loft down the street.

Do they have a date for the relaunching party? “Ha, ha” was Pat’s answer.

“Originally, I had hoped that we would get it to a point where we could use it a little bit this summer. It won’t be finished, but I would say by summer of 2023, she’s going to be in great shape.”