Students at the Swiss Federal Institute of Technology, working with the SP80 company, hope to advance the world sailing speed record to 80 knots.

It’s refreshing just looking at the team photo with more than three-dozen students at the Swiss Federal Institute of Technology (EPFL) in Lausanne taking a break from their ambitious high-tech project to smile for the camera. Their declared goal is designing and building a craft capable of pushing to 80 kts (148 kmh/92 mph) the 500-meter (547-yd) world sailing speed record—set in 2012 by Vestas Sailrocket 2 and still standing at 65.45 kts.

Their weapon is a small and slippery-looking trimaran that was still taking shape at press time. According to the most recent specs, it is 10m (32.8‘) long and weighs 800 kg (1,764 lbs), has two crew in a forward cockpit under a canopy, and is powered by a kite. Under the guiding rules of the World Sailing Speed Record Council, no hydraulics, electronics, or energy storage are permitted on boat, foil, or kite control, which drives all key design decisions. The intriguing part of this project is the team’s choice of a hyperventilated foil that also provides side force and directional stability but won’t elevate the vessel much above the water’s surface. 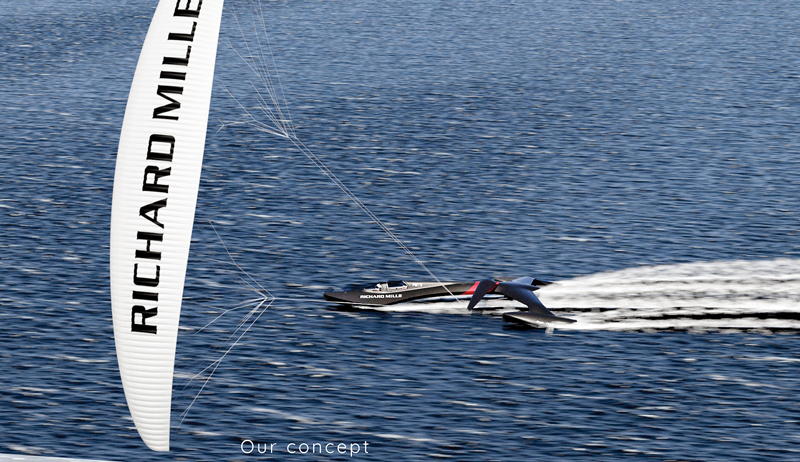 Betting on hyperventilating foil technology and kite power, SP80 looks to make many incremental improvements in aerodynamics and hydrodynamics.

Designing hydrofoils for speeds of 50 and 80 knots has been fraught with hydrodynamic challenges, as an article in the newsletter of the Society of Naval Architects and Marine Engineers (SNAME) explained: “These problems stem from two sources, cavitation and the free-water surface, complicated by the action of waves. Recently, a natural air venting phenomenon has been investigated which shows promise of being a very satisfactory mode for the operation of high-speed hydrofoils up to speeds at least as high as 80 knots. ‘Hyperventilation’ is the complete breaking open to the atmosphere of a vapor or partially air-filled cavity, giving rise to an underwater planing condition. What was previously thought of as a transient, extremely shallow submergence phenomenon has been shown to be a stable and predictable operating condition with a wide ‘window’ encompassing speed, depth, angle of attack, foil section, and planform geometry.”

The idea to look into these types of foils, which are still not well understood, came when Benoît Gaudio—one of the team’s three co-founders and the designated pilot of the record attempt—tried superventilated fins on a kiteboard. “I had a real feeling of stability at high speeds,” Gaudio was quoted in the press materials. “We reached more than 40 knots without struggling to accelerate or stay on the board. We knew then that there was something to dig on that side.”

Aided by fellow co-founders Xavier Lepercq, the technical manager, and project manager Mayeul van den Broek, he started their research. Soon after the project was officially launched in October 2019, they turned to Professor Mohamed Farhat from the Laboratory of Hydraulic Machines at EPFL, a renowned specialist in cavitation, for input. At Farhat’s lab, a cavitation tunnel is capable of producing water flow at speeds of more than 50 m/s (180 kmh/112 mph). The tunnel was used to tweak the foils of the famous foiling trimaran l’Hydroptère, which served as inspiration for the SP80 project. 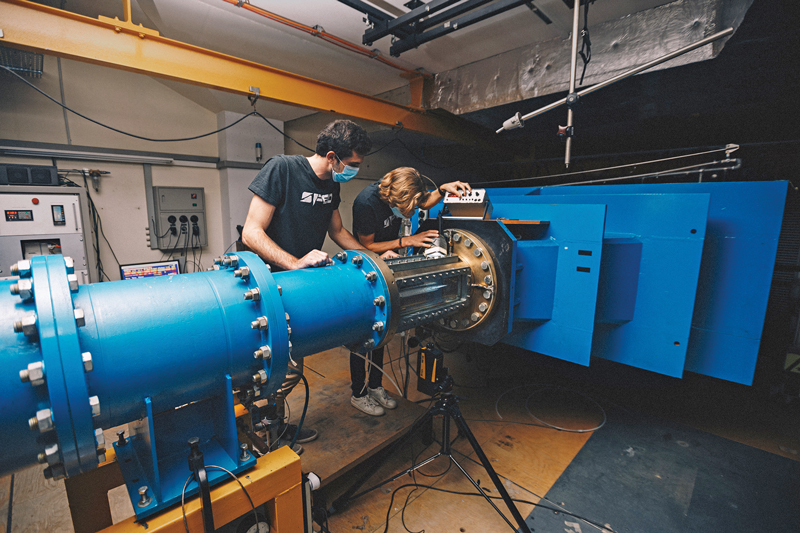 Students contribute their time and skills to research in the cavitation tunnel, which produces high-velocity water flow.

Here’s a 10-second primer on cavitation tunnels: A powerful pump puts water in motion in a closed-loop circuit, forcing it into a narrowing section where the water accelerates, a process that simulates a vessel traveling at high velocity. At the same time, it is imperative to control pressure inside the tunnel “to facilitate the apparition of cavitation or ventilation,” as the team explains on the website.

For all its complexity, a cavitation tunnel does not give researchers the control needed to model the water’s surface that interacts with foils. Understanding this process well is essential for designing and building a superventilating foil that has to work well on many levels, e.g., minimizing ventilation and cavitation, which negatively impact performance. The foil has to be self-adjusting because the rules don’t allow active controls. It also must produce as little drag as possible while providing enough directional stability and side force to keep the vessel going in a straight line at top speed. Thus the researchers decamped Lausanne for Bern, the Swiss capital, where they ran 40 tests in a 142m (155-yd) towing tank to compare the fins on Gaudio’s board with prototype foils on a scale model they had tow-tested on open water the previous summer.

Assessing foil designs while tow-testing a scale-model on Lake Geneva.

The team said it will use different kites ranging from 20m² to 50m² (215 sq ft to 538 sq ft) for a range of conditions. Small-diameter and low-stretch Dyneema lines and bridles will connect the kite via pulleys and levers to the boat and to the controls in the cockpit.

To keep track of loads and performance, the team installed sensors and electronic modules all around the boat to collect this information for transmission to the shore base or to coach boats (SP80 also plans to put sensors on the pilot’s body to monitor biometric data). It is a special field of expertise for which SP80 gets support from Fischer Connectors, a company specializing in miniature connectors for high-speed-data acquisition and transmission.

Asked about the design already taking more than 40,000 hours, head of communications Laura Manon said, “We are using dynamic simulators for the boat and the kite. We’ve been developing in-house tools to predict hydrofoil performance faster with machine learning and AI. Predicting the hydrodynamic performance of such complex foils in a millisecond is a nice feature.” She also mentioned that the team is getting help from Neural Concept, one of more than 30 corporate and scientific partners supporting this effort.

We got some details of the high-end construction techniques employed by the Italian Persico yard, where the boat is being built. Persico uses TPT Carbon, an ultrathin UD prepreg supplied by North Thin Ply Technology, another technology partner. The noncrimp fabric is laminated by an automated tape lay-down machine on a 2D table. The fabric is then cut to specific shapes for draping into the molds. In some spots the company still uses woven 200-g/m² (5.9-oz/sq-yd) prepreg. For wet layups during relamination, the choice is classic 400-g/m² (11.8-oz/sq-yd) biax, with 200- g/m² 0/90 twill for the finish. Areas affected by slamming and those under the bulkheads and fairings are laid up with solid laminates, while decks are a sandwich with Gurit Corecell M100/M80, 15mm–30mm thick. Persico uses autoclaved prepregs for the main hull, side floats, and bulkheads as long as the parts fit inside the oven, otherwise out-of-autoclave production (e.g., for some portions of the hull and crossbeams), while nonstructural fairings are infused.

The boat’s final assembly is planned for autumn 2022, with launching on “Swiss water” by the end of the year. The schedule calls for sea trials in southern France in 2023, and then the team is off to Walvis Bay in Namibia or some other windy but protected shallow-water venue for the first record attempts in the summer of 2023.

To follow young people engaged in advanced boatbuilding projects that employ scientific inquiry and use state-of-the-art tools, techniques, and materials, or if you wonder how much longer the old Vestas II speed sailing world record can survive, bookmark this undertaking in your Internet browser.