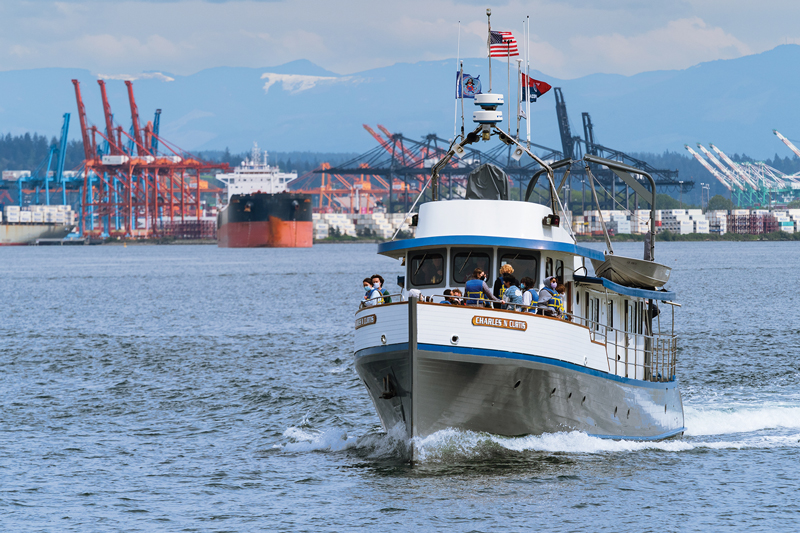 Charles N Curtis in her current configuration as a training vessel takes high school students on a field trip on Commencement Bay in Tacoma, Washington.

Once the years tick past 90, it’s time to hang it up, especially for working boats like the Sea Scout Ship 110 Charles N Curtis. She has been working as a youth training vessel since 1946 after being acquired for $10 by the Mount Rainier Council (now Pacific Harbor Council) of the Boy Scouts of America and bearing the name of the Scout Executive of the day. Despite her near-biblical age, the gray-hulled boat, homeported in Tacoma, Washington, still is in fine trim, running up to 180 trips per year for the Sea Scouts and students from local schools. The Curtis logs impressive mileage, making it a familiar sight at maritime events like Seattle’s Opening Day Parade, the Marine Daffodil Parade, and lighted boat parades around Christmas.

The former United States Coast Guard Patrol Boat CG 402 (later CG 78302) is 78‘ (23.77m) in overall length with a 14‘8“ (4.5m) beam. She was one of six vessels of the 400 Series purpose-built from yellow pine on oak in 1931 by Southern Shipyard in Newport News, Virginia, to chase rumrunners on Chesapeake Bay and Long Island Sound. Being outrun by speedy and nimble rummies, the Coast Guard needed fast and maneuverable craft to replace the lumbering destroyers (aka six-bitters), which topped out at 12 knots and could not enter shallow waters. The 400 Series was equipped with two Viking II 8-cylinder gasoline engines producing 1,130 shaft horsepower and a top speed of 24 knots. “If [the bootleggers] still were too fast, the cannon would catch up with them,” said Tom Rogers, the Curtis’s senior skipper, who has known the boat for about six decades. After Prohibition was repealed, these six patrol boats were transferred to the West Coast in 1937, where CG 78302 was assigned to Tacoma. Armed with a 50-caliber machine gun aft and a 1-pounder forward, plus two depth-charge racks, she served as an offshore patrol boat between Port Angeles, Washington, and the Columbia River in World War II before being surplused and sold to the Boy Scouts.

A drawing shows the original arrangement of the vessel that was built at Southern Shipyard in Newport News, VA, during Prohibition with the explicit purpose of chasing rumrunners.

“She was built for a service life of 10 years, but now she’s past 90,” Rogers said. “She’s considered the longest-serving Scout Vessel in the U.S. and still serves many needs, including maritime training, school science cruises, and community service.” She had to be adapted to her mission as a training vessel that can sleep up to 26 officers and crew for overnight trips. Alterations include the deck-level aft galley added in the late 1950s, raised bulwarks for safety, a new and bigger wheelhouse, also raised and moved forward for better visibility.

The old gas engines were donated to the Tacoma’s Fireboat No. 1 and replaced by two GMC 6-71 diesels producing 235 shaft horsepower to propel the Curtis to 12 knots. These power plants date back to the 1940s and were rebuilt multiple times, but spares are increasingly difficult to find. Besides, the engines are not Tier IV–compliant, which is becoming an issue. Electric house loads are covered by two gen­­s­ets with a capacity of 20 kW and 30 kW of 208V three-phase power. Tankage includes 1,200 gal (4,542.5 l) of fuel and 500 gal (1,892.7 l) of fresh water. “Over the years, water and fuel tanks were replaced, quarters remodeled, bulkheads, planks, frames, floorings, rubrails replaced, and much more,” Rogers said. “We are on the fourth generation of engines. There is more to be done, but the cost will become prohibitive.” 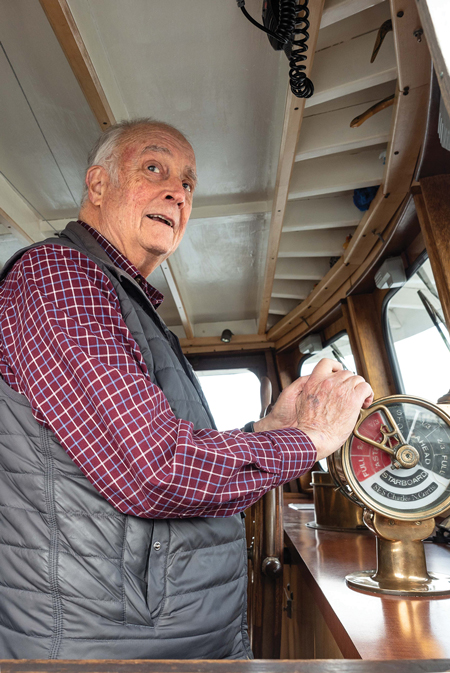 Senior Skipper Tom Rogers works the throttles. He also manages the organization that supports the vessel and its educational programs

On a recent visit to the Curtis, docked near the 11th Street Bridge on the north shore of the Foss Waterway across from downtown Tacoma, Rogers gave me a walkthrough of the boat. It appeared in good condition, with an eclectic mix of traditional gear and modern equipment that isn’t the latest technology but is eminently suited to teaching novices the basics of navigation and vessel management while under way. Standing out are the vintage bronze throttles, which Rogers still mans during docking maneuvers. “There’s nothing easy on this boat,” he said. “There are no thrusters, so you have to learn to work with the engines.”

Having joined the Sea Scouts in 1964 and skippered the Curtis since 1979, he knows the organization and the boat. “She’s been well cared for with annual haulouts to maintain her status as a Subchapter T [Small Passenger Vessel], but she is approaching the end of her useful life,” he said. Regular annual maintenance runs between $30,000 and $50,000, depending on the work, while operating costs (e.g., fuel, provisions) add a similar amount, not counting the 20,000 hours of service contributed annually by volunteers.

In 1998 Rogers retired from Tempress, a manufacturer of marine, aftermarket, and OEM products, to volunteer his time for the cause, which includes running Commencement Bay Marine Services, a full-service yard with fuel dock that shares the two-acre (0.81 hectare) premises on the Foss Waterway with the Tacoma Youth Marine Center, the home of the local Sea Scout base. Proceeds from the yard’s business support the Youth Marine Foundation, which supplies the infra­structure and dock space for the Curtis and another aging Sea Scout boat, the Sparkman & Stephens–designed 88‘ (26.82m) yawl Odyssey, launched in 1938 for a Vanderbilt descendant.

While Odyssey needs serious fundraising for a new mainmast, the Curtis is already awaiting her replacement, a 110‘ aluminum vessel bought for $1.5 million and about to be shipped to Tacoma from Houston, Texas. Built for fishing in 1977, it was converted to a training boat, so it is a good fit for the Sea Scouts’ programs. The Curtis and the new boat will run in parallel for a while until the venerable old patrol boat’s decommissioning. It’s a prudent decision based on an independent evaluation that pegged the cost at approximately $500,000 to extend her service life, Rogers said. Among other work, she’d need two new 5“ x 12“ x 8‘ (12.7cm x 30.48cm x 2.44m) oak shaftlogs, several frames and floorings, demanding the removal of the toerail and covering board on the main deck for access. The bulkhead between the engineroom and tank room needs repairs too, requiring the removal of more equipment.

In the past, the vessel was taken to Port Townsend for regular haulouts, and refit jobs at Scow Bay Boats to pass Coast Guard inspections. Shop owner Mark Stout, who worked on the Curtis for the past several years, replaced bulkheads and some of the old pine planks with fir, and installed a false stem and new backing plates for one of the prop struts. “She needs work to keep the Coast Guard happy,” Stout said. “But not all of it needs to be done at once. The Curtis has good maintenance procedures, so [the jobs] can be spread.” 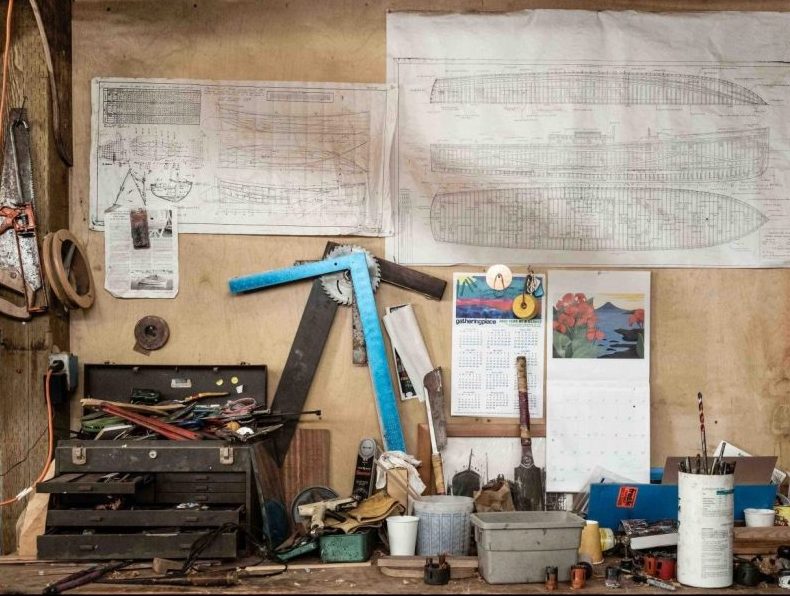 The workshop at Scow Bay Boatworks in Port Townsend, Wash., where the vessel was hauled out in the past several years for annual maintenance, with a construction drawing on display above the workbench.

With a replacement on the horizon, what’s a sensible retirement plan? Preserving her as a waterfront attraction, like Tacoma Fireboat No. 1, propped up on the hard by Duke’s Seafood, would cost as much as refitting her. There is not enough salvage value in the boat to hope for a big payday, and selling her as a restoration project or as a liveaboard platform to raise funds for the Boy Scouts’ Pacific Harbor Council does not look promising either. The boat needs at least six crew for operation, a deterrent for potential buyers. And legally required insurance would be expensive, if it can even be obtained for a wooden pre-World War II boat. Rogers also thinks that by state law, the Boy Scouts could be on the hook for proper disposal if a subsequent owner abandoned or wrecked the boat in Washington State.

He suggested quietly disposing of the Curtis “in an environmentally correct way and without negative public awareness,” and implied that Ship 110 as the continuing operating entity could raise funds from private and institutional donors to break her up after removing memorabilia and items of limited monetary value but historical significance, e.g., the helm and throttle.

While details still have to be worked out, it appears that the ship that chased rumrunners in the 1930s, guarded the West Coast against Japanese attacks during WWII, and then helped educate thousands of youth and young adults, many of whom went on to work in nautical professions, might meet her fate after 91 years.