An early RaceBird prototype is shown during on-the-water trials. These electric fixed-foil boats will compete in the E1 Racing Series at a top speed of 50 knots.

Powerboat racing on foils and electricity is not new, as the annual Energy Boat Challenge in Monte Carlo has proven since 2014. But as the goal of getting the most speed out of the least energy is replaced with muscularity and high velocity, it is bound to morph into a spectator sport on protected bodies of water in densely populated cities like London, Venice, Amsterdam, and Paris. A new racing series called the UIM E1 World Championship has the blessing of the sport’s governing body, Union Internationale Motonautique, and will be contested on one-design foiling boats called RaceBirds, supposedly reaching a top speed of 50 knots powered by a custom-designed 150-kW (201-hp) Mercury electric outboard and a lithium-ion battery from Kreisel. RaceBirds won’t be fitted with active ride controls, at least not initially.

“While most raceboats are developed as an improvement from previous designs and within well-established rules, the RaceBird needed a fully disruptive approach,” Brunello Acampora explained the carte blanche strategy. “It had to be a 100% electric, safe, and sustainable one-design high-tech racing foiler, capable of being shipped around the world in a standard container.” Acampora’s firm, Victory Marine in Naples, Italy, is contributing naval architecture and engineering services, while the boat itself is based on a design by the Norwegian Sophi Horne, who was quoted as having drawn inspiration from birds flying over water, electric cars, and Formula E automotive racing. 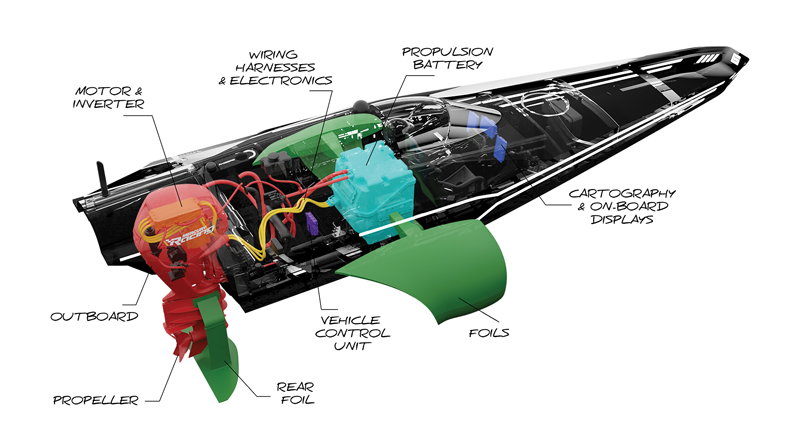 The general configuration shows the driver’s seat forward of the battery, installed near the center of gravity between the main foils. These foils’ angle of attack is adjustable, albeit not while under way.

“The novel foiling configuration, with two secant wings and an aft elevator, was conceived for the purposes of maneuverability, agility, and acceleration, which guarantee close racing and [excitement] for public viewing,” Acampora said. “The pilots must showcase their ‘flying skills,’ as there’s no automatic ride control system. The wings act as ride height controllers at different speeds, and the elevator’s trim does the rest of the job. The idea is to maximize the pilot’s…engagement, with the need to develop new driving techniques, making this one-design sport truly meritocratic.”

From the U.S. perspective, the involvement of Mercury Racing has some significance as it heralds the dawning of the electric age for the marine propulsion company, even though jumping into a racing series at this stage is a departure from the playbook that calls for starting at the lower end of the power range and working upward. With a strong background in auto racing, E1 reached out for help with integration and marine market expertise. “High voltage, high power density, high discharge rate automotive style, and powertrains—that’s really their sweet spot,” said Jeff Broman, the project’s director of engineering. “They needed a partner in the marine industry to help integrate their powertrain concept into a boat.” Equally important to Mercury Racing was a chance to work with other technology partners such as Kreisel, an Austrian battery manufacturer that has high-end automotive and marine applications to its credit (see “a = F/m,” Professional BoatBuilder No. 180). 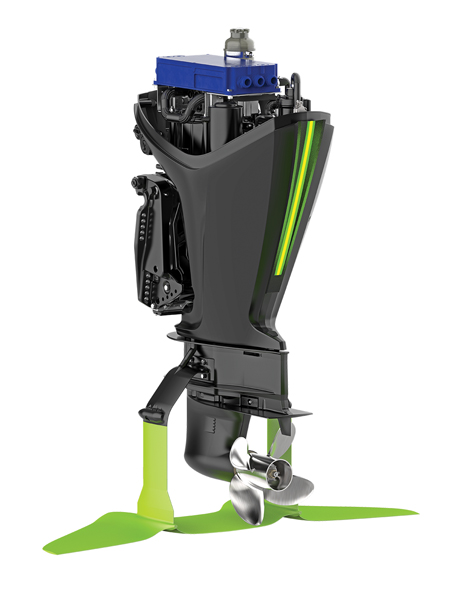 Mercury Racing supplies the 150-kW electric outboard in the adapted
housing of a 115-hp four-stroke model with added foils.

Mercury Racing, Broman said, was following E1’s specifications for top speed, powertrain components, and boat design before selecting a “donor platform” that best fit the application—in this case, the 115-hp four-stroke outboard, from which they removed the combustion engine to repackage it with electric components. “We’ve got a motor, we’ve got an inverter, there’s a seawater pump to get cooling water up to the outboard,” Broman said. However, unlike a combustion motor, a second cooling circuit was needed for Kreisel’s custom 72-Ah Li-ion battery, which offers 150 kW peak and 100 kW continuous power, has a net weight of 236 kg (520 lbs), and comprises 3,312 cells with the 18650-form factor. These round cells are popular for electronics car- and boat-propulsion batteries (see “Electric Startup,” PBB No. 185). Kreisel said the custom work included immersion cooling to ensure peak performance, carbon housing, motorsport module design, and integrated safety devices for marine operation.

In terms of prop design, Broman said he gave E1 half-a-dozen propellers he considered suitable for the desired speed range. “In initial testing, we’re running basically a production Spitfire prop, a four-blade stainless-steel propeller that’s used on consumer outboards…and then use that as a starting point to further develop.” His focus, he intimated, was “on the systems and parts Mercury Racing was responsible for”—the specifications for the cooling system design, and the drive system, making sure all were operating within the required parameters. “As far as the overall vessel, the team was very focused on balance, hydrodynamics, stability, and top speed, slowly incrementing that up, getting the position of the foils set for that balance of speed and stability.” 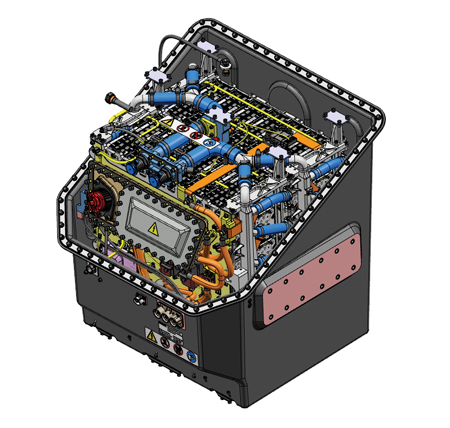 As Acampora hinted earlier, without active ride control, the motor becomes RaceBird’s most important trim tool, with steering and tilt angle (power trim) plus an electric lift to control height. Mercury Racing designed and fabricated the critical piece—a small horizontal foil mounted below the drive gear case. “It sits nice and low, which keeps it in clean water,” Broman said. “Part of the design challenge was figuring out how to structurally tie it back [to the motor]. During initial testing, we were seeing good slip numbers of the prop, which seems to indicate that we’re running in clean water.”

Asked about the acceptable range of racing conditions, Acampora said, “Wave height for safe operation is currently considered to be a short chop between 0.3 to 0.5m [1‘ and 1.6‘], depending on speed. Initial trials on a long swell did prove that the configuration is capable of becoming airborne and reentering the water in a safe and stable fashion.” Promotional videos posted online were taken in glassy conditions and show the boat popping up on the foils quickly during acceleration and making speedy turns around course marks with moderate positive heel.

While the E1 Series is still in the prototype test phase and its media department is getting traction with mainstream outlets such as GQ and CNN, we’d have liked to hear from Sophi Horne, who started the design company SeaBird Technologies and made the leap into yacht design for this project. Or about construction materials and procedures for hull and foils, safety features that prevent Li-ion battery fires, cost per boat, length of racing courses, and projected runtime on a battery charge.

For technology partners, E1 can be a useful stage if organizers get the boats right, manage to attract enough squads with talented drivers (the goal is 12 teams; and one from Venice, Italy, has officially signed up thus far). If they also bring out crowds that enjoy speed without earsplitting noise and the fumes of high-octane gasoline, the UIM E1 World Championship series could become the hot new ticket of powerboat racing; COVID reruns, armed conflicts, and lurking recessions be damned.

Mercury Racing’s efforts also could be a boon for the whole company as it catches up to the first movers in the field of electric vessel propulsion, especially on the old continent. Said Broman: “Electrification obviously is coming to the marine industry. We all know that. [While] I think it’s not the right technology for every purpose, there are certainly some applications where it’s working well, especially in Europe, with more bodies of water where internal-combustion engines are restricted or even banned altogether.”

The name of the company that developed the electric outboard is Mercury Racing, not Mercury, as the original story stated. We regret the error and changed the text and hyperlink accordingly. Ed.