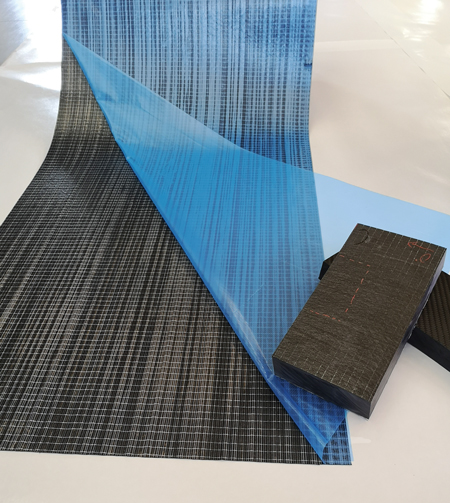 “G-Vent provides a faster and more cost-effective manufacturing route for large marine structures with absolutely no compromise in mechanical performance,” read a quote by Tom James, Hexcel’s business development manager, who has a background as a naval architect and marine structural engineer. Reached in his U.K. office, he said, “My concern was that people would think that introducing a grid into the material would create imperfections, primarily void, within the laminate that would be seen as a quality issue and the features that are detrimental to the mechanical properties.”

We asked Q.I. founder Stefano Beltrando about his observations when testing these monolithic panels made with a 600-g/m² (17.7-oz/sq-yd) unidirectional carbon prepreg and Hexcel’s M9.6 resin system. “They haven’t confirmed the exact fiber but told me it’s a ‘standard-modulus high-strength fiber,’” he wrote in an e-mail. “We did a resin burn-off test on the samples, [and] G-Vent fiber content by weight was 68–69% for the non-debulked vac bag and oven-cured panels, which is totally in line with an autoclaved standard prepreg solution. Hexcel said they could go slightly lower in resin content if required, but their focus for now is on industrialized thick laminates rather than absolute weight savings.”

Beltrando did not issue mechanical results, as Hexcel was to look purely at NDT testing—laminate quality and void content. However, the manufacturer produced its own set of data for comparison, which are posted below. The weight of the grids used is within the range of 2 – 6 gsm. Hexcel added the densities and values for the normalized mechanic data for a better comparison to the table. The company maintains that the advantage of Hexcel G-Vent is the grid’s light weight which could increase the laminate quality in terms of voids/porosity, therefore producing better mechanics, especially in thicker laminates.

“From our side we were very interested to look at the G-Vent panels because of our work with foils,” Beltrando added. “Hexcel included a curve in the test panels so we could see how the material was working in a nonflat test panel. Ultimately, we can see G-Vent having some major advantages in any thick-section prepreg parts—so, foils, masts, booms, rudderstocks, etc.—potential applications in raceboats and superyachts.”

About its compatibility, James said Hexcel G-Vent is proven to work with E-glass and with the company’s resin or prepreg resin systems. “The important thing is to understand that it is an integrated product. It’s not a separate layer that you need to apply to the laminate. It’s part of your layup,” he said. If builders produce very thick laminates at lower cure temperatures of around 80°C or 85°C (176°F or 185°F), he recommended using the M79 resin, a low-temperature-curing epoxy for prepregs, or M81 (up to 180°C/356°F) for thick parts like hydrofoils, which need more toughness. James also said, “There’s no real limit to how we can combine the G-Vent technology,” including the potential use with natural-fiber prepregs. (Soon after we spoke, Hexcel announced the HexPly Nature Range, including resins with bio-derived epoxy content and prepreg options with natural-fiber reinforcements.)

A cost-benefit analysis that details potential savings by using OoA technology instead of autoclaves was not readily available, but James estimated that the capital expenditures for autoclaves vary “from $250,000 for a reconditioned oven to $25 million for a new, aerospace-grade unit. Operating costs will be significant too, but are hugely dependent on the size of the ’clave. In the future, we will run such an analysis for a typical marine customer, but for the moment the fact that an autoclave can be avoided is a clear benefit.”