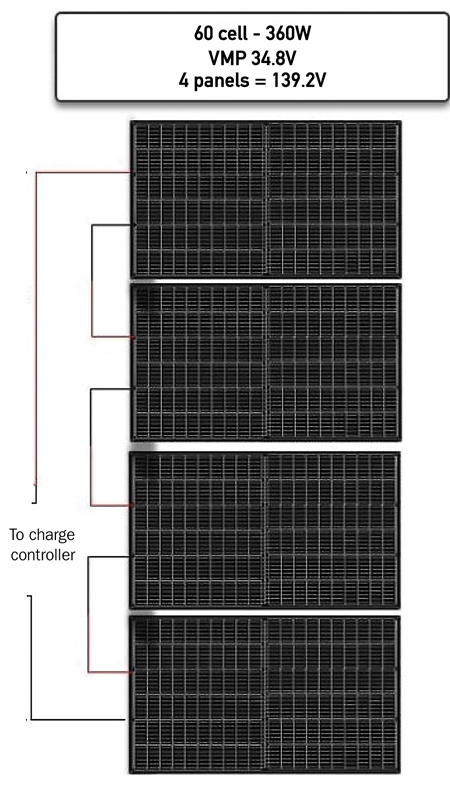 A client’s diagram for a series-wired array of four 360W solar panels indicates at maximum power it could yield as much as 139.2V. In a similar installation, a short in the wire from the panels to the charge controller delivered a mild shock to anyone who touched the bimini frame.

In a perfect world, every onboard component would be installed according to American Boat & Yacht Council (ABYC) or International Organization for Standardization (ISO) standards, or a manufacturer’s explicit instructions. Sadly, we all know that doesn’t always happen, and even when it does, perils still lurk. I’ve been involved in the extensive deliberations of ABYC’s lithium-ion/high-capacity battery subcommittee since 2013, but recently I encountered a solar charge controller failure scenario none of us on the committee, not even the components manufacturers, ever brought up or discussed. It’s an example of how a seemingly minor error can lead to a succession of failures and a potentially dangerous situation.

Installation of series-solar arrays routinely exceeding 48V (many of them pushing more than 100V) is a growing trend in marine electrical systems. In spite of their popularity, I’m not comfortable with systems exceeding 48V, at this point. Here’s why.

I had a customer text us while cruising somewhere in the Caribbean. He complained that he got a tingling sensation whenever he touched his stainless-steel bimini frame. A few back-and-forth text messages revealed the following: 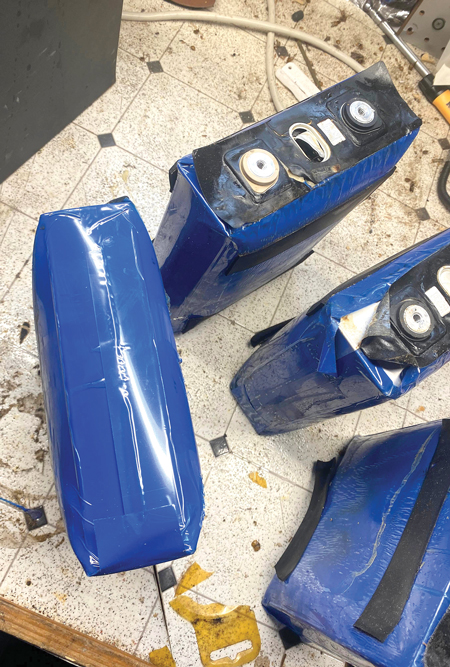 In an RV, the swollen cells from a lithium-iron-phosphate battery failed when voltage upward of 100V from series-wired panels overwhelmed the charge controller and the BMS.

1. The solar array he recently had installed in Florida consisted of four SunPower SPR-E-Flex-100 (100-watt) panels, each with a VOC of 21V.

2. His panels were wired in series for the “best performance,” as promoted by the marketing department of the manufacturer of his maximum power point tracking (MPPT) solar controller.

3. They had recently removed the semi-flexible solar panels from the bimini and collapsed the frame to prepare for a windstorm.

4. When they reinstalled the canvas and solar panels, one of the wires for the series array was inadvertently pinched between parts of the metal fittings in the bimini frame. The owners didn’t notice and simply plugged the MC4 connectors back together and headed off sailing. Over the next few days they both noticed a tingling sensation when they touched the frame. 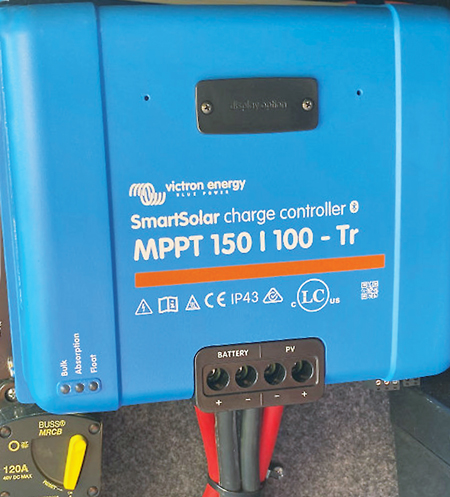 Much depends on the solar controller; and a quality maximum power
point tracking (MPPT) solar controller like this one relies on magnetic
decoupling to cut off the high charge voltage to batteries, which should
prevent the type of failure experienced in the subject RV system.

When you wire four 21V open-circuit-voltage panels in series, you have an open-circuit voltage for the array of approximately 84V. That’s enough to cause a tingle, especially with wet hands. The owners had trusted the solar panel installers, incorrectly assuming that four 12V nominal solar panels constituted a 48V array. MPPT controllers, unlike pulse width modulation (PWM) models, do not have their photovoltaic (PV) side/input voltage pulled down to battery voltage level. An MPPT controller converts the excess voltage from the array into charging current by decoupling the array voltage from the battery output side. Consequently, the input voltage of an MPPT controller can be well over 100V, but the output side is still safe for 12V nominal batteries. My point here is that you’re not going to get a tingle on the output side of a controller unless it has entered a full failure, but you are susceptible to getting a tingle on the input side when your array voltage is high enough.

More Than a Tingle

The next incident I’ll cite happened on a recreational vehicle (RV), but the lessons are the same on land or on the water. Just like my customer with the tingle-inducing bimini, this vehicle owner trusted his solar panel installer and never double-checked any of the work. The well-intentioned installer had attempted to maximize the solar array voltage to capture the best MPPT performance. The result was a solar array capable of nearly 100V. Because this is an RV, there was no issue of shading on the roof, so the installer did not break the panels into smaller array voltages and multiple smaller MPPT controllers (see Tom Whitehead’s “Sizing and Selecting Solar Controllers,” Professional BoatBuilder No. 190, page 50). That was problem number one.

Problem number two was that the MPPT controller was rated for only 70V and 600W, while the installed array was 100V and 875W. Because there is a safety margin, it’s possible that the installer performed some rough calculations and judged the application safe. These things can and do happen. In this case, the “rated” voltage of the panels is 17.5V or 17.5V x 4 = 70V. Those specs need to be read and fully understood before proceeding. There is a difference between open-circuit voltage and rated voltage. When running high-voltage arrays, it’s important to always connect through a high-quality MPPT controller and to carefully design the system so it doesn’t exceed the maximum voltage and current the MPPT controller can safely handle. When I contacted the RV owner about his failure, he said, “At this time I believe the controller was overloaded.”

What followed was a string of failures. The initial error was the installer oversizing the array for the MPPT controller. That caused the failure of the solar controller itself. And when this particular model failed, it allowed the array voltage of about 100V to pass through to the battery side. It’s worth noting that high-quality components from manufacturers such as Morningstar, Victron, MidNite, OutBack, etc. all rely on magnetic decoupling, which should prevent a failure like this. However, the MPPT unit in question was not equipped with that safety feature. When I spoke with the engineering department at MidNite Solar (not the manufacturer of the failed controller) to help me understand how this could happen, they could not explain a failure of this type unless the controller in question did not use inductors (also called toroidal inductors). Our best speculation is that this inexpensive unit used circuit-board-based electronics as opposed to an inductor. But as is typical with many of the component suppliers that often just slap a sticker on someone else’s product, getting hold of tech support or an engineering department for the failed product proved to be impossible.

Fortunately, our RV owner had chosen lithium-iron-phosphate batteries, not conventional lead-acid cells, which would have quickly been driven into thermal runaway with 100V feeding into them. When the MPPT controller failed, the positive and negative terminals of the LiFePO4 batteries were subjected to the full 100V from the solar-panel array. Remarkably, there was no fire or explosion, only wisps of white smoke from the LiFePO4 cells’ blown venting caps. The prismatic-lithium-iron-phosphate cells inside these batteries ballooned when they were grossly overcharged, so much that they split the battery’s metal case wide open. It scared the heck out of the RV owner but could have been much worse. 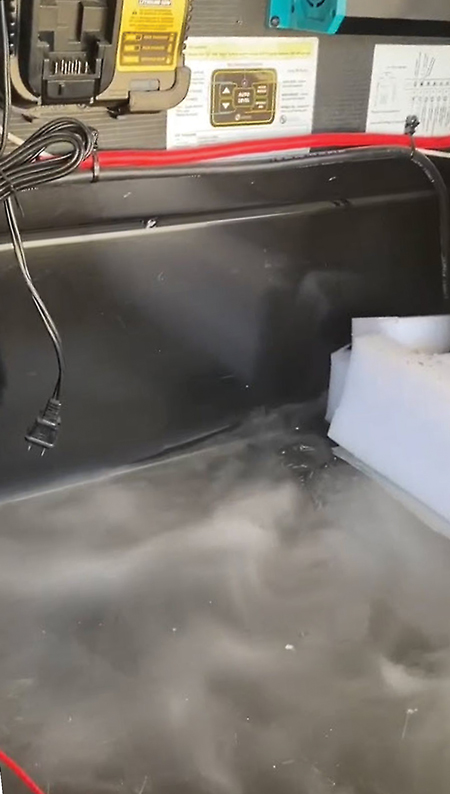 White smoke from the batteries’ blown venting caps got the owner’s attention as the 100V from the solar array was fed into the batteries.

While the resulting battery destruction wasn’t a disaster, let’s look at what actually failed downstream from the inadequate MPPT and the excessive 100V input current. All lithium-iron-phosphate batteries require a battery management system (BMS), and the BMSs on these batteries did their best to protect them from the high voltage. Indeed, one of the parallel batteries remained protected and didn’t vent the cells or balloon. But the other BMSs failed to protect the batteries. Was that the fault of the BMSs? No, not really.

The BMS boards in many of these drop-in LiFePO4 batteries use field-effect transistors (FETs) as switches to protect the battery. The problem is that most FETs have a rough maximum-voltage rating between 60V and 85V. If we dig a little deeper, we can also see that the chip inside the BMS sensing the voltage and sending commands to either disconnect the battery or leave it connected can handle up to only about 40V.

To recap the failure:

1. The array was oversized for the controller.

2. The MPPT controller failed and passed full-array voltage to the battery bank.

3. The BMS triggered a high-voltage disconnect.

4.  When the array voltage continued to flow, the chip that runs the BMS board failed, which then caused the FETs to fail and consequently subjected the battery to the full-array voltage.

Understand that this is not an issue of one particular LiFePO4 battery brand having the BMS fail to protect the battery. This would happen to almost any FET-based BMS. The chips that run these BMS boards and the FETs can handle only so much voltage. Of course, there are ways to design BMS boards that would avoid this issue, but how much do we want to devote to that preventative technology when that voltage should never get to the battery in the first place, not with lead-acid, not with lithium-iron-phosphate, not with any chemistry. 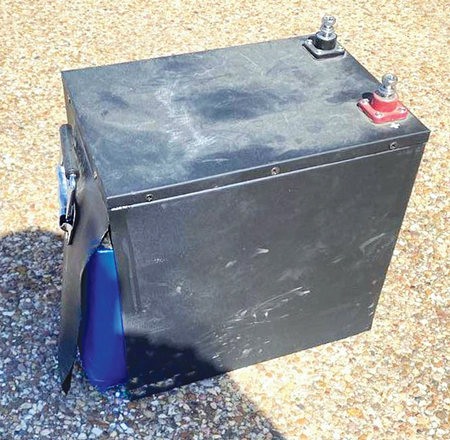 The swollen cells of the overcharged lithium-iron-phosphate battery ruptured the side of the metal case.

To keep your system safe, always observe the manufacturer’s recommended maximum number of batteries to be put in series as a good indicator of the maximum allowable voltage the BMSs can handle. Practically speaking, if the manufacturer specifies four batteries in series, the maximum solar-array voltage that should be connected to any single battery of that model is somewhere around 50V. If the manufacturer permits only two batteries in series, this system can handle around 30V maximum. It should be standard best practice to connect a PV array to LiFePO4 batteries only within the brand’s maximum safe series voltage.