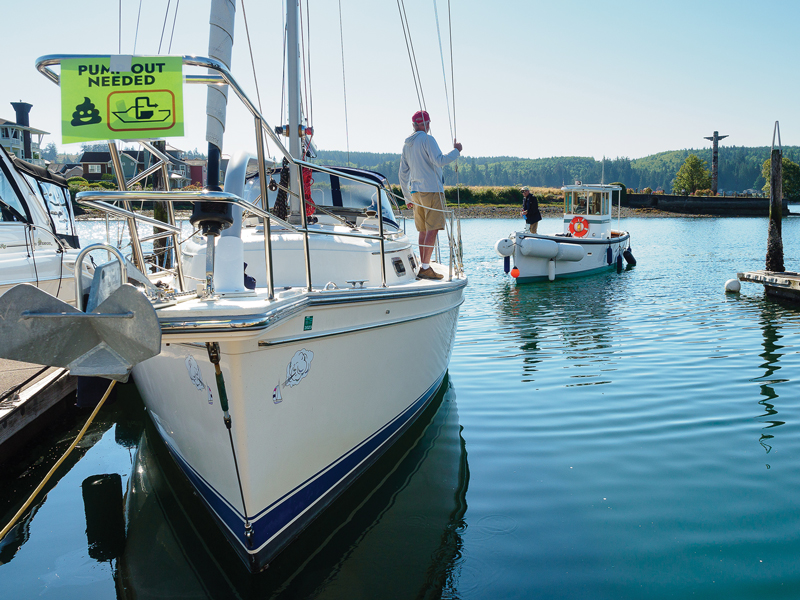 Twice each week, on Wednesday and Saturday, it’s pumpout time in the marina at Port Ludlow, Washington. That’s when Clean Bay, the fully electric pumpout boat makes her rounds to empty the holding tanks of vessels belonging to marina tenants and transient guests throughout the harbor—for zero dollars, with zero decibels, and zero stink from an exhaust pipe (see “A Teachable Moment” in Professional BoatBuilder No. 181, page 68). 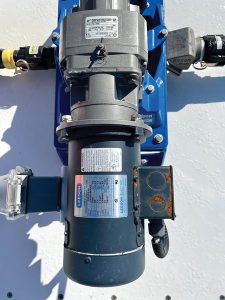 “It’s a great service,” said Jim Congdon, owner of Pompano, a 38‘ (11.58m) Island Packet Estero, the first client that morning, who had spent the night in a transient slip on A-Dock on the return trip from the San Juan Islands to Everett. It was his first experience with Clean Bay’s services, which he compared favorably to others he has used elsewhere. Congdon was on the sign-up sheet and had his vessel marked with a placard signaling that pumpout service was scheduled.

Dockmaster Eric Sturtevant, assisted by deckhand Greg Kingman, made short work of the job, nuzzling Clean Bay and her thickly fendered bow up to the port side of the sailboat, where Congdon was waiting to connect the pumpout hose’s suction fitting to the holding tank’s opening; the Edson 120 single-diaphragm blackwater pump with remote control quickly pulsed sewage into Clean Bay’s 500-gal (1,893-l) holding tank, without mess or drama. Shut off the flow valve, break the vacuum to disconnect the suction cup on the holding tank port, hand the hose back to the operator, thank you very much, goodbye, end of story. 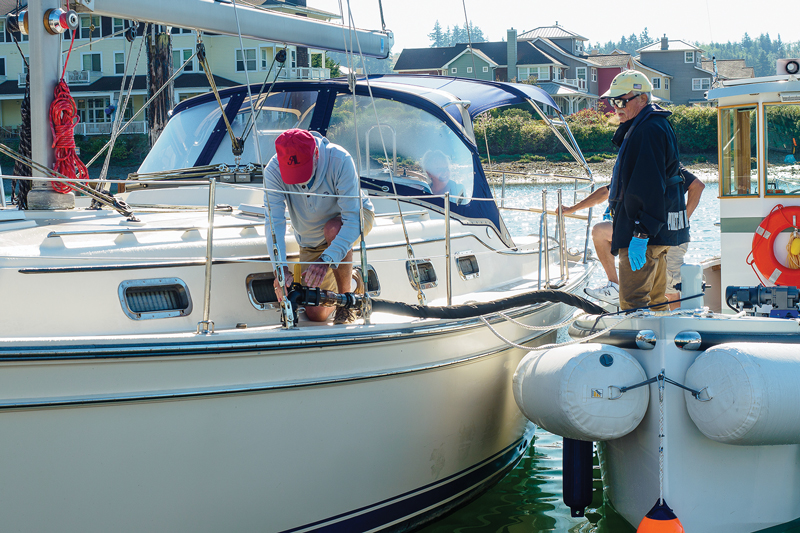 Congdon (left) connects the suction fitting to the top of his holding tank while deckhand Greg Kingman waits for the all-clear to start the remote-controlled sewage pump.

But unbeknownst to Congdon and the other half-dozen boat owners who flagged down the vessel on that warm Saturday morning as she meandered through the anchorage, the Clean Bay is a little celebrity in her own right. She was built locally by students at the Northwest School of Wooden Boatbuilding (NWSWB), 10 miles (16.1 km) up the road in Port Hadlock, and financed by grant money to render a useful service to the boating community. Four cohorts in the old six-month format of the system’s curriculum worked on the vessel under the guidance of lead systems instructor Kevin Ritz, who specified much of the boat’s equipment, and two boatbuilding cohorts constructed the hull, deck, tank, and pilothouse. 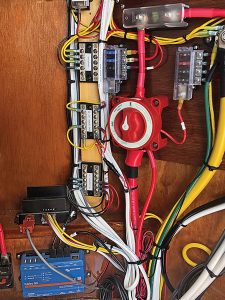 Ritz, a liveaboard resident at the Port Ludlow marina, also keeps an eye on the systems of Clean Bay, by picking up the Bluetooth signal of the battery monitor when he motors by on his own boat. On that Saturday as he passed, he learned that the batteries weren’t fully charged. It did not affect operations, but Ritz knew that he needed to look at probable causes and review the charging process with all the crews. “There are two different switches that need to be turned on as master switches,” he said. “And then there are subpanel switches, and you need to do it in an order.” He also noted that the Clean Bay is the first boat Torqeedo equipped with four batteries. “Nobody had done that before, so they did a special design.”

NWSWB’s boatbuilding instructor Bruce Blatchley pointed out that despite all the onboard advanced systems, the Clean Bay was still a teaching project first and foremost. “[Students] were all superpositive about it, partly because of its mission, and partly because it really did fulfill the criteria that we set out…including as many different construction styles as possible,” Blatchley said. “Tim [Nolan, designer] integrated strip planking, cold-molded, foam core, plywood, and it worked out great. We had a bit of free rein on the cabin, which was fun, because we got into more traditional cabinetry.” No cabinetry on the holding tank, though: “We did half-a-dozen infusions on the tank and lid using WEST System Pro-Set INF-114 resin and INF-210 hardener. On those infusions we were not going to open the valve; we weren’t going to mix before the drop test said 29 [inches of mercury]. The people who did the infusion were really fastidious about getting the bag on right. The [tank pieces] turned out very even and did not have voids or holes.”

By contrast, the cabin sides are plywood, with live-wood window trim and a foam-core piece on top, which also was infused to be strong enough to support the two Renogy 300-watt, 12V monocrystalline solar panels that, in essence, power all the house loads.

At first glance, the Clean Bay with her slab-sided hull and high topsides appears narrow, a bit tender even, compared to the skiffs or landing-craft-style pumpout boats that roam the waters elsewhere. And she does look yachty with her wooden trim, the solar panels on the pilothouse roof, her jaunty sheerline, and all the latest electronics, including a VHF with a loud hailer, a chart plotter, depth sounder, navigation lights, a muscular Sleipner Side-Power SE60 bow thruster, Victron Cerbo GX communication center and systems monitor, and an ElectroGuard 620 impressed-current cathodic protection system with two 6V sealed L16 AGM deep-cycle batteries. It’s all a far cry from minimalistic and sometimes roughly hewn workboats that perform humble tasks. 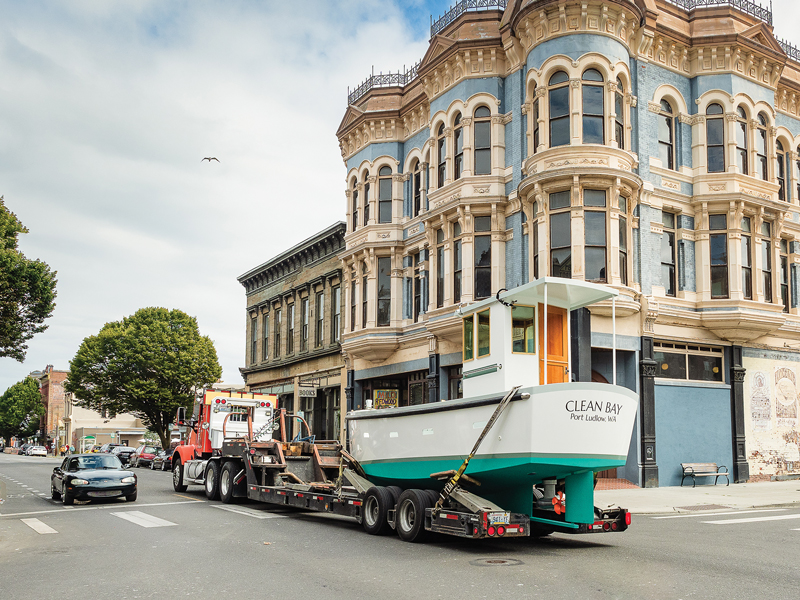 Clean Bay, en route to her launching in Port Townsend in August 2021, shows her slender slab-sided hull and the pod drive of the electric propulsion system.

In fact, she is a remote cousin of designer Tim Nolan’s favorite personal boat—the small, capable 16‘ (4.88m) motorsailer Heather (see page 52), which informed the lines of the Clean Bay. With less than 7‘ (2.13m) of maximum waterline beam, he kept Clean Bay’s hull slippery to eke out range and performance from the 10-kW Torqeedo pod drive and the four Torqeedo Power 48-5000 lithium batteries. Early estimates pegged the range at 37 nautical miles at an average speed of 5 knots. Her narrow beam and good maneuverability with the pod drive and side thruster enable the crew to get into tight spots, e.g., between the dock and a large powerboat’s bow to make the hose reach the pumpout port amidships.

At the end of her tour, Clean Bay pulled up to the stationary pumpout at Port Ludlow’s fuel dock to empty her holding tank and take on 80–90 gal (303–341 l) of ballast water to help her float on her lines when empty. She has approximately 1,000 lbs (554 kg) of bagged lead shot in her bilge, which might have to move a tad farther forward when she’s hauled out for winter service. In her first two months of operation, the crews have kept a handwritten log of the boats pumped out (more than 100 at the time of my visit) and of suggested adjustments and improvements, like installing an external manual backup switch for the sewage pump.

As word of the boat and the service is getting out, a delegation of the Port of Port Townsend came to check out the Clean Bay. “I took them out for a ride, and they liked the electric pump,” Ritz said, “so I talked about an electric 24V sewer pump with remote control in place of a gasoline-powered pump—similar to the one we have, and solar panels on top of the tank, because it’s amazing what we can accomplish with solar power, collecting energy that’s already there.” To that end, Ritz said he’s waiting for Torqeedo’s solar charge controller, which would enable some of the solar energy that now covers the 12V house loads to also charge Clean Bay’s 48V propulsion and pump batteries.

Stepping off, I had the impression that this might just be the most positive experience one could have while collecting and transferring raw sewage for orderly disposal, with two caveats: The service might benefit from wider advertisement and easer accessibility, e.g., with a signup via smart-phone app. And while cruising through the anchorage, the Clean Bay could play a friendly jingle in measured volume, maybe like an ice cream truck, to alert customers that the most beguiling pumpout vessel in the Pacific Northwest is about to come alongside to lighten their load. For zero dollars, with zero decibels and zero emissions.