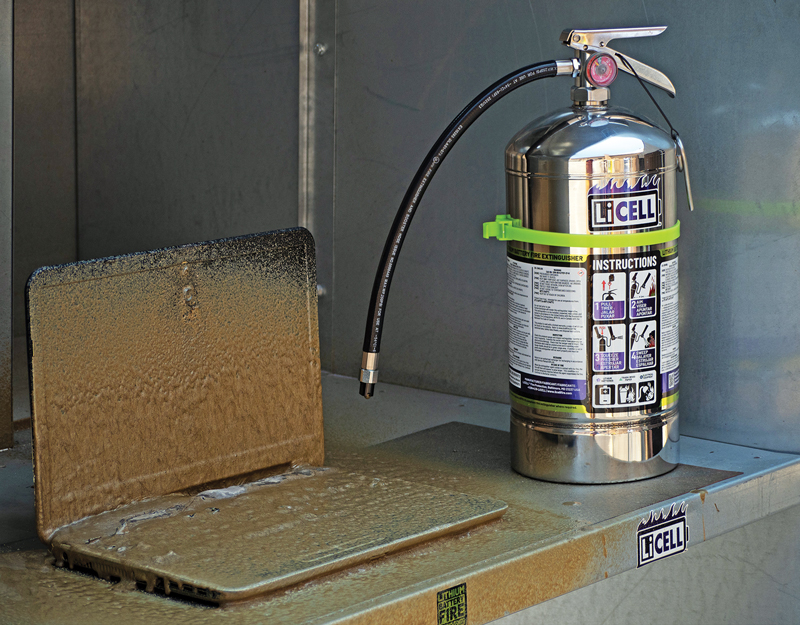 We live in a battery-powered age of unprecedented electronic connectivity that allows us to communicate, navigate, research, monitor, and operate similarly connected technologies remotely, wirelessly. The convenience delivered by these electrical devices shorn of their permanent power cords has largely been made possible by improvements in battery technology—lithium-ion batteries, to be specific. But the variety of lithium chemistries that have become common in our households, schools, offices, automobiles, and boats (of course) leave most of us unsure of our exposure to one of the downsides of the lithium-ion revolution: fire danger.

While well-designed lithium-iron-phosphate-based electrical systems have proven reliable and safe in recent years, the unintended vulnerability from the myriad rechargeable tools, appliances, and devices increases with every new battery and charger you bring aboard. Two cases in point: In September 2019 an intense fire and sinking of a dive boat off Santa Cruz Island, California, killed 34 passengers. Follow-up investigations noted that the fire started in an area where multiple lithium-ion batteries from different devices were being recharged on extensions cords and power strips. In February 2022 a cargo ship loaded with thousands of European cars (many electrical vehicles) bound for North America caught fire. While the cause of the fire remains unclear, the lithium-ion batteries in those cars burned at very high temperatures and undoubtedly frustrated the efforts of crews who fought the flames for weeks before the ship sank.

Robert Ellis, business development director at LiCELL, a subsidiary of marine fire-suppression experts Sea-Fire, said, “A couple of years ago we would get calls asking, what did we have for lithium battery fires? The answer we had to give was, ‘Nothing—nobody does.’” At that time the best advice anyone had for extinguishing a burning lithium-ion battery was to pour a lot of water on it, 30,000 gal to 80,000 gal (113,562 l to 302,833 l) for an electric-vehicle fire, according to Ellis. “The big issue was thermal runaway,” he said. “Once you get one of the cells in the battery to overheat, it causes the cells around it to overheat in a chain reaction.” The resulting fire can easily reach 1,832°F (1,000°C), which could possibly be extinguished using conventional firefighting materials, but the residual heat will cause it to reflash and keep burning.

The LiCELL extinguishers, filled with a proprietary mix of vermiculite and water to create a stable suspension that is not electrically conductive, are best deployed as early as possible at a steady flow rate, Ellis said. “It coats and encapsulates the fuel source to smother it—deprive it of oxygen—at the same time through evaporative effect it is pulling heat out,” he explained. “If you apply this too quickly, the water will flow off. The more product that you get on and stays on, the better.” He said it can also be used to spray protectively on another device or other batteries adjacent to a lithium-battery fire to keep it from spreading.

Looking back at the dive-boat fire, Ellis suggested that prevention and onboard alarms are essential to preventing similar accidents, even on boats equipped with specialized extinguishers and blankets. He noted that there are now readily available protective boxes and bags for storing and charging lithium-ion-powered devices that can reduce the risk of a destructive onboard fire springing from any of the seemingly benign and indispensable portable tools we rely on.