The rebuilding of Mattapoisett Boatyard is underway after a catastrophic fire that left charred jackstands and metal parts next to partially burned boats and cars.

Mattapoisett Boatyard has been on Ned’s Point since 1962 and was run under the watchful eye of Art McLean. He eventually passed it on to his son-in-law, David Kaiser, who started there in 1987 and has been at its helm for about two decades. Now Kaiser is training his son Ned as successor. It’s a nice family whose yard has served as life support for the local boating community for many years and provides full service for anything that floats.

On Friday, August 19, a ferocious fire ripped through the sheds at Mattapoisett Boatyard. After more than a month of dry, hot weather, the entire property ignited within minutes. Firefighters from near and far responded to the maelstrom and managed to prevent it from reaching the neighboring properties. The truly dramatic effort to save the surrounding community came at the cost of the entire boatyard. Every building, shop, tool, car, and boat was consumed. By the time the smoke cleared, the only things sticking out of the ashes were hundreds of charred jackstands, like the bones of giant beasts.

Hearing the awful news, I could only think that this would be the death of yet another mom-and-pop community boatyard. I knew it was going to be a depressing sight but nevertheless thought that I had to stop by to pay my respects. The yard was swarming with hungry excavators and dump trucks. After only five days, the property had been scraped bare of dead vehicles and collapsed debris. 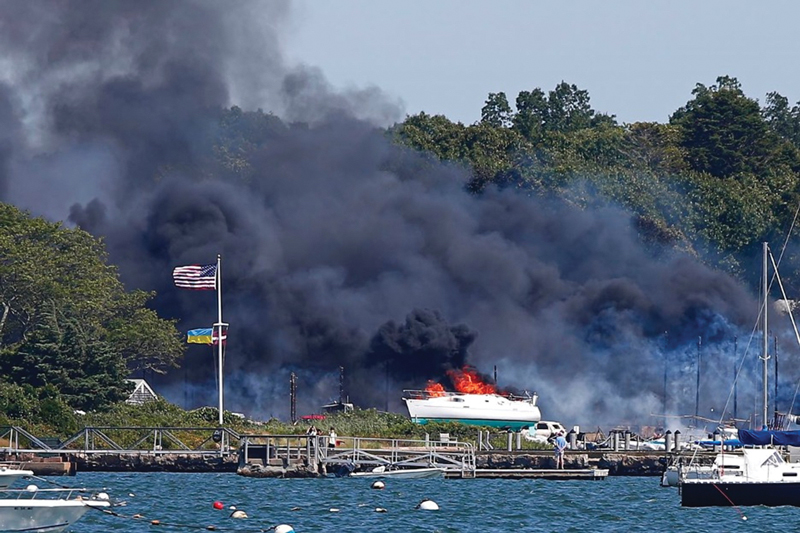 Strong winds on the day of the fire, accelerated the flames that devoured the entire facility .

A large tent had been erected at the corner of the yard. The entire yard crew was at picnic tables eating hot dogs and burgers, and David Kaiser was manning the grill. I was shocked to see that he had the same big smile and ever-pleasant attitude. When I asked him what his plans were, he excitedly said, “We’re going to rebuild!” There wasn’t a moment’s hesitation. Failure was not an option.

Six weeks after this traumatic event, we caught up with Kaiser, who shared details of the accident and updated us on the progress of the rebuild. The interview was edited for length and clarity.

Did anything survive of the original yard?

David Kaiser: There was nothing left; all the property was leveled. Not a screw or hose clamp, there wasn’t a paint pot to be found. Everything, every single tool, 100% gone. It was very windy, and the word incinerate came up often. Boats with a pair of V8 engines in it, there were no discernible parts left, only the cast-iron manifolds…that was about it.

Nothing of use was left to salvage from the yard’s original six wood-framed buildings that covered a little over 40,000 sq ft (3,716 sq m) of service and shop space.

What caused the fire?

D.K.: It was an explosion that occurred when we were working on a 31 Bertram, which has fiberglass fuel tanks. The same employee did the exact job over the winter. We emptied the fuel tank, it was ventilated, and, you know, we were doing all the protocols that needed to be done, and it exploded. He remembers every second of the event. He had been working the previous two days, trying to break the bond between the tank and the skin of the hull. That day, he had been in the bilge all morning, came back after lunch, climbed down, and simply turned the Fein multi-tool on. That caused the explosion. It appears that the original tank had been removed at a facility in Texas. The fire inspectors have found evidence of gasoline still in the hull laminate. He most likely pierced the skin of the hull, not the tank, which caused the release of explosive fumes into the bilge, of course something you would never anticipate.

How many boats were affected?

D.K.: There were 20 boats on the hard that were either in summer storage or being worked on, but here’s the good news: the wind was blowing from the water onto shore, so our entire waterfront was completely untouched—Travelift, docks, and launches, the underground fuel tank, all that was upwind of the fire. 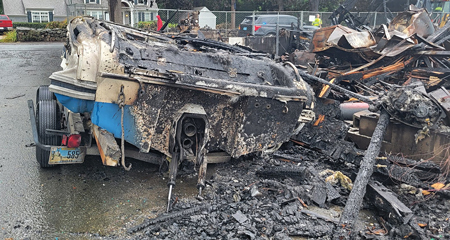 Debris and the remains of a destroyed fiberglass runabout await
removal in the days following the fire.

Did that influence your decision about rebuilding Mattapoisett Boatyard?

D.K.: You know, I hadn’t thought about that, but yes, that definitely would’ve factored into it if we had to rebuild docks on top of everything. The docks are not insured, so that would’ve added another half a million to our project. What really fueled our desire to rebuild, sorry for the pun, is the fact that no lives were lost. Our one employee who was badly injured is well on the path to recovery, and he said it’d probably take him six months to get back to 100%. He is very much looking forward to coming back to work.

What was the damage assessment?

D.K.: One hundred percent destroyed, that’s the data, but we have no [hard number], because the dollar figure really relates to the cost of the rebuild. Our buildings were insured as wooden structures, and if we had to rebuild those barns again, we probably could do it, but [the insurance] would pay for about three-quarters of the cost, maybe, or a little more than half. I’m not sure. But for a modern steel building, which is what we intend to rebuild with, I think the insurance is going to cover maybe a third of the cost. And that’s for one building. Our original footprint with six buildings covered a little over 40,000 sq ft [3,716m2]. And the proposal on the table right now is a building of about 15,000 sq ft [1,394m2]. It’ll be a building with work areas, storage, and five nice-size work bays, two of which we could drive our Travelift into. The other three are lower lying because we also want an aesthetics, not just a big box. 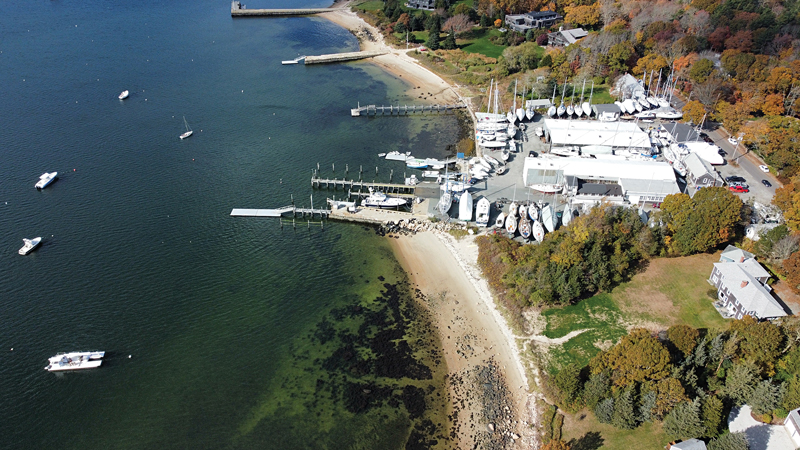 The rebuilding effort is well underway to replace the original buildings, shown here before the fire.

How many jobs will that save?

D.K.: Twenty or 21 full time, and they are all back to work right now. We never stopped. The fire was on Friday, and on Monday everyone came to work. We moved into a building on a property that we own, about a mile away from our waterfront yard. It’s about a two-and-half [one-hectare] acre lot where we store about 150 boats. And there’s also a 50‘ by 50‘ [15.24m by 15.24m] two-story building on the premises. We moved in upstairs with the offices, and downstairs there’s a good-size shop space and a stockroom. Today we’ve been mapping out where to put the heat in this building [laughs] because we know we’re going to be here at least through the winter. My best estimate right now is that we might be able to move into the new building next fall.

You received support that must have been a big help to get back to work.

D.K.: Support has been incredible. The letters, e-mails, text messages, and people writing checks for our tool drive and employee welfare. Just to get over the whole shock and then anything extra to put toward a building fund, because everyone knows insurance never covers the [entire] bill. As far as the government goes, the town officials, the fire and police departments, they have our back 100%. The building inspector told me, “You get a plan on my desk, and as long as it meets the flood zone requirements and the ADA [Americans with Disabilities Act] requirements, I’ll do everything I can to get this streamlined and moved along for you.”

What about other area businesses?

D.K.: With all the money and support that people have given us, let me tell you about the tools: This tool drive was arranged by a few different people around town, including Tim Moll, one of the regional VPs of Safe Harbor and Triad Boatworks, another boatyard in town. They were instrumental in getting people to donate tools. We buy all our diesel and gasoline from Guard Oil, and they showed up with four rollaway toolboxes and a pressure washer, and a whole bunch of hand tools. Where are all these people coming from? And the Snap-on rep authorized 20% off of everything to get our mechanics stocked up again.

D.K.: It’ll be a work base with storage, office, stockroom, and workshop while reducing our [physical footprint] by 30,000 sq ft [2,787m2], so we’re giving up a lot of inside storage. Our long-range plan, which is much shorter term since the fire, is to build a covered facility, a steel shed at our inland yard. But first we have to get on track with the main yard. There we’ve always had a parking issue once all the boats are in the water. So we need the extra space for parking…and additional outdoor storage for boats that don’t get unrigged or the tall powerboats and others with towers. Eventually we’ll construct indoor storage, probably 15,000 square feet at our Route Six lot. Nothing will change with the docks.

Imagine a marine conference filled with boatbuilders and suppliers talking about business strategy, not boatbuilding, and no one trying to sell anything. Such is the ambiance over the past 15… Read more »