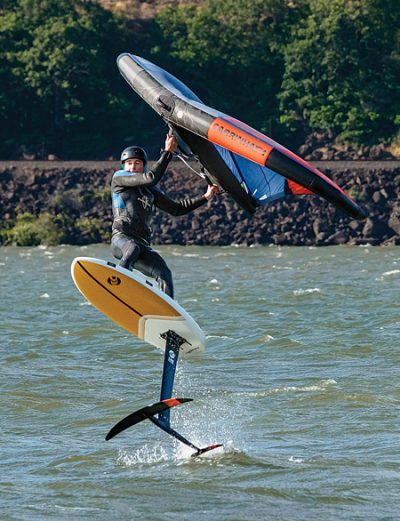 Innovative Composite Engineering (ICE) has evolved since the firm’s inception in the 1990s but remains a leader in the evolution of wind- powered boardsports.

Driving through the Columbia River Gorge on a summer day, one cannot help but notice the abundance of sun, wind, and waves. Boardsports is the watchword here, and the Gorge has attracted legions of enthusiasts, among them Steve Maier, who quit his automotive engineering job in the Midwest and moved to the area in the 1980s to windsurf. He also started Innovative Composite Engineering (ICE) in 1992, a carbon composite shop specializing in precision parts (see “Crafting Carbon,” Professional BoatBuilder No. 174, page 60). Revenue numbers were not made available, but the firm successfully weathered changes in tastes and technology in the past 30 years and emerged from the COVID pandemic not just intact but with a promising future, owing to diversification and developing new products for new fads, new clients, new markets, and new industries.

Maier’s first success was called “Original Skinny,” a flexible, light, and robust carbon fiber windsurfing mast that revolutionized the game. Nothing advertises better than winning competitions, and burgeoning demand soon forced Maier to move from his garage to a larger shop in White Salmon, Washington. Eventually, he rebranded the mast production as NoLimitz, which still produces carbon tubes for boatbuilders and others, and masts for board sailors, except that most of these masts don’t hold up sails. Of the throngs of frolicking wind-and-board fanatics in the Gorge today, few, if any, choose traditional windsurfing rigs with articulating masts and wishbone booms. Almost all of them use foils that lift the boards clear of the water, either powered by kites or aero wing sails. 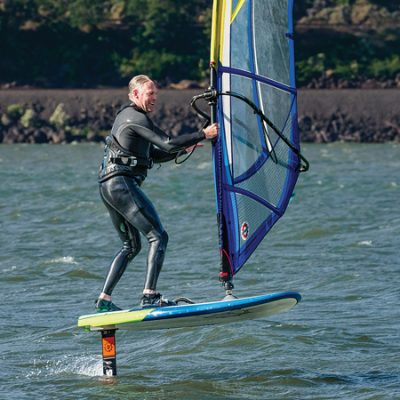 Despite serving air- and spacecraft manufacturers and the military, ICE keeps a hand in wind-powered board sports with carbon spars for foils and traditional windsurfing rigs.

“Instead of asking, ‘What sport were you doing?’ now it’s ‘Were you on fin or on foil?’” said Rob Warwick, sales manager at ICE. “I thought it was eye-opening, because all of the disciplines now made this transition in some way to a [hydro]foil.” With demand for old-fashioned windsurfing plummeting, ICE pivoted to manufacturing parts for the rapidly evolving foils. “Everyone’s trying to reinvent their version of the wheel,” Warwick said. “We saw this in kiteboarding. We saw this in windsurfing 30 years ago. Today things are far more standardized. We felt we could bring our carbon prowess to bear on the mast that holds the foil to the board. This is a huge torsional and stiff piece of equipment that most people think of last. They worry about the wings since that’s what they’re riding and that’s what matters most, but the connection to the board—or the boat—is critical.” NoLimitz decided to stay out of the design game, instead building foil masts to client specifications. “If you were to order a foil mast, we wouldn’t just need length, but we’d also ask what fuselage you’re fitting it to,” Warwick said.

For this application, ICE uses an intermediate- and high-modulus blend of carbon made by Mitsubishi (i.e., HR 40), and Newport 301 as standard resin. Warwick intimated that NoLimitz could also build with M55J, a high-modulus carbon fiber with enhanced tensile and compressive strength—another notch up the performance scale but coming at a cost the recreational market would not support. 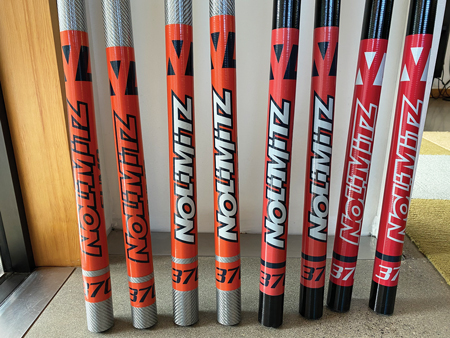 With the advent of kites and AeroWings, demand for traditional rigs has dropped, but ICE still makes masts for inveterate windsurfers who most likely use riser foils.

Still, in recreational industries, gear made out of carbon fiber is more commonplace than ever. “Consumers are educated about carbon fiber. They understand it and are already using it,” Warwick said. “They have adjusted to carbon composites; between paddleboarding, windsports, bikes, and small sailboat parts, we’ve definitely seen an uptick.” Not to mention tennis rackets, camping kit, hiking poles, bear canisters, and coolers.

By Warwick’s estimate, recreational market products make up only about 10% of ICE’s overall business volume. The company focuses on other industries—construction, oil and gas (e.g., composite plugs that seal inactive drilling wells), and automotive, with the latter two being subject to market volatility. Space, on the other hand, is a new opportunity with private companies like SpaceX deploying hundreds of satellites, or secretive programs for the Department of Defense. “With flight-critical parts, there is more testing required than we are used to,” Warwick said. “We’re doing really well in that market that continues to grow for us.”

Much of what ICE builds is made of high-modulus prepregs, requiring storage in freezers. In the era of supply-chain bottlenecks and suppliers demanding larger orders with longer lead times, it can be challenging. On one hand, ICE can’t afford to idle production while waiting for material 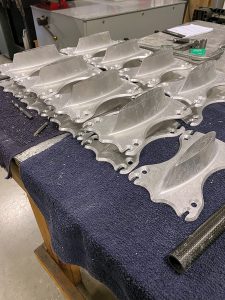 ICE also produces aluminum fittings for attaching foil spars mounted on the underside of the board.

shipments; on the other, they don’t like to sit on the material at their expense or have it go out of date. “We always are very selective when placing orders,” Warwick said. “Luckily, the team here is a well-oiled machine in backfilling if we have things come up, but it definitely puts us at a greater risk if a program was to cancel or be delayed, with some materials on a six-month shelf life.” It’s all about managing orders and finding takers for material that is still usable but out of date.

“We have a very large freezer that is probably 2,000 sq ft at 0°F [185.8m2 at –17.8°C],” said Warwick’s sales and marketing representative, Chris Nye. “So we have the ability to keep lots of material on hand, and material that’s in there—even though it’s expired—it’s still been stored properly.” And that freezer is the heart of the operation, triggering a cascade of alarms if it were to have problems holding its prescribed temperature. “If I cut my arm off on the production floor, it would elicit a less [urgent] response than if the freezer started increasing in temperature,” Warwick joked.

But luckily, prepregs that exceed their “best-buy” date in proper storage can still be used in recreational applications. “Windsports, sailboat, marine generally, even some industrial applications really don’t mind if the material is out of date,” Warwick said. “We can use it to make foil masts or parts for [yacht designer] Paul Bieker, for instance. It is still perfectly fine generally, [but] we can’t certify it for military or aerospace applications.” It’s a common practice for large vendors like Mitsubishi or Hexcel, which spool up large quantities for big orders and often have leftovers, to sell at a discount to small specialty builders, who get access to higher grade prepreg products than they normally would use. 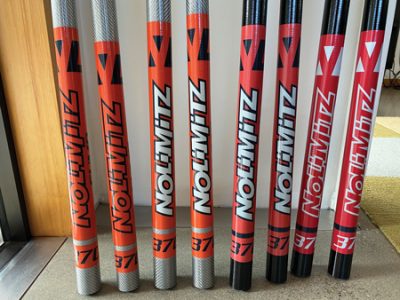 With the advent of kites and AeroWings, demand for traditional rigs has dropped, but ICE still makes masts for inveterate windsurfers who most likely use riser foils.

Recycling carbon is a popular topic but not easy to implement. ICE is on the lookout for a source of repurposed carbon fiber for lower-grade applications and a buyer for their discarded material. For now the strategy calls for waste reduction and recycling trimmings, e.g., with a local artist. “We were entertaining ideas to just bag this stuff up and send it back into the supply chain to keep it out of a landfill,” Warwick said. “Carbon is going to stand the test of time. You can burn out the matrix, return it back to a graphite form, and treat it like [what] you started with. As the technology grows, it will become more price competitive.”

The firm has yet to dive into composites made from natural fibers such as flax, hemp, or basalt. “For NoLimitz it would be a perfect application if I can produce a foil mast at top-of-the-line performance that looks a little different, can be spotted from a mile away, and tells that story,” Warwick said. “It has to generate interest before it can generate demand.” 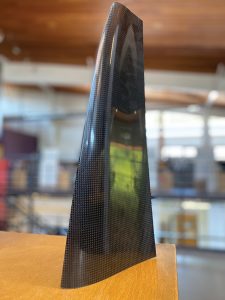 A nicely profiled carbon part is destined for an unspecified marine application.

Early in the COVID pandemic, ICE, which employs approximately 60 full-time workers, switched administration and sales staff to remote work and changed factory crew schedules by spreading out the shifts to accommodate social distancing in its 65,000-sq-ft (638.7m2) facility. The firm also got help from the DOD (Department of Defense), which designated it an essential manufacturing business, so there was minimal disruption in the production schedule.

To retain skilled staff in the relatively rural setting, the company invested in company-wide wage hikes to entice more new hires and retain existing staff. Warwick: “We are still able to operate, although the cost is higher, but you can’t [do business] when you have massive turnover or you can’t find people to do the work. So it was a no-brainer for us, and with the cost of living climbing, we’re really glad we did it to stay competitive.” 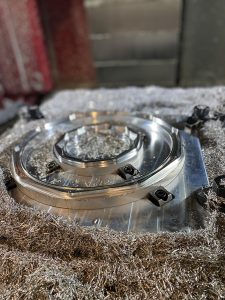 Early in the pandemic, ICE brought its outsourced waterjet cutting in-house. They also started machining more fittings in-house, and Warwick plans to do the same with grinding operations. “We had to weather the storm and face delays,” he said, “but as the dust settles, we are better set up to support our customers and not being beholden to vendors facing delays, shortages, and crunch. Business definitely took a hit in places, but we also garnered a lot of new interest in other markets. Satellites and recreation spiked, while oil and gas, automotive, and aerospace dipped. But in general, the big-ticket items kept rolling in.”

While others might be hearing the footsteps of another recession approaching, ICE sees the possibility to grow by as much as 30% over the coming two years. It’s ambitious, Warwick allowed, but entirely possible if they keep hitting the right notes. “Get the supply chain sorted, get labor trained up, get them in. That doesn’t all happen overnight.”