It’s strange and fascinating how some companies are founded. Sometimes the formative event is lightbulb inspiration, other times serendipity or plain dumb luck. For Edwin Kehrt, founder of Lifeline Industries,… Read more »

It is well known in the boating industry that the popularity of outboard motors continues to trend upward. I/Os are dead in the water. Inboards now seem relegated to midsize… Read more » 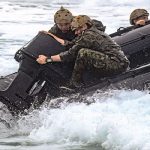 The High Speed Boat Operators (HSBO) Forum in Gothenburg, Sweden, is a gathering unlike any other. Uniforms are part of the ambience, as 370 delegates including search-and-rescue, police, customs, special… Read more »