In the December/January issue, No. 176, we invited Westlawn Institute of Marine Technology students past and present to share their experiences with and opinions about the 89-year-old distance-learning school specializing… Read more » 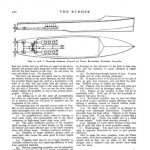 Hickman’s Imagination and the Dawn of Surface-Piercing Props