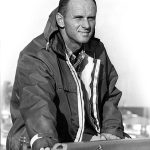 Over the Bar: Lowell North, Sailmaker

Lowell North, a sailing and industry icon, died last June at his home in San Diego, California. He was 89. For years, the Star class of one-design sailboats was considered… Read more »

The boating industry lost one of its most flamboyant members April 10, when Irwin Jacobs shot himself after shooting his wife of 57 years, Alexandria, in their Orono, Minnesota, home…. Read more »