With nearly 4,300 verified visitors and 700 exhibitors from 55 countries, 2018 was a banner year for the International BoatBuilders’ Exhibition & Conference, held Oct. 2- 4 at the Convention… Read more »

Not long ago I was looking for some backing-plate material for a new piece of deck hardware. Not wanting to drive a long distance to the nearest chandlery, I bought… Read more »

As wireless electronic connectivity has come to dominate our smartphone- and tablet-driven world, I’ve had great hopes that the technology could help eliminate some of the long cable runs and… Read more » 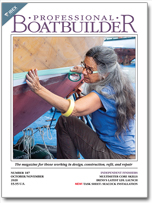