By Steve D'Antonio and Dan Spurr | category: Tools | No Comments

Fall is not only the occasion for haulouts but also the time for marine-industry trade shows. The next season will begin soon, with the International BoatBuilders’ Exhibition & Conference (IBEX)… Read more »

from “Rovings,” Professional BoatBuilder No. 157 It doesn’t seem so long ago that three-speed winches for trimming sails were introduced by major manufacturers like Lewmar, Harken, and others. Just as… Read more »

from “Rovings,” Professional BoatBuilder No. 157 Compiled by Dan Spurr The rapid development of so-called sailing foilers has drawn much attention in recent years, notably the Moth class and the… Read more »

from “Rovings,” Professional BoatBuilder No. 157 Compiled by Dan Spurr If you’ve had the pleasure of using a marine or auto-motive engine-service manual written any time through the 1970s, you… Read more » 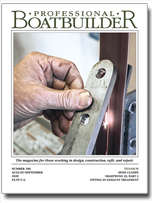