from “Rovings,” Professional BoatBuilder No. 156 Compiled by Dan Spurr Vigor Industrial, a major builder of ships and repairer of commercial vessels in the Pacific Northwest, and Kvichak Marine Industries,… Read more »

I looked at the thermometer attached to the engine’s air inlet filter and raised an eyebrow. It read 117°F (48°C), and it hadn’t stopped climbing. Before looking at it, however, I… Read more »

Editor’s Note: There are a lot of misunderstandings about marine bonding systems, as our technical editor Steve D’Antonio pointed out in his recent article The Mysteries of Bonding Systems on ProBoat.com. That confusion… Read more » 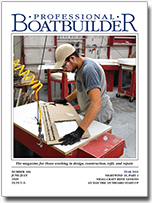