In the 1960s and ’70s, when boatbuilders scrambled to satiate a burgeoning demand for new models, a production run of 500 units wasn’t unusual. Among builders of keel sailboats, Pearson,… Read more »

All good things don’t have to end. The American Boat & Yacht Council (ABYC), which has hosted the Westlawn Institute of Marine Technology since 2003, recently announced that the long-distance… Read more »

Few boats are as notorious as Como Nova, formerly Jade, whose ignominious distinction was to nearly bankrupt her builder, Jim Betts. Described in some detail in the magazine pages (see… Read more »

Video: On the Show Floor at IBEX

Alan Gurney was not yet 30 when timber baron Robert Johnson commissioned him to design an ocean racer that would “go for all-out speed, beating the competition by finishing first,… Read more »

Compiled by Dan Spurr Scott Jutson: From Ocean Racers to Powercats The randomness of life sometimes redirects one’s career—sometimes out of necessity, occasionally out of choice. For yacht designer Scott… Read more »

from Professional BoatBuilder magazine No. 150 Compiled by Dan Spurr Glen-L Passes 60 Since its inception in 1953, Glen-L Marine has probably put as many people on the water as… Read more »


Warning: Use of undefined constant home - assumed 'home' (this will throw an Error in a future version of PHP) in /home/proboat2/public_html/wp-content/themes/ProBoat/index.php on line 91 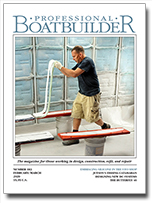 
Warning: Use of undefined constant homeads - assumed 'homeads' (this will throw an Error in a future version of PHP) in /home/proboat2/public_html/wp-content/themes/ProBoat/index.php on line 95