Like them or not, boat shows are a fact of life for professional boatbuilders. Deep as we may now be into the digital era, no virtual presentation on a computer… Read more » 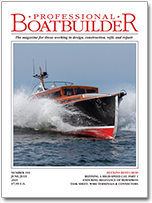