A colleague recently described to me the unusual loss of a large, relatively new motoryacht that sank at the dock as a result of a failed raw-water plumbing fitting in… Read more »

For pure fun, speed, and versatility on the water, it’s hard to beat the family runabout. Whether for fishing, picnicking, waterskiing, or just whizzing around on a sunny summer’s day,… Read more »

Clients and colleagues around the world regularly contact me for assistance with onboard systems problems, troubleshooting, or repairs, and, not surprisingly, many of these involve fuel systems. Recently a client… Read more »

Candidate products from a variety of vendors competing for innovation awards at IBEX—the annual marine-industry trade show held last fall in Louisville, Kentucky—were arrayed on and around a draped, multilevel… Read more »

By Curtis Miller | category: Wood to Glass | No Comments

In Professional BoatBuilder No. 135, the article “Wood to Glass” previews the making of a virtual exhibit of boats, designers, and builders significant during the years 1940–1970, when wood as… Read more » 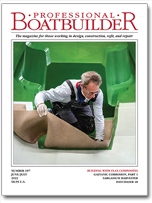