How many times while working around a boat shop or yard have you heard the phrases “Don’t sweat the small stuff”; “Keep the big picture in mind”; or “Don’t get… Read more » 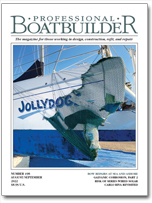