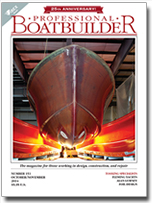 On the cover: Building high-quality tooling to tight specs for some of the best-known manufacturers of composite boats has been the core business for Florida-based Marine Concepts since 1976. As boatbuilding technologies have evolved, so have the demands on this mold builder, which has expanded facilities and hired and trained staff to meet the changing needs of clients. Here, an infused Hinckley T34 (10.4m) hull just sprung from a robustly built Marine Concepts mold hangs between its halves. Story on page 68.

52    H/G-H Pilot Boats, Part 2
by Paul Lazarus
Gladding-Hearn Shipbuilding in Somerset, Massachusetts, owned and operated by the Duclos family, has built hundreds of custom and semi-custom steel and aluminum small craft and small ships since the yard’s startup in 1955—including more pilot boats than any builder in the country.

68    What a Concept!
by Rob Mazza
Specializing in everything from plugs to production molds for 38 years, Florida-based Marine Concepts has spurred its recent growth by offering one-stop shopping for new-product development.

82    Order of Assembly
by John Kecsmar
To prevent distortion in aluminum hull structures, it’s essential to weld the pieces in the correct sequence. But determining that sequence for any given hull requires time, planning, and experience.

96    Fleming: An Asian Pacific Venture
by Steve D’Antonio
Tony Fleming has made a career of building boats in the Far East—starting at American Marine in Hong Kong in 1962 and launching the first of his Taiwanese-built Fleming yachts in 1986.

110    Flight Plans
by Steve Killing
The introduction and refinement of foils presents intriguing design challenges for the C-Class catamaran teams competing for the “Little Cup.”

44    Design Brief
by Steven Weiss
The evolution of lobsterboat hullforms makes a case for the semi-planing cruising powerboat and informs the development of the Neo 41 design.