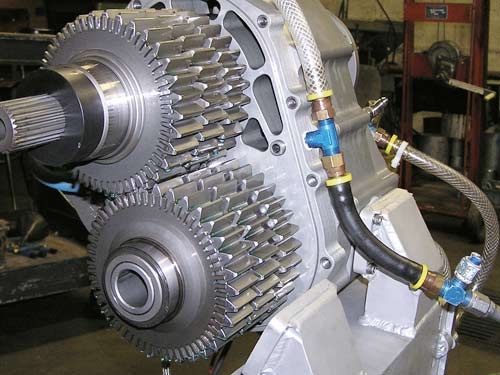 Is this three-speed transmission from Weismann Marine the answer for military or commercial applications?

Many people think of multispeed transmissions as a performance or go-fast accessory for boats, but one manufacturer is hoping to make inroads with military or commercial applications of its three-speed design.

“The military will change the capacity of a boat by 6,000 lbs [2,722 kg], and what I look at is being able to get the boat on plane with the changes in weight,” said Patrick Weismann, president of Weismann Marine in Costa Mesa, California.

Six years ago, the company developed a three-speed transmission and drive for a V-bottom yet to be built, powered by twin diesel engines. The military was the intended user, but after extended testing on a variety of diesel packages, the boat was destroyed by Hurricane Katrina, and funding was pulled.

Weismann still thinks his heavy-duty three-speed transmission would be ideal for military use. The transmission shifts electronically (without a clutch) for the forward speeds, and with a clutch for forward, neutral, and reverse. For the redundancy the U.S. Navy demands, the transmission can also be used as a crash box. If a clutch burns out, you still shut down the motor, shift the transmission in gear, and have the three speeds available. “We went way out in left field on that box,” said Weismann.

“You name the conditions, and [the military has] to run through them,” he said. “And they always have the wrong gear ratio for the conditions and the load. We were giving them better engine performance for the sea state.” 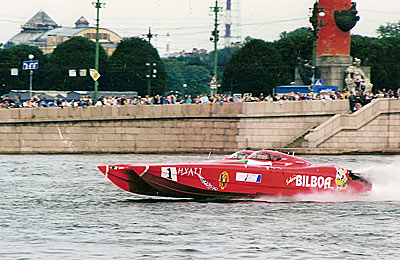 Powered by diesel engines and a four-speed Weismann transmission, this boat won the Class 1 Pole Position Championship in 1998.

Weismann knows of what he speaks. In 1999 and 2000 his four-speed transmissions helped propel Dubai’s Victory Team to the Class 1 offshore racing world championships. (Multispeed transmissions were banned from Class 1 competition after 2000.)

The gears can be set up for the boat to run at peak efficiency in myriad conditions. Multispeeds help manage the boat’s manners, and under hard acceleration they relieve some of the load on the engines. All the transmissions shift with an electric solenoid.

Weismann said that his company’s multispeed transmissions are effective because the split in the gear ratios is realistic. From first to sixth in the high-performance gearbox, there is only a 16% overall difference in the ratio.

“If you gear it to run top end, you fry the prop at the low end,” he said. “If the ratios are spread out too far, you’ll do the same thing.”

To showcase the transmission, the company is building its own V-bottom hull and powering it with twin marinized Ford 6.7-liter (409-cu-in) diesel engines. The company had been involved with marinizing projects employing General Motors’ Duramax diesels, but none have been brought to market yet, so Weismann decided to put together his own package. “The thing about the military is, if there’s something on the market that’s available, they’ll buy it,” he said.

In addition to military craft, Weismann is confident that his multispeeds would work well in commercial boats such as work skiffs or towboats. “There are people trying to use [multispeeds] for towing, and the ratios they’re using aren’t even close to what is needed for marine,” he said. “We can make the difference between getting on plane or not.”