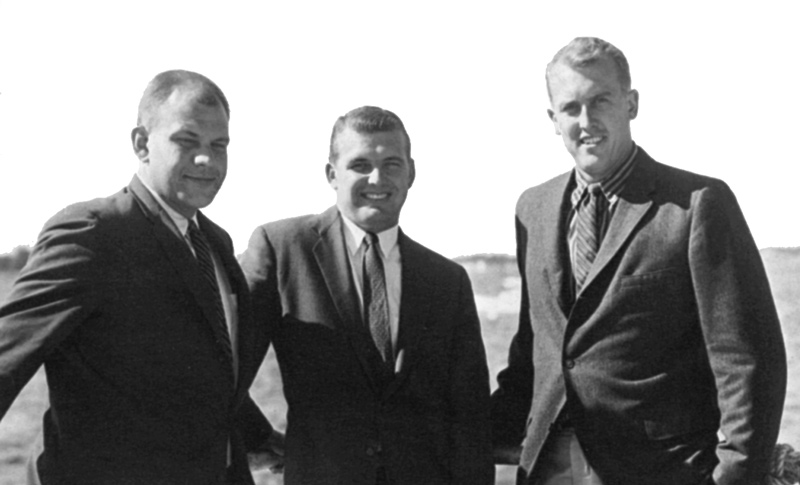 Pearson Yachts was founded in 1956 by (left to right) Fred Heald and cousins Everett Pearson and Clinton Pearson.

If one had to choose the most influential person in modern composite boatbuilding, you wouldn’t lose any points naming Everett Pearson, who died on Christmas Eve 2017 at age 84.

Pearson’s six decades in the boating business began while he was a senior at Brown University majoring in economics and was captain of the football team. He and cousin Clint Pearson made a plug for an 8‘ (2.4m) fiberglass dinghy and to produce it rented space in an old textile plant on the Bristol, Rhode Island, waterfront. The Cub Dinghy was followed by the Plebe daysailer in 1957, five runabouts and the Pacer skiff in 1958, and in ’59, most notably, the Carl Alberg–designed 28‘6“ (8.7m) Triton auxiliary sailboat, often credited with launching the fiberglass boat into respectability. No longer were critics saying, “If God wanted fiberglass boats, He would have made fiberglass trees.” The idea for such a boat originated with Tom Potter, a marketer associated with another boatbuilder in Rhode Island that was already trying to promote the Block Island 40 (12.2m), and not very successfully. Potter approached Cape Cod Shipbuilding and Sparkman & Stephens, who each told him the Triton was a bad idea. When he asked the Pearson cousins, Everett later related, “Being young and not knowing any better, we said, ‘Sure.’” Over the next nine years they built 712 of them. Numerous other models in sail followed, plus a few in power that didn’t sell as well. 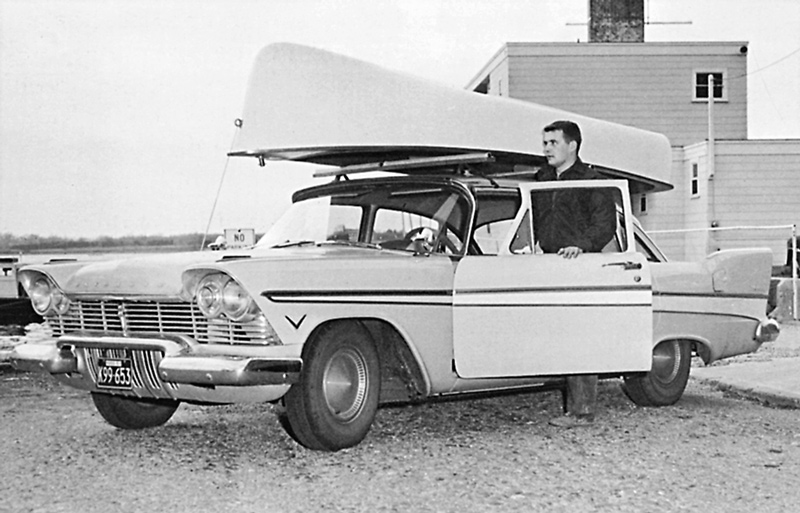 Pearson Yachts’ first boats were small dinghies and runabouts, such as the 12′ (3.7m) Pacer, shown here on top of Everett Pearson’s 1950s-era Plymouth.

I had the privilege of talking boats with Pearson on a number of occasions over the ensuing years. One of my strongest memories is recounted in my book Heart of Glass, in which Pearson debunked the popular notion that early fiberglass builders relied on wood boat scantlings to determine laminate thickness. One day, while working on the dinghies in Bristol, Dr. Press Veltman of the W.R. Grace Co. walked into the shop, chatted up Pearson, and offered the resources of his company in several significant areas. Pearson told him of problems with gelcoat cracking, even with premium materials from Glidden, Schenectady Paint & Varnish, and Naugatuck. “He taught me how to blend titanium dioxide into an inert polyester,” Pearson said. “We started making our own gelcoat that was better in gloss and crack resistance than anything on the market.” And when Pearson told Veltman about his plans for the Triton, saying he was “trying to determine how strong to make this boat,” Veltman told him to talk to designer Alberg and “find out what the loads are, make up some pieces, and we’ll test them.” W.R. Grace’s test lab provided Pearson with data that was used to engineer a minimum 3:1 safety factor on most of the structure for the boat falling off a wave, and 5:1 for the ballast. “We spent the time to test our laminates,” Pearson said. “But I can honestly say that 90% of the other boatbuilders had no idea. They were just slopping this stuff in and building the boats up.” 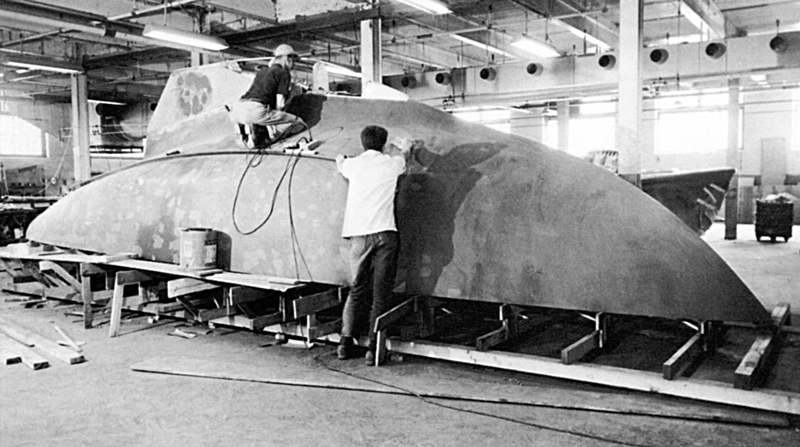 The wooden plug for the 28’6″ (8.7m) Pearson Triton auxiliary sailboat was lofted from the shop floor in the company’s first facility, an old textile plant on the Bristol, Rhode Island, waterfront.

Grumman Aircraft Engineering Corp. bought controlling interest in Pearson Yachts in 1960. Clint left in 1964 and Everett in 1966 to partner with latex king Neil Tillotson to form Tillotson-Pearson Industries in a new facility in Warren, Rhode Island. When his five-year no-compete clause expired, he turned again to boat production: Garry Hoyt’s Freedom line of sailboats with unstayed rigs, Rampage sportfishermen, J Boats (beginning with the hugely successful J/24 of which more than 5,000 were built), Alden sail yachts, and cruising catamarans for the French Lagoon brand.

Not one to put all his eggs in one basket, Pearson diversified into industrial and unusual products: 27‘–65‘ (8.2m– 19.7m) wind turbine blades for Kenetech Windpower, flatbed tractor trailers, bus bodies, airport people movers, Disneyland car rides, lighting poles, electric car bodies, bridge components, test torpedoes, and one of his favorites, the Swimex hydrotherapy pool that functions as a water treadmill. It’s a mix unmatched by any other boatbuilder.

In 1993 Pearson partnered with Seemann Composites of Gulfport, Mississippi, and Hardcore Composites of New Castle, Delaware, to promote and license the SCRIMP (Seemann Composites Resin Infusion Molding Process) closed-mold method of infusing fiberglass, carbon fiber, Kevlar, and other fabrics with resin. The high reinforcement-to-resin ratios of around 70:30 were impossible with hand layup; and perhaps even more important, VOCs (volatile organic compounds) were captured and exhausted from the workplace. He once said one of his proudest achievements was making the laminator’s job cleaner and healthier, boosting employee morale.

Pearson also is one of several persons who claim to have been first to orient balsa wood on the end-grain for use as a core material. He publicized an experiment in which he sank a sandwich panel of glass and balsa off his dock for a lengthy period, after which he showed that water migrated little beyond a superficial penetration. End-grain balsa became a commonly utilized core in hulls and decks for its light weight, stiffness, and superior stability over some foams.

While not the first person to build production fiberglass boats, as some believe, he and his cousin Clint were certainly prominent at the dawn of the new industry. Everett’s foresight and innovations earned him the admiration and respect of more than one generation of boatbuilders.